arlier this morning, No. 15 Ranked Player Luis Scott-Vargas had been inducted in the Hall of Fame, and even before, with five Top 8 finishes at the Pro Tour and one win along with numerous other achievements, the man known all over the world as "LSV" hardly needs an introduction. Facing him this round was an almost just as famous player: Paul Rietzl, who has three Top 8s and one win to his name.

Clearly, this was a battle of giants, and it also pitted both of the most prominent teams against each other, Luis Scott-Vargas being captain of Team ChannelFireball and Rietzl a member of Team StarCityGames. As befits such an illustrious pairing, both players entered the round with unblemished records of five wins, zero losses. However, only one of them would advance to 6-0... 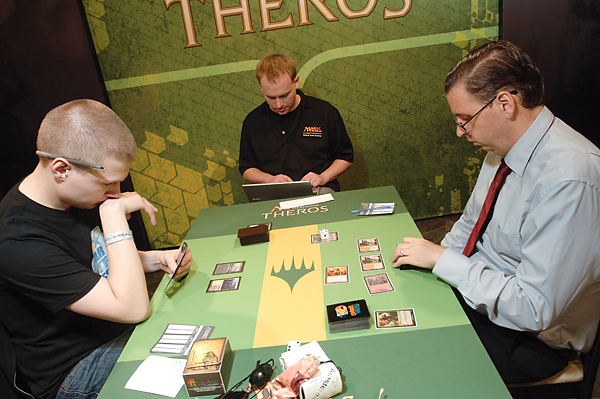 Paul Rietzl, Pro Tour Amsterdam 2010 champion, sat down with a deviation from Team StarCityGames' deck of choice. His opponent, No. 16 Ranked Player and Hall of Famer Luis Scott-Vargas, chose to go with his team's deck of choice.

Scott-Vargas was piloting ChannelFireball's Nykthos Red, a slightly more midrange-oriented deck devoted to red to such an extent as to be able to really abuse the power of Nykthos, Shrine to Nyx and activate the monstrous ability on cards like Ember Swallower or Stormbreath Dragon.

Rietzl on the other hand didn't go with the decklist most of his teammates decided to play. The majority of StarCityGames players had chosen Mono-Blue Devotion. Rietzl, however, went with an Orzhov Midrange deck. As he explained later, "I think there's a real advantage to playing something different from the rest of your team. If people expect you to run a specific deck that really affects mulligan decisions."

According to Rietzl, his deck's match-up against red decks isn't very good though. "It's better against this specific version of the red deck, because slow cards like Ember Swallower don't bother me that much and can always be taken care of with Doom Blade or Hero's Downfall if they do, but if the red deck has an aggressive opening there are simply too many bad cards like Read the Bones in my deck."

And indeed, Scott-Vargas started aggressively into the first game with Ash Zealot and Domri Rade, while Rietzl took Xenagos, the Reveler out of Scott-Vargas's hand via Thoughtseize. Rietzl's first creature came down on turn three in the form of Precinct Captain. Meanwhile, Domri Rade turned up some creatures, but what Scott-Vargas really needed was land. Turn four, he simply cast a Burning-Tree Emissary and passed the turn. Scott-Vargas's next land was Temple of Abandon which still didn't provide the much-awaited fourth mana to cast Purphoros, God of the Forge. Another Ash Zealot off Domri Rade, however, still put Scott-Vargas in a definite lead, both on the board and in the lifetotals. Hero's Downfall took care of Domri Rade but now, finally, Purphoros came down, joining Ash Zealot and Burning-Tree Emissary. A last ditch-effort Read the Bones from Rietzl didn't deliver an answer, whereas Purphoros did deliver the final points of damage.

"I could have cast Precinct Captain on turn two instead of Thoughtseize on turn one. Maybe that would have been better," Rietzl wondered. "Well, you would have taken a ton less damage that way," Scott-Vargas offered dubious advice. In the end, both players agreed that against the average draw of the red deck, turn one Thoughtseize was the better play. "You had a weird hand," Rietzl commented. 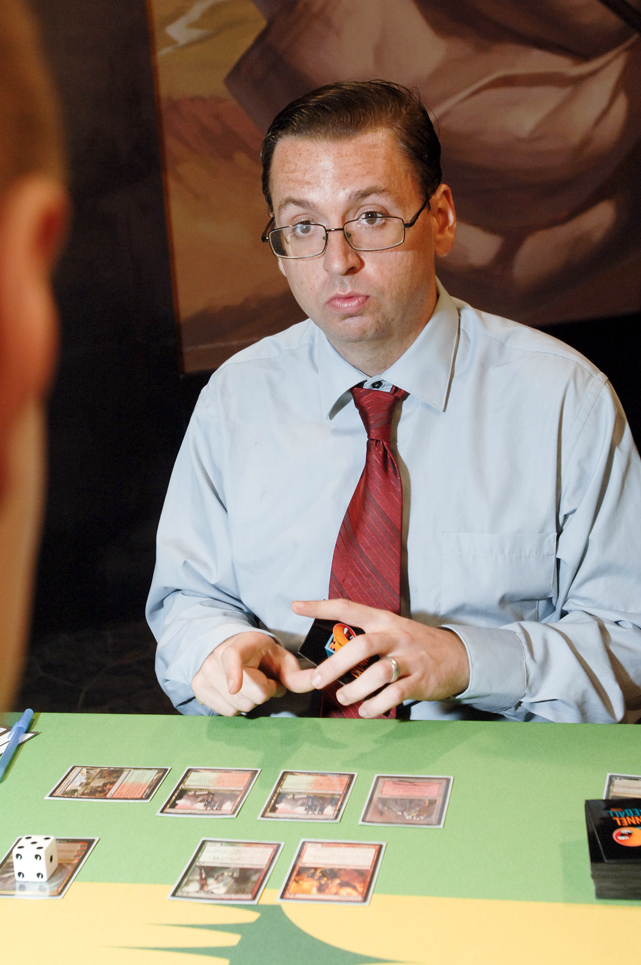 Scott-Vargas shows off how his team's Red Devotion strategy can pack a punch.

Game 2 was an entirely different affair, as Rietzl had Soldier of the Pantheon on turn one, then Precinct Captain, then Doom Blade for Scott-Vargas's Ash Zealot. Boros Reckoner stopped Rietzl's offensive, until Rietzl took to the air with Deseceration Demon. He lost the Demon to Domri Rade instigating a fight between the 6/6 and Boros Reckoner, but that left the way clear for his ground assault to continue. Precinct Captain's growing army of soldiers soon evened the score.

Talking about the match-up between their two decks during shuffling, Scott-Vargas admitted he had not tested a lot against Rietzl's deck. "You probably haven't even seen all the cards in here," Rietzl teased. "I haven't really been surprised by anything so far," Scott-Vargas quipped without missing a beat. 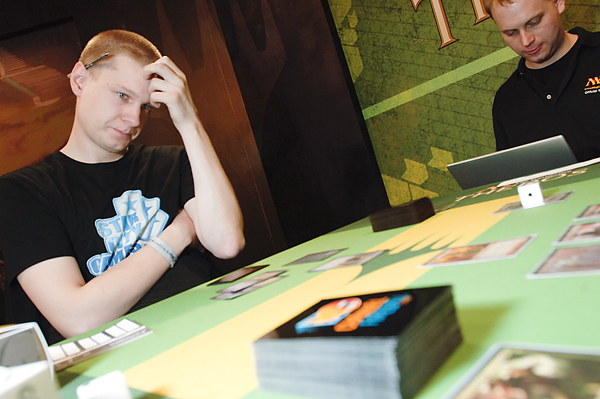 Rietzl's Orzhov deck packs plenty of powerful early creatures and is backed with some efficient removal.

"Did you think I was playing the blue deck?" asked Rietzl.

"Yeah," said Scott-Vargas with a shrug. "But it didn't change anything."

The final game ended on a rather anticlimactic note. Scott-Vargas cast one spell, Ash Zealot which met Doom Blade, before playing Nykthos, Shrine to Nyx on turn three and passing without further play. No land on turn four and no play either. A second Nykthos allowed him to get an Ember Swallower onto the battlefield but left him with just three lands still. In the meantime Rietz had already summoned an army of two Soldiers of the Pantheon and Desecration Demon. Hero's Downfall destroyed Scott-Vargas's only blocker and, with it, his undefeated run in the tournament.