Both of these teams entered the fray this round with scores of 4-1, still well in contention for Day 2. For yet another Day 2, one should say, in the case of Germans Manuel Mayer, Lukas Tajak, and Wenzel Krautmann. The latter has four Top 8s to his name including one win, while Mayer has two and Tajak has one. Their competiors were still looking to make a name for themselves, so ... why not start here?

In the first match to finish, Wenzel Krautmann and his 15-land blue-white deck faced Neil Ramos and his blue-red. The former opened on Vaporkin, Akroan Skyguard, Elite Skirmisher, and Aqueous Form. Ramos's Lightning Strike and Hammer of Purphoros, despite being good cards, weren't nearly enough to stave off such an onslaught. 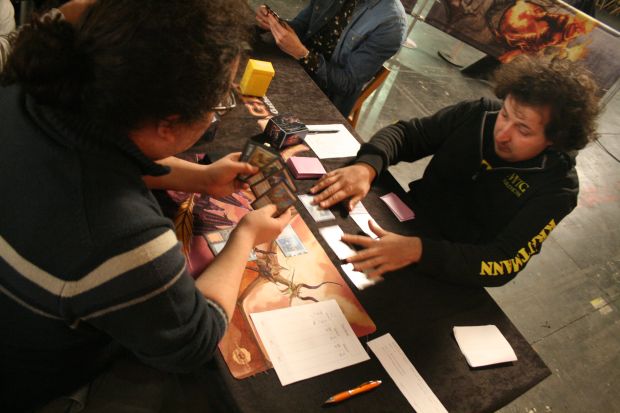 In the second game, while Krautmann managed to combine God-Favored General and Aqueous Form for a steady supply of tokens, this time it was Ramos who brought the beats. It took a while for Kragma Butcher, Borderland Minotaur, Fanatic of Mogis, and Thassa's Emissary to punch through all the tokens, but in the end Ramos managed to get there.

For game 3, Krautmann began with Leonin Snarecaster and Elite Skirmisher. The latter was Chosen by Heliod to tap down Ramos's first creature, and Krautmann added yet more pressure in Vaporkin. When Ramos waited for Krautmann's turn to kill it with Searing Blood, he was summarily blown out of the game by Dauntless Onslaught.

Meanwhile, Lukas Tajak and his red-green deck with a tiny splash of black were paired against Luca Spataro and his green-white. Here, most of the games came down to a simple race. First, Kragma Butcher, Reaper of the Wilds, Nessian Asp, and Archetype of Aggression were faster than Spataro's Wingsteed Rider plus Ordeal of Nylea. Then, Spataro returned the favor with Favored Hoplite, Ordeal of Nylea, Archetype of Courage, Setessan Oathsworn, and Nyxborn Shieldmate—a draw that's nigh-unbeatable. 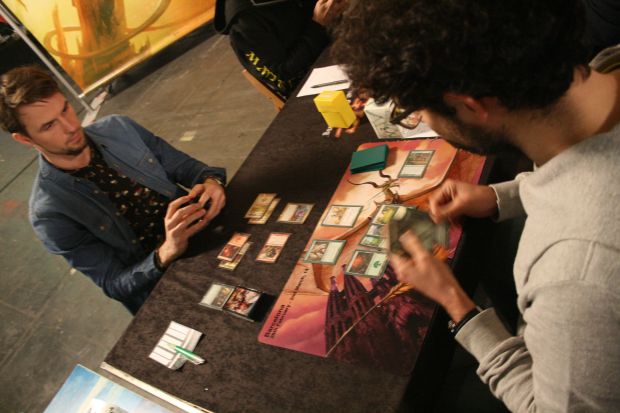 The end, however, was rather anticlimactic. Tajak was stuck on two lands, discarded at end of turn again and again. And one more time and then he conceded.

So it all came down to the pairing between Manuel Mayer piloting blue-black and Matteo Grigoli on black-green splashing blue. The first game was a long and grindy affair. Grigoli took an early lead through superior single card quality with Erebos's Emissary and Nessian Demolok, but yet Mayer threatened to take control when he combined Black Oak of Odunos and Aerie Worshippers. Grigoli's Sea God's Revenge allowed him to push through a dangerous amount of damage, but Whip of Erebos allowed Mayer to recoup enough life quickly enough that Grigoli's tempo gain was rendered irrelevant.

In the second game, Mayer, after leading with Servant of Tymaret, took a peek at Grigoli's hand per Disciple of Phenax. What Mayer saw, amongst other things Nessian Wilds Ravager and Pharika's Mender, gave him pause. He tried to quickly drain all of Grigoli's life via Gray Merchant of Asphodel and the Servant, and he probably would have gotten there with a little help from Retraction Helix too—if it hadn't been for Grigoli's Dark Betrayal and Time to Feed. As it was, he succumbed to a 12/12 Nessian Wilds Ravager and Arbor Colossus many turns later. Meanwhile, time was running out; merely four minutes remained on the clock. Fortunately, the deciding game didn't take long to decide. Unfortunately, it was decided largely by Grigoli mulliganing to four. By the time he drew his second land, Mayer had already created two tokens off Aerie Worshippers and effectively clinched victory for his team.