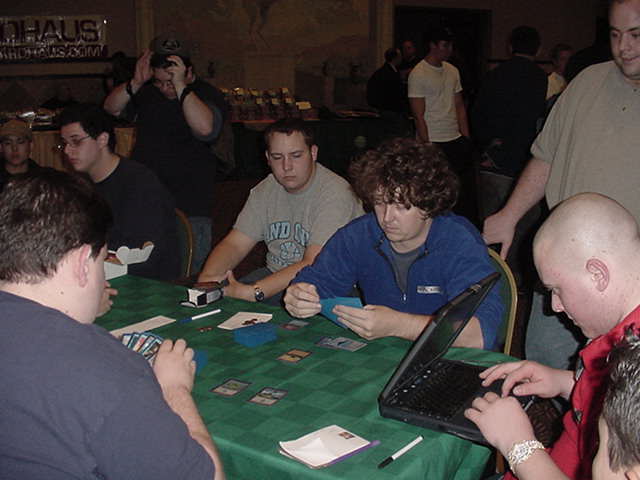 In round 6, two accomplished veterans sat down to see who would move on to be undefeated going into the last round. Alan Comer, who is a veteran Pro player with many top 8's, was pitted against Steve OMS, former PTLA champ, and Grand Prix champ. Some might consider this a match of two of the older, more accomplished veterans, who aren't as volatile as they were in their prime. Other such examples are Gary Wise, who is currently falling off the Gravy Train.

In a stunning upset, Alan Comer has developed a bizarrely original deck that he believes is great in the current environment. He's gone back to his Turbo Xerox roots and come up with a 10-land special. Cantrips and Land Grants haven't let him down so far as he sat down with a 5-0 record. His weenie deck kills with Quirion Dryads (!) and they also give the deck its new name: Miracle Grow. OMS is running the deck that Miracle Grow was designed to beat: Donate. 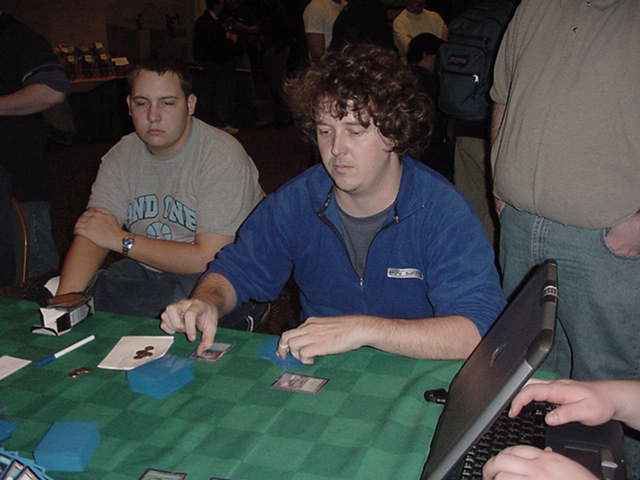 Alan started off quick in Game 1 by using a Land Grant with alternative casting cost, with Force of Will backup. Not much of a gamble as Steve OMS would need two Force of Will's to land screw Comer. Steve did not have two Force's, and Alan got a Tropical Island into play, using it to cast many weenies. A small counter war took place over a Gaea's Skyfolk, but was won by Alan, and the first creature hit play. Soon after the Skyfolk, a Quirion Dryad hit play, and was pumped by Alan's cheap mana cost cantrips, as well as alternative casting cost counterspells. A Daze, Gush, and Force of Will later, and Steve was packing up for game 2, muffling cursing words under his breath. 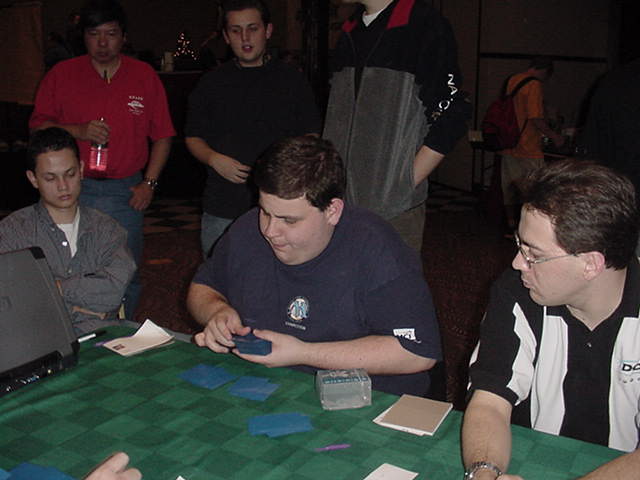 With Alan winning the first, Steve chose to go first once again. He also chose to try to counterspell Alan's creatures again, which I believe is a weak strategy. A counterwar ensues on a second turn Dryad, which Alan wins using 2 dazes on a Force of Will and counterspell. A Merfolk Looter is played, and since Steve spent so many resources on the Dryad, it resolved. Steve's next few turns included a Sapphire Medallion but not much else, as Alan pounded away with his weenies. Alan used spells such as Gush and Brainstorm to keep the Dryads growing, while Steve could do nothing but sit and stare at the Mystical Tutor in his hand. He finally casts the tutor, fetching an Earthquake. Little does Steve know Alan's hand is packed with counters, and the game is all but a lost cause. Alan's deck was just too quick off the draw against slower draws from the popular Illusions Donate combo deck. A Land Grant revealing two Force of Wills ensures the game is locked, and Steve soon concedes.