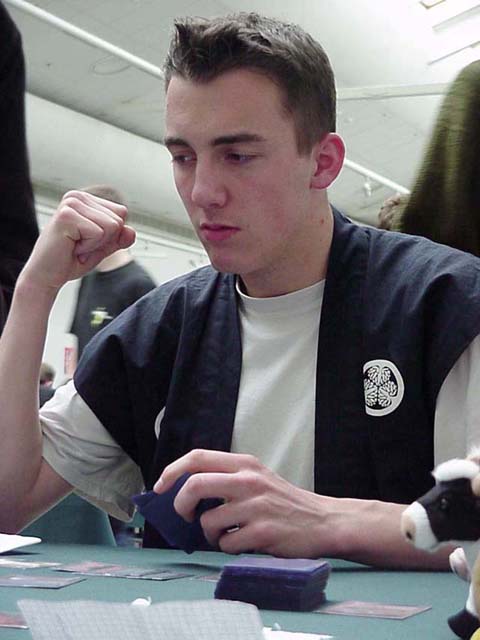 Both of these experienced competitors were 5-0 going into this round. Olivier was accompanied in this match by a menagerie of stuffed farmyard animals - and suffering from their influence - Alex had to take a mulligan.

Olivier went first and summoned a second turn Galina's Knight, whereas Alex had to wait until his third turn to cast a Shivan Zombie, since his lands were both Urborg Volcanoes.

Ruel therefore had time to cast a Fact or Fiction, but it was, in Alex's words "the worst Fact or Fiction ever", since it revealed five lands. Olivier took the pile containing two black mana sources since he didn't have any, and all Shvartsman had to offer was a Nightscape Familiar.

The Frenchman's first attempt to stop Alex's attacks with a Teferi's Moat were to no avail, as Alex had a Thunderscape Battlemage, but Olivier had another one and this time it stayed in play.

Next, Ruel tried to get Dromar into play, but it was Terminated and the players traded beats from Alex's Nightscape Familiar, and Ruel's Galina's Knight. Alex once again was ready with a Terminate, as Olivier played a second Dragon.

By casting lazing Specter, Alex forced Olivier to cast Rout, and thus emptied the board of creatures. Now that Shvartsman had plenty of lands in play he was able to use the Pyre Zombie he drew to it's full potential, and recurse it every turn.

Ruel was hoping to draw Dromar, but he had to sit there instead as his deck offered up nothing but Counterspells turn after turn. He stayed alive for a long time with the help of Absorb, Exclude, and Dromar's Charm, but ultimately Dromar, the Banisher was the only thing that could have saved him and he didn't draw it.

Perhaps Olivier could have been more circumspect about casting his Dromars, in which case he might have been able to use his Lobotomy on Alex's Terminates, and maybe keep the Dragon in play.

Olivier got off to a rapid start again in the second game, with a second turn Galina's Knight. Shvartsman replied with a Shivan Zombie. They traded blows, with Olivier deciding not to counter Alex's Pyre Zombie with his Dromar's Charm.

Alex had the mana to play the Battlemage and it's kicker ability, and did so. Olivier discarded Hobble, and Dromar's Charm, leaving him with another Charm and a Fact or Fiction in hand. Shvartsman swung with all his guys as Olivier did nothing - the Thunderscape Battlemage died to Galina's Knight but the attack reduced him to nine. Ruel used his Fact or Fiction, and this allowed him to find a Crusading Knight. Despite this he was very low on life as Alex had a Shivan Zombie, which the Frenchman couldn't block, and Alex still had his Pyre Zombie in play from the third turn. Olivier had to use a Dromar's Charm to stay alive as Alex attacked with all his creatures. 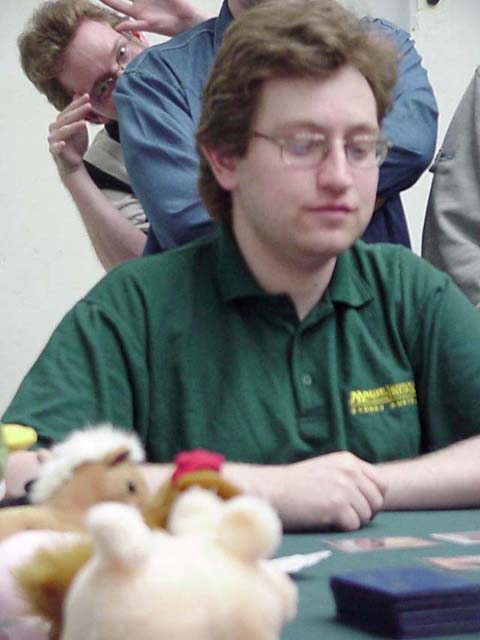 This all-out attack meant that Olivier could swing back with Crusading Knight and Galina's Knight, and put Alex on six. Ruel top-decked an Absorb, which gave him exactly enough time to win with the Crusading Knight, since Shvartsman now had to recast the Pyre Zombie to win.

Alex played first but decided to take a mulligan. Olivier had a good hand spell-wise but no white mana. Olivier asked his Chicken for help with whether or not he should mulligan, and interpreted it's crowing in the negative.

He kissed a stuffed animal when his decision to mulligan was immediately rewarded with a Plains and played second and third turn Galina's Knights. The American, meanwhile, only had three Mountains, and didn't manage to cast a spell until he was on six life, when he finally drew a Swamp. By then, Olivier had two Absorbs in his hand and Alex couldn't get a blocker in play in time.

Alex's second hand in game two was good enough that he could have won despite his mulligan if he had found a source of black mana quickly enough as he had 2 Shivan Zombies and a Blazing Specter, but he only drew another Mountain