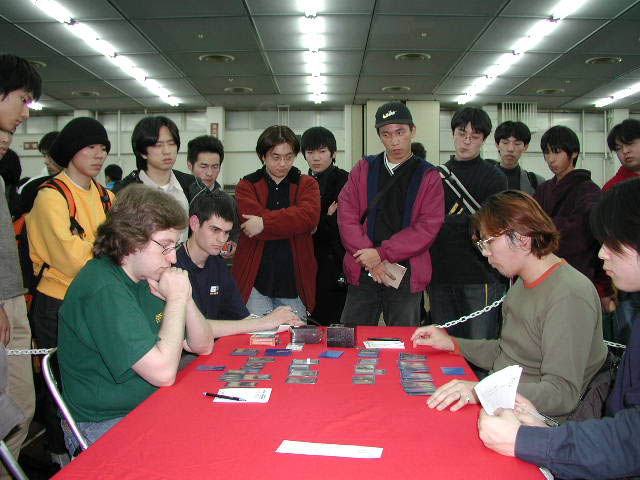 This round featured top pro Alex Shvartsman against current Japanese National Champion Tsuyoshi Doyama. Alex is playing black/blue/white and is quoted as saying 'I actually have to think today, I'm playing Plains'. Tsuyoshi is playing white/blue/black/green with some very powerful rares, including Dromar and Tsabo's Assassin.

Game one started out with Alex winning the die roll and playing. His opening hand was Salt Marsh, Plains, Swamp, Agonizing Demise, Faerie Squadron, Shoreline Raider and Tidal Visionary. Alex started off with a 2nd Tidal Visionary, 3rd turn Shoreline Raider and 4th turn Agonizing Demise for Doyama's Pincer Spider. Alex was applying the early pressure until things were slowed down by a Repulse on the Shoreline Raider. Doyama played a 2nd Pincer Spider and Alex played 5th turn Faerie Squadron with kicker and next turn Probe with kicker, discarding Swamp and Plains, Doyama throwing Vodalian Serpent and Kavu Climber. Doyama's 6th turn saw Glimmering Angel played which was Armadillo Cloaked the following turn. This is where the game was looking good for Doyama especially when Alex's next four turns were Dream Thrush/Shoreline Raider, Dream Thrush, nothing and Plains.

A Tsabo's Assassin helps to clear out the blockers and when Alex triple blocks the Cloaked Angel with Faerie Squadron and two Dream Thrush, Doyama Spite/Malice on the squadron taking out all three of Alex's creatures. Alex scoops.

Game two is the most epic game of the day. Alex sideboards in one Armadillo Cloak, one Wax/Wane and one Forest (plus he has Dream Thrush). Alex gets off to a good start with 1st turn Tidal Visionary and 2nd turn Benalish Trapper. Doyama's first three turns are forest, forest, plains, harrow, setting his mana base up nicely. A Glimmering Angel joins Doyama's forces on turn four and he summons a tapper of his own, Stormscape Apprentice. Doyama's Glimmering Angel is comes to a painful Demise and Alex casts a Samite Archer which is going to control the board. In due course the Apprentice gets pinged and Alex slowly but surely is depleting Doyama's life. It is Doyama's turn to Probe this time, forcing Alex to discard a well held back Swamp and Plains.

It is looking like Alex will ride the tappers and Samite Archer home until the end step of turn nine when Doyama plays Rout as an instant. Alex thinks about his options carefully here as he is holding Repulse, Armadillo Cloak and Exotic Curse. Alex decides to bounce the Benalish Trapper to his hand with the Repulse, hoping to draw into some green mana to Cloak the trapper.

Doyama plays a Benalish Heralds the turn after Rout and plays his own Armadillo Cloak the following turn, gaining him some much needed life. This is until the Heralds is controlled by the tapper but is still able to draw Doyama valuable cards as an instant. Alex plays a Razor Tooth Griffin and Probe with kicker but this time the probe is countered with Spite/Malice. Doyama plays Tsabo's Assassin which would be game, but Alex has been holding the Exotic Curse specially for this guy.

The heralds are gaining Doyama crazy card advantage and he plays a Pincer Spider with kicker and next turn a huge smile comes to the face of Doyama when he draws Dromar. He has plenty of mana to play with but so does Alex who has a newly cast Armored Guardian. The guardian in combination with numerous fliers looks like it may be able to hold off the rather large Dragon.

Doyama decides it is time to lay the smack down so brings it with everything. At this point things get interesting. We have Dromar, Benalish Heralds with an Armadillo Cloak on them and kicked Pincer Spider coming over. Dromar gets tapped by Stormscape Apprentice, Faerie Squadron Blocks the cloaked Heralds and Armored Guardian Blocks the spider. Alex then gives the heralds protection from green making the Armadillo Cloak fall off, or so you would think, but Armored Guardian can only give your creatures protection from a color. This was not pointed out until after the game had finished so it could not be taken back and corrected. 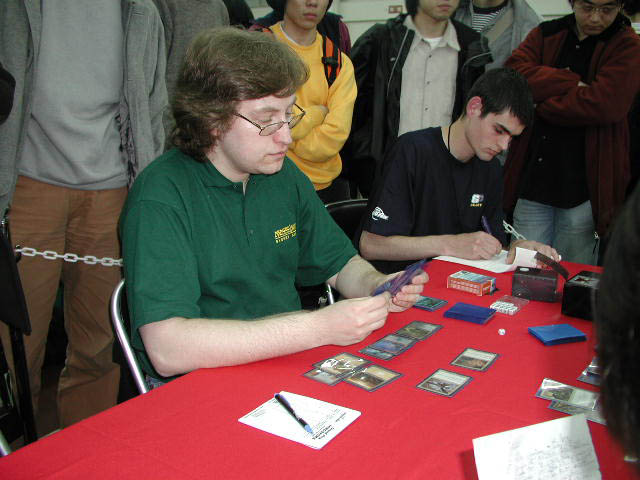 Doyama had been going crazy with the heralds and only had 6 cards left in his deck so he was on a seven turn clock despite having board advantage. This was only this 16th turn and during the end step of Alex's turn Doyama cast Repulse on his Stormscape Apprentice, going to five cards in his library.

On Doyama's next turn he cast Pincer Spider and Vodalian Serpent with kicker and says turn. Alex casts the apprentice again and Doyama uses the heralds to draw another card, leaving him with three cards in his deck. Alex is sitting on six life, Doyama at five, so Alex can not afford to let either the serpent or Dromar through. During Doyama's turn he attacks once again his big creatures, Dromar being chumped by a Razorfoot Griffin, Vodalian Serpent meeting with a protection from blue apprentice (Armored Guardian) and Pincer Spider getting squished by a pro-green Faerie Squadron and Armored Guardian.

Funnily enough after fending off barrage after barrage of dragon, serpent and spider attacks, Alex gives his Faerie Squadron protection from green to get around another spider holding the fort and the apprentice deals the final point of damage with it's ability. With two minutes left in the round both players agree that this one will end in a draw.