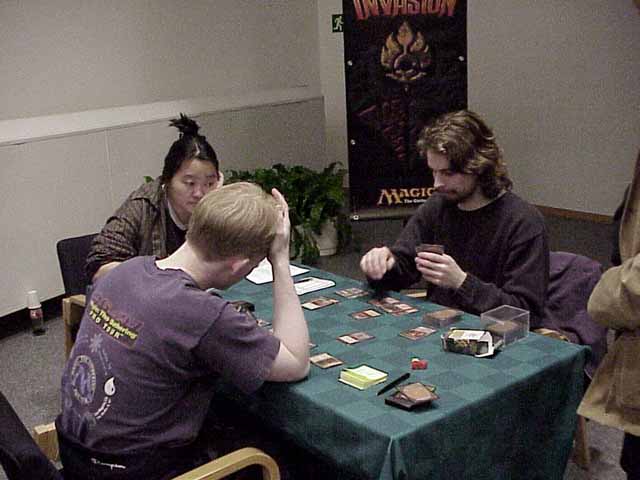 In the sixth round, Ben Ronaldson from the United Kingdom faced Arto Hiltunen from Finland in a rather tense match. Ben was with red, blue and black, while Arto had a black, green and white deck. The Englishman won the die roll, and he chose to play, unfortunately having to mulligan once before he got a hand he could keep.

Ben summoned a turn one Nightscape Apprentice and then he followed up by playing a turn three Cinder Shade. Arto, on the other hand, dropped a turn two Ravenous Rats that took a mountain from Ben's hand, and then he played a Noble Panther.

The Englishman had a Tsabo's Assassin though, and he cast it on the following turn. Arto then chose to play a Power Armor that more or less forced Ben to deal with the Noble Panther - he attacked with the Cinder Shade, pumped it and then sacrificed it. Ben then made the assassin kill the Ravenous Rats, and passed priority.

The Assassin didn't get any more assignments though, as Arto Shackled it down. The Finn then cast a Pincer Spider with kicker, followed by an Andradite Leech. Meanwhile, Ben got a Nightscape Apprentice into play, and he used its ability to bounce the Assassin back to the top of his deck. At that time he was pretty low on life, and when his re-cast Assassin was Exotic Cursed, he scooped.

What may probably be called the prelude to what happened in the second game took place in between the two games. Arto spent quite some time shuffling, and while he was pileshuffling, Ben noticed that some of his sleeves were more worn than the others. Both players kind of agreed that it would be better if he took the sleeves off, and Ben called a judge just to make sure that there wasn't a pattern. Arto seemed to be a bit frustrated because of that. Head judge Cyril Grillon came to the table, and he concluded that 'if I had spent two hours I could have remembered every card in the deck, and if I could, then you could'. So Arto was asked to remove his sleeves, which he did. But the atmosphere of the match had become very tense.

Ben played first in the second game as well, and he played a turn three Cinder Shade. Arto cast a turn two Obsidian Acolyte and a turn three Urborg Drake, and the Acolyte took Ben down to 19 life.

Then, during turn five, Ben put five mana in his pool, played a Duskwalker, said "Duskwalker", put a counter on the creature and passed priority. But Arto stopped him: "You didn't say kicker."

A judge was summoned once again, and he ruled that Ben had a Duskwalker in play and four mana in his mana pool. Ben accepted the ruling, and then he stood up: "I don't want to play against you." So the game ended 2-0 to Arto.