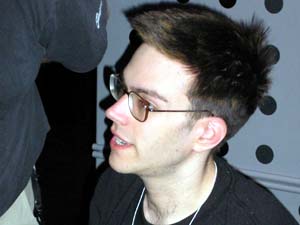 the final round of the day begins, there's a lot of attention on this match-up. Maher is undefeated at 5-0, but Zvi is close on his heels at 4-1. However, Zvi's only loss came in this format earlier, so he's got more to prove than Bob at this point.

Bob's deck was all speed to open things up, dropping turn 1 Rootwalla and then two consecutive s. However, he made what looked like a mistake by placing the second on a tapped land, saving 2 damage for Zvi from the Rootwalla. However, Zvi returned the favor a turn later by cycling a Pulse on the Rootwalla even though Maher had the mana to pump it in response as he got distracted and forgot Bob still had the two mana up. The Rootwalla lived to see another day, and found a friend next turn in the form of a very threatening looking Prowling Pangolin. Zvi mustered some defense in the form of Wall of Blood, but came down to join Maher's already impressive offense and Zvi quickly scooped.

This game was the opposite of the first as Zvi dropped a turn 2 Cabal Interrogator and punished Maher's slower draw that didn't manage to do anything until getting to 4 mana and dropping an unimpressive Earsplitting Rats. Worse, Maher was stuck with only 1 green mana and a hand with multiple double-green spells. Zvi continued to strip cards from Maher until he had 5 cards in hand to Bob's 0, at which point he switched to offense and dropped creature after creature while easily removing Bob's meager defenses. It was a few more turns before the game was officially over, but it was clear much earlier than that that the Interrogator had inflicted too much damage for Maher to recover. 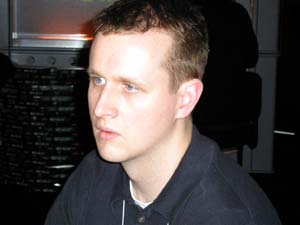 This was easily the best game of the set. Maher started out strong again with an early Rootwalla to put serious pressure on Zvi's starting life of 13. Amazingly enough, the MVP of this game was Aether Rift however, triggering on a Prowling Panguin, then (which Zvi stopped by paying 5 life) when Bob didn't have the mana to cast the creatures in his hand. The Rift continued to put pressure on Zvi, dumping out a stream of fat creatures as Bob had nothing but creatures in his hand (and the one card the Rift whiffed on, a Bearscape he didn't have the mana to cast). Zvi struggled to stabilize the board with Spawning Pit+Gravepact, but his life was dwindling fast. Just when it looked like he'd pull it out Bob played out a and Zvi needed an answer fast as he didn't have the life to survive even one swing with that card out. His deck didn't give him the extra creature he needed to block and sac for Gravepact's effect, and he went down under a storm of angry land. 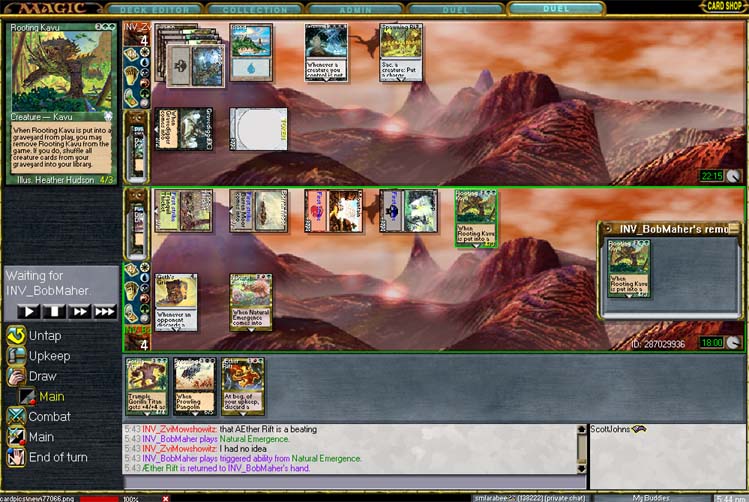