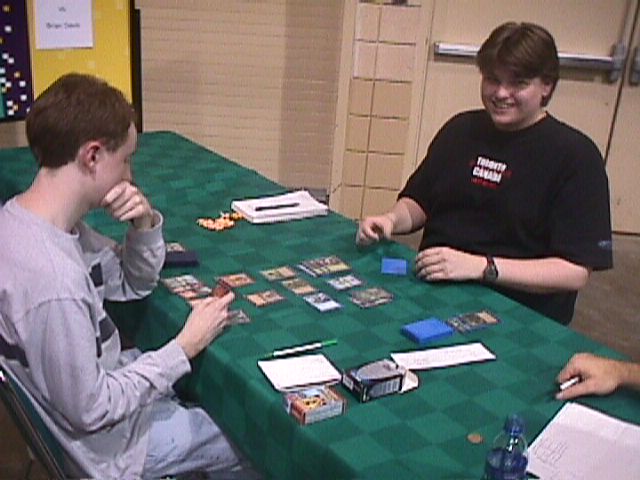 Brian Davis became famous at PT Chicago 99 when he took second place to Bob Maher. While many may not have thought the teenager from Tennessee would fall off the Pro Tour, he has proven to be a consistent finisher.

Eugene Harvey is one of the rising stars of Pittsburgh's CMU. He caught the world's notice at Nationals this year when he t8ed. Since then he has shown he is a solid player.

Both players had strong decks. Davis was playing a green/blue/black deck with three afflicts, and plenty of solid green creatures and powerful blue fliers. Harvey was playing a black/blue/red deck with much removal and card advantage. 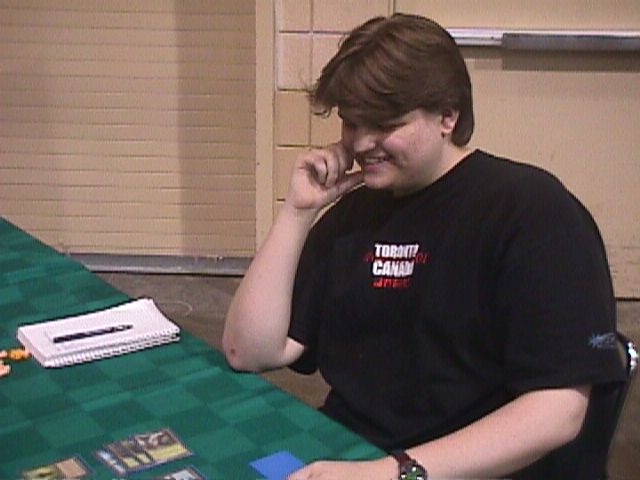 Brian DavisThis game saw a lot of control on Davis' side of the board. First he killed Harvey's first creature, Barbarian Lunatic, with an Afflict. Harvey played the more durable threat of a Dirty Wererat. Davis played and Elephant Ambush which got a Repel from Harvey. His next creature fell to Thermal Blast. Davis used his next chance to drop an Aven Fisher and a Wild Mongrel. These two creatures stuck and Davis started swinging. Later he played Skeletal Scrying to draw some extra cards and press his board advantage. Davis ended up seeing three Afflicts through the course of the game which gave him the card advantage he needed to push through his fliers and win the game. 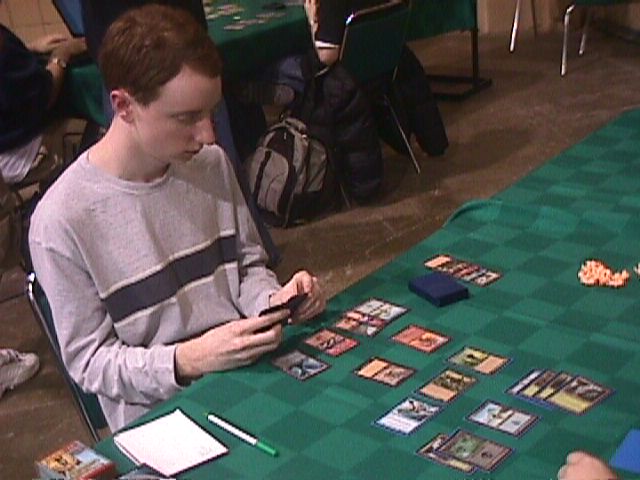 Eugene HarveyHarvey started out with a Lunatic again. Davis came out with his variety of fliers again. Through the course of the game he played two Aven Windreader, and both of the 2/3 protection fliers. Harvey's removal was in full swing though. He used a Thermal Blast twice thanks to a Scrivener. He also played Painbringer which allowed him to finish off Davis' creatures at no card loss. Davis kept losing creatures to Harvey's removal until the final nail in the coffin came down. Harvey played Savage Firecat, a huge 7/7 trampler. Davis conceded to the big beast.

This game, Davis had troubles. He stalled at two mana for the entire game with two Afflicts in his hand while Harvey beat down with several one toughness creatures. Harvey had a Cephalid Looter and a Barbarian Lunatic go most of the distance. All Davis could do was play his turn two Wild Mongrel and take the beats. He conceded to an Acceptable Losses from Harvey.