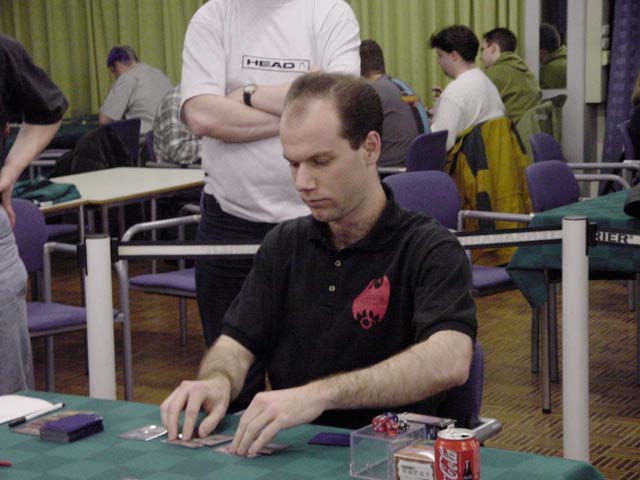 Alex and Dave were sitting pretty on 5-0 going into this round. Due to the high number of players at Grand Prix Amsterdam, day one consists of eight Swiss rounds instead of the typical seven. With a record of 6-1-1 looking necessary to advance to day one neither of these two experienced players want a loss at this stage. Both players were quietly concentrating as they shuffled up for round six.

Like thousands of Sealed Deck players before them, both Alex and Dave had chosen the Black, Blue and Red spells from which to construct their decks.

An early Ravenous Rats from Alex evened up the card count and negated the extra card Humpherys had gained by choosing to draw instead of play. Alex definitely started out the early aggressor and maintained his tempo through the early stages of the game. The Rats were followed by a Sparring Golem and a Viashino Grappler and the beats commenced. Dave's Hooded Kavu was traded for a Zap and the Rats, and a Rage Weaver was cleared out the way via a Scorching Lava from Alex. As the game progressed it was clear both players were suffering from opposite forms of mana problems. Alex couldn't get above three mana whilst Dave could draw nothing but land. Dave dropped a Planar Portal on his sixth turn, but Alex finally drew land number four and put a Smoldering Tar into play threatening to kill anything Humpherys could drop. Unfortunately due to the Portals high six mana activation cost Dave couldn't activate it and still cast blockers. Whilst able to get a couple of cheap removal spells from his Portal the Smoldering Tar still gradually ate away at Dave's life total. With Humpherys on five, Alex cast Breath of Darigaaz with Kicker to sweep the board and Humpherys scooped to the Tar damage during Alex's next upkeep.

There was quite a significant period of sideboarding between games, and the reason for this soon became clear. Dave had chosen to board in a different color - White instead of Red, presumably for a couple of Acolytes against Alex's Red and Black spells.

This time Dave chose to play first. Whilst he started well with a Stormscape Apprentice and a Shoreline Raider he was quickly on defense as Alex played out an Urborg Phantom and a Reckless Assault, forcing Dave to take up blocking duties. Dave was again suffering mana problems this match. Not only had he not seen any White, he was also short on lands and was forced to play out both a Vodalian Serpent and a Faerie Squadron without their kickers in an effort to wear down Alex's life total via the Reckless Assault. To rub salt in the wound the turn after Humpherys cast his Serpent without Kicker, Shvartsman managed to cast one with the kicker fully paid. Short on mana, Humpherys was eventually able to double block the 6/6 Serpent, but the damage he took in the process simply took him too low. Shvartsman played out his hand of Viashino Grappler and Tsabo's Assassin, and despite a Revitalizing Vapors Dave couldn't quite gain enough life to survive Alex's next attack.