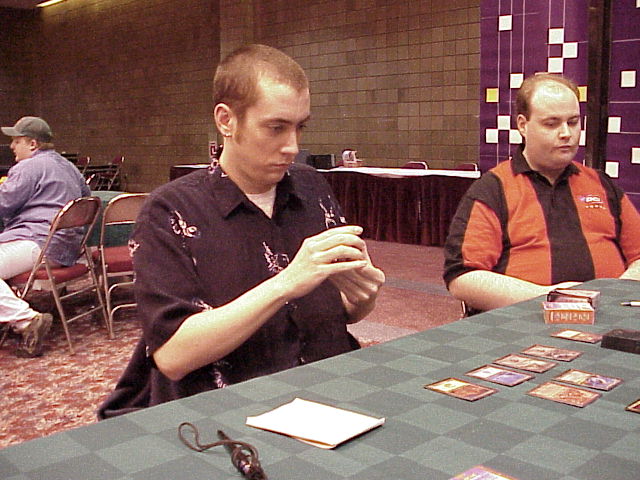 Pro Tour Los Angeles 3 Champion David Price took on Pro Tour New York 4 Champion Casey McCarrel in a round 6 Feature Match. Price was hoping to break out of a yearlong slump and was 3-0 after his two byes. McCarrel was also trying to return to the top of his game and was also 5-0 as Round 6 began. Both players built very similar looking Blue/Black/Red decks - by far the most popular color combination so far this weekend.

Game one was pretty much decided on turn 3. Price played Vodalian Zombie, did not play a land, and looked at me sheepishly as he said, "go." Price was forced to discard on his next turn and he fought quite valiantly after finally drawing a third land, but he couldn't stabilize the board until he was done to just one point of life. A few turns later McCarrel used Do or Die to clear away a blocker and bust through for the deathblow.

Both players had good draws in game 2. They traded creatures and removal for several turns and Price seemed to have an advantage with Ancient Kavu and Vicious Kavu in play while McCarrel had nothing. With 5 lands in play and Do or Die in his hand, McCarrel cast Stun on the Vicious Kavu just to draw another card. He drew Scorching Lava. Knowing that his Stun play made him look fairly desperate, McCarrel thought for a while, did not play a land yet, and tapped two mana for Do or Die. With just one mana left untapped on McCarrel's side, Price chose to keep the harder hitting Vicious Kavu instead of the three toughness Ancient Kavu. That's exactly what McCarrel wanted him to do. McCarrel then dropped his land for the turn, Scorched away the Vicious Kavu, and put the two players into top-deck mode with no creatures in play. 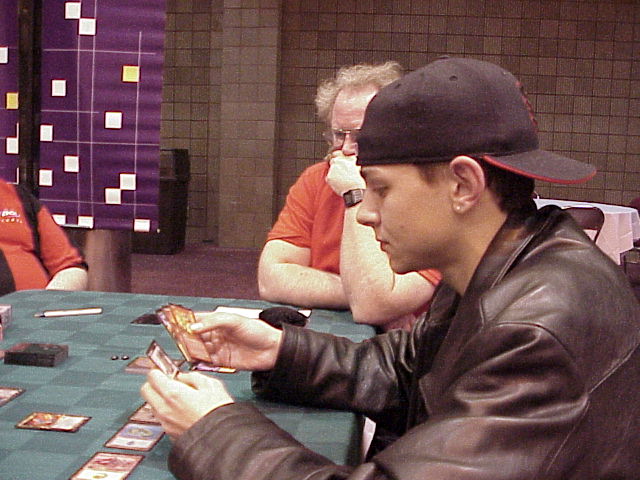 They took turns drawing creatures and removal at about the same pace. McCarrel looked like he was winning when Stalking Assassin stuck around for several turns. McCarrel went for the kill with a Vicious Kavu of his own, but Price had a very clutch Exclude ready. Exclude helped him find a Smoldering Tar, which removed the Assassin and the board was devoid of creatures yet again. Next turn McCarrel drew a Power Armor that wasn't much help. Price seemed happy with his Duskwalker (with kicker), but McCarrel drew Tower Drake. Price couldn't deal with the flier and McCarrel finally won the marathon game.