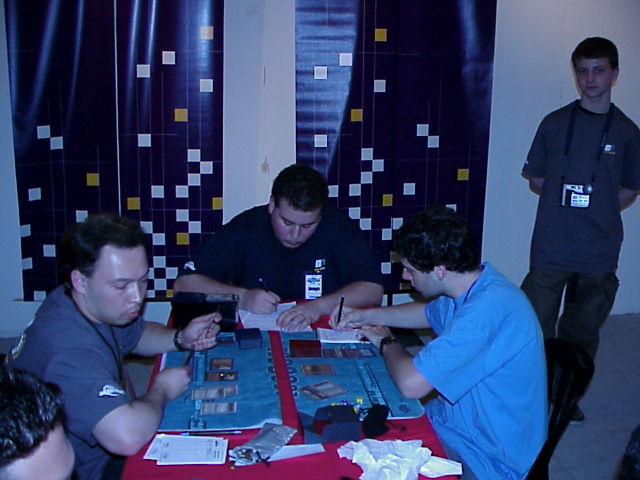 The match between Diego "La Ostra" Ostrovich and Hugo "Ocho" "Baraka" Araixa was very short. Ostrovich is one of the Top Argentinian players; he was on the 2000 Argentina National Team and is in the top of the national constructed ranking with more than 1950 points - which also put him at the top of the Latin American Cnstructed Ranking. Araixa is a great player from Mexico who has been on the 1998 and 2000 National Teams. They both were playing with almost identical decks, a very fast combo deck, the PandeBurst.

The first game started with Ostrovich and Araixa keeping their starting hands. Ostrovich played first. Both started to play lands, a couple of their search cards - then Araixa played an Ancient Tomb. This card was the one who won the game.Araixa played Intuition, and Ostrovich sent a Pandemonium to Araixa's hand and 2 Saproling Burst to the graveyard.Araixa played 2 Frantic Search he sent a Pandemonium to his graveyard, then he played a Duress to assure his combo. He taked out a Intuition (Ostrovich had no counters in his hand), so he played Replenish, in response Ostrovich tried to save the day with a Frantic Search, but he had bad luck. Replenish resolved bringing a Pandemonium and two Saproling Burst.
Game one for Araixa. 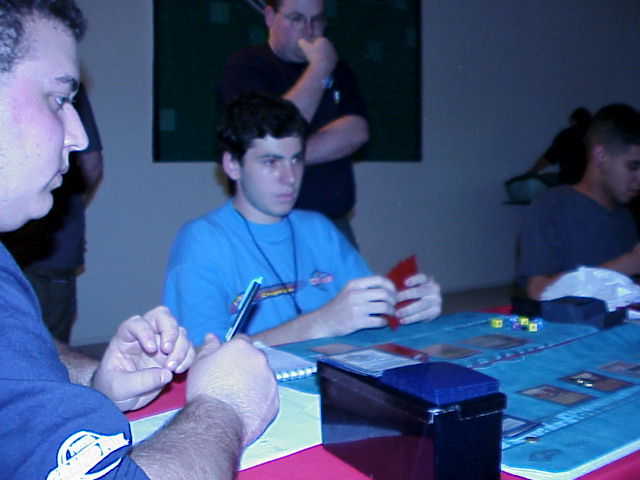 They sideboarded about four cards each.

Second Game:
Ostrovich played first again. They spent several turns playing only lands. Ostrovich started playing spells with an Intuition, but Araixa had a Pyroblast (one of the sideboarded cards). A few turns after that Araixa played a Frantic Search, putting a Pandemonium into his graveyard. Then, two turns later, Ostrovich also played a Frantic Search and he discarded a Pandemonium into his graveyard. Ostrovich then tried to play an Intuition and Araixa had a Pyroblast again. Ostrovich searched an Intuition with a Merchant Scroll. Araixa played an Intuition at the end of Ostrovich's turn, Ostrovich played his Intuition in response. The Ostrovich's Intuition resolved and he took 3 Saproling Burst (one to his hand, the other two to his graveyard). Then Araixa's Intuition resolved and he took 3 Duress (one to his and, the other two to his graveyard). Araixa played Duress discarding the only Saproling Burst that Ostrovich had in his hand. They passed 3 turns without playing anything. Araixa then played a Frantic Search discarding a Saproling Burst. At the end of Ostrovich's turn, Araixa played an Intuition and he took 3 Replenish (one to his hand, the other two to his graveyard). During his turn, he played the Replenish. Ostrovich tried a desperate trick to save himself by playing a Force Spike (Araixa had two untapped lands), Araixa payed the mana, Ostrovich played another Force Spike and Araixa payed the mana again. The Replenish resolved; a Pandemonium and a Saproling Burst came into play. Match for Araixa. It was a short and not too complicated match. Both players showed their skill and played very well. 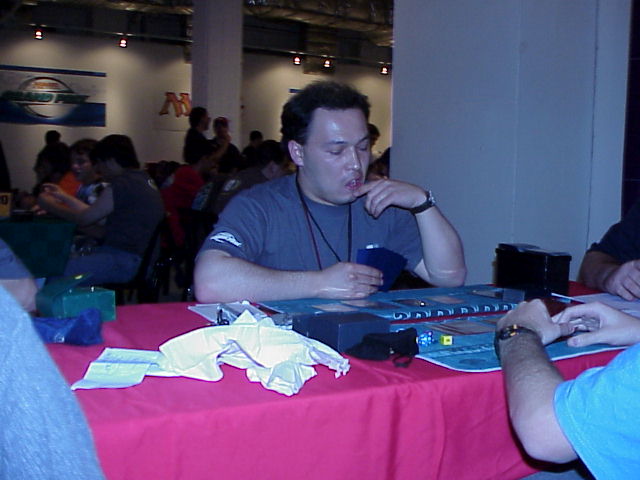