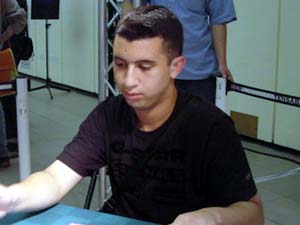 players have 13 points going into this round and don't need any introduction. Recently both players were in the top 8 of Pro Tour Amsterdam.

Farid starts off with a mulligan but still manages turn 2 and 3 Silver Knights. Olivier has a morph on his second turn thanks to Birds of Paradise. When Farid declares attackers Olivier tries to convince Farid that his morph is a Zombie Cuthroat. Farid doesn't buy it though and still attacks.

Things start to look bad for Farid as he stalls on 3 lands while Olivier develops his mana with 2 Solemn Simulacrums and unmorphs a Bane of the Living (x=0) end of turn. Some turns later Farid still hasn't drawn his 4th land for the Wrath of God he's holding so on to game 2. 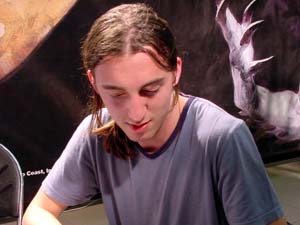 Game 2 Farid started with a turn 2 Talisman although he's holding a pair of Silver Knights as well. His plan is to first play a Wrath of God to clear Olivier's board and then play the Knights. He gets punished for that as Olivier plays a turn 3 Persecute naming white. This removes Farid's entire hand except for an Island. As if this wasn't enough Olivier drew 5 cards 2 turns later with double Skullclamp and a Solemn Simulacrum. Down in lands, creatures and with no cards in hand Farid is forced to concede to his fellow countryman and friend.