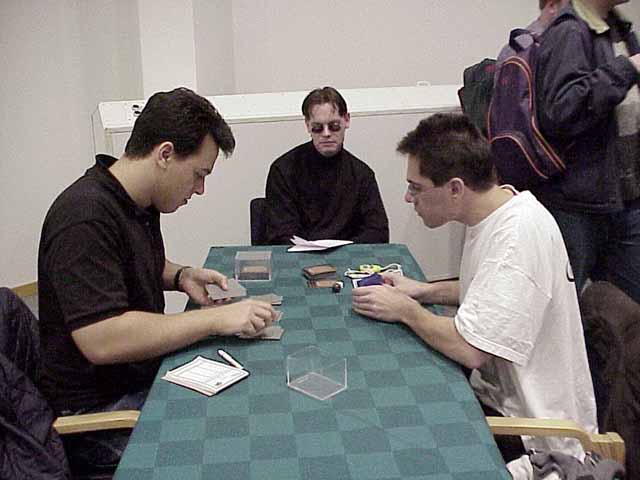 Round 6 saw one of the few Americans to brave the journey over to wintry Helsinki, Justin Gary, play Frederic Courtois of France. Justin Gary was the US champion in '97 and has high Pro Tour finishes to his credit. Courtois has attended 4 Pro Tours and picked up money at some. Both had built aggressive decks using black, red and in Courtois' case mainly blue cards.

Game 2 Gary decides not to let the Frenchman go first. This time Courtois doesn't get such a flier and it quickly becomes apparent he's struggling for black mana. Meanwhile Gary makes the cheating Blazing Spectre. In for 2, goodbye Spite/Malice. In for 2, chuck away an island. In for 2, lose another card. Courtois gets his swamp, but the best he can manage is to cast Cursed Flesh on a Battleflies. When Gary curses his only blocker, a Vodalian Serpent without kicker, it's time to move onto game 3.

The decider and Gary unfortunately gets off to a bad start by mulliganing down to 5. Courtois makes a Vodalian Zombie and bizarrely on turn 3 he casts a Vodalian Merchant, discards a swamp and then forgets lay his third land. Thinking he's been let off Gary goes on the offensive with Viashino Grappler and a Hate Weaver. An Attendant doesn't get to join the party as Courtois terminates it with Malice. Gary makes a Reaper and recovers the Attendant only for Courtois to block up the ground war with a massive 6/6 Vodalian Serpent. Gary can do nothing about it and has no fliers to block the Fairie Squadron that keeps coming in for 3 a turn. The fairies soon bash way his life down and Courtois finishes him off with a Soul Burn.