Folks, believe me when I tell you that we couldn't have planned this better. The two subjects of our day one Deck Tech features squared off for a feature match during round six. These two competitors were both undefeated, Gary having gone 4-0 and Rob 2-0 counting their byes. The tone of the match was very cordial, and both players started shuffling to begin. 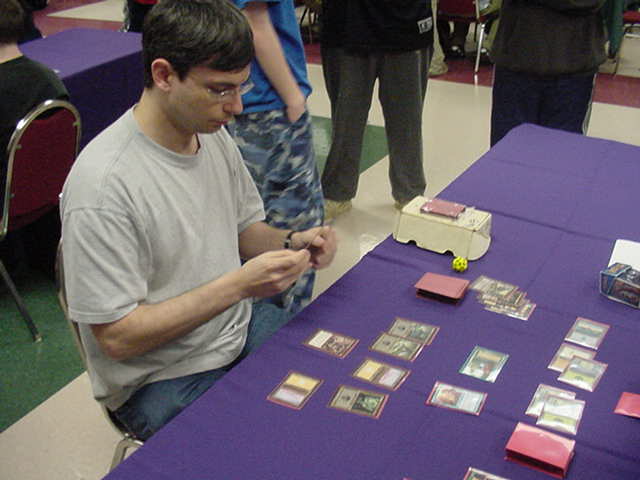 Gary: I haven't won a die roll yet. I've only gotten to go first once, one game I lost.
Rob: (Turns to me) I have to get him to win the die roll!
Gary: It seems that the two might be linked.

Gary rolled a two, which prompted Rob to mock-consider a concession on the spot. Instead, Rob turned up a four on the die (or, as he put it, "dammit!"), and chose to go first. Dougherty then began shuffling Gary's deck, while Gary was content to let Rob's deck stand.

Rob: You have to shuffle my deck. Technically it's a rule, and I don't want to get you in trouble.
Gary: Ok. I remember once at World's I made Darwin (Kastle) shuffle my deck, and he didn't like it. He doesn't like shuffling decks. But I trust you.
Me: So what's that say about Darwin?

Rob lead with a Forest, but failed to commence with one of his mana creatures. Gary began casting spells early and furiously, hitting a Squirrel Nest with a turn one Duress, killing a turn two Wild Mongrel with an Innocent Blood, and destroying a 3rd turn Bird of Paradise with his Death Grasp. Rob could only watch idly as Gary further stripped his hand of two cards via Gerrard's Verdict, and then watched as an Ensnaring Bridge hit the board, successfully holding at bay an end-of-turn Beast Attack (Gary's hand contained a scant two cards). 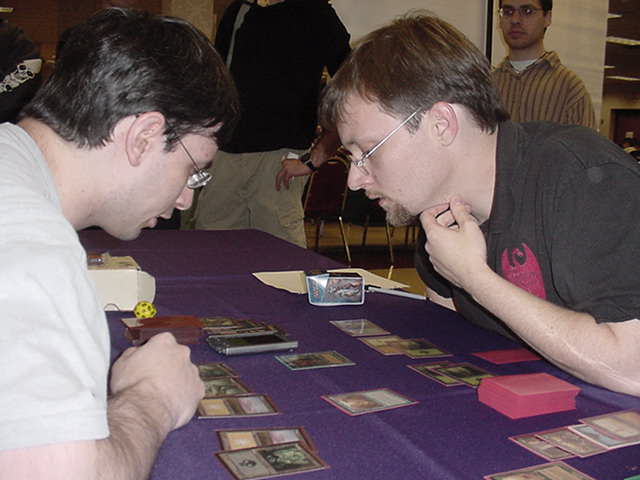 The game looked to shift momentum as Rob drew and played an Opposition. Both players called a judge to see if the Bridge still worked while tapped (it does). Satisfied with the answer, Rob passed the turn to Gary and tapped the Canadian's sole source of white mana. Fortunately, Gary had a Tainted Field in hand, and calmly Vindicated the offending enchantment.

The game quickly spiraled out of control for Rob. Although he started amassing a large army, Gary made a Disrupting Scepter which ensured that the Boston native would never have cards in hand. Rob managed to reach a board position where he was producing five squirrels a turn between his Nests and Temples, he failed to draw one of the remaining Oppositions he needed in order to stay in the game.

Conversely, Gary had all the goods this game. A 10th turn Millstone hurried along Rob's deck thinning. Although he never drew a Haunting Echoes to instantly win, Gary managed to mill away the rest of Rob's enchantments, leaving many dozens of squirrels chattering at the edge of the Ensnaring Bridge as the game ended in a decking.

Each player sideboarded in silence. Rob looked for solutions and Gary happily sideboarded in his enchantment removal. Once the shuffling period began, they very nicely discussed their thoughts on the previous game, agreeing that it could have gone either way. This game Rob decided to draw first. Neither player came out that quickly, with the first play being Gary's turn two Addle. This revealed an Alter Reality (which Gary needed to read), a Fact or Fiction, a Roar of the Wurm, a Beast Attack, 2 lands, and the Wild Mongrel Krakower made Dougherty discard. Rob summoned forth a third turn Llanowar Elves. It met a the horrible fate of Innocent Blood (Rob: But he's innocent!), but the Your Move Games player quickly rebounded with a Fact or Fiction for Birds of Paradise and two lands (putting a Disrupt and Call of the Herd in the Graveyard), followed by making a Squirrel Nest on a Forest. Gary quickly Ray of Distortioned the Nest, and followed it with a massively devastating Haunting Echoes. Although Rob tried not to appear visibly shaken, he lost almost all copies of Wild Mongrel, Call of the Herd, Fact or Fiction, Squirrel Nest, Llanowar Elves and Disrupt from his deck. This left him with very few ways to win in his deck. 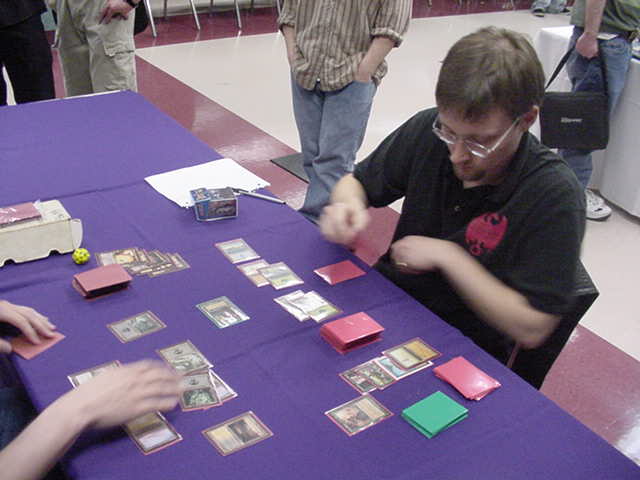 "This squirrel wishes to make you pay!", Rob cried out, attacking with the sole survivor of this one sided massacre. The rodent enjoyed the company of a freshly cast Compost and Birds of Paradise, hoping to make a comeback. Although Gary played a Bridge, Rob cast the sole remaining Fact or Fiction in his deck (he had been holding it at the time of the Echoes), netting the sole Upheaval in his deck along with a Bird of Paradise. Untapping, Rob dropped his second bird and an 8th land, setting up for a game-ending Upheaval the next turn (he would be able to play Upheaval, flash Roar of the Wurm back, and cast back a Birds of Paradise with this play), but it was not to be. Like a pro, Gary ripped Duress off the top of his deck, and didn't even bring it up to his empty hand before tapping a Swamp to wreck Rob's dreams.

Although Rob still could technically come back with a large force of creatures and an Opposition, Gary pretty much sealed the match with the Duress. A Millstone three turns later was basically a formality in sealing up the match.

4 Spellbane Centaur 4 Call of the Herd

1 Wrath of God 2 Ray of Distortion