"How's your deck?" Nelson casually asked as Kai Budde sat down to the table.

"Ehh, maybe six out of ten," the Hall of Famer shrugged in response.

Both players in this feature match have impressive histories. Brad Nelson burst on to the scene at Pro Tour Honolulu in 2009 with a 9th place finish after honing his skills on Magic Online. The inaugural MOL grinder, Nelson impressed the Magic world with his incredibly proficient technical play, as well as an experience that belied his short tenure on the Pro Tour. Last year at Magic Weekend Paris, Nelson got the feather in his cap, as his amazing season was rewarded with a victory over France's Guillaume Matignon in the Player of the Year playoff.

Budde, on the other hand, has probably had more words written about him than any player not named Jon Finkel or Brian Kibler. Other than Jon Finkel, no player has ever been as dominant or as unbeatable as the man nicknamed the German Juggernaut. Despite retiring from the game for work, Budde has still popped up at the occasional event, taking advantage of his Hall of Fame status, not to say that he wouldn't be qualified by other means if he needed to be. I mean, the man won seven Pro Tours, seven Grand Prix, and was Player of the Year four times. Summed up: he is not bad at Magic. 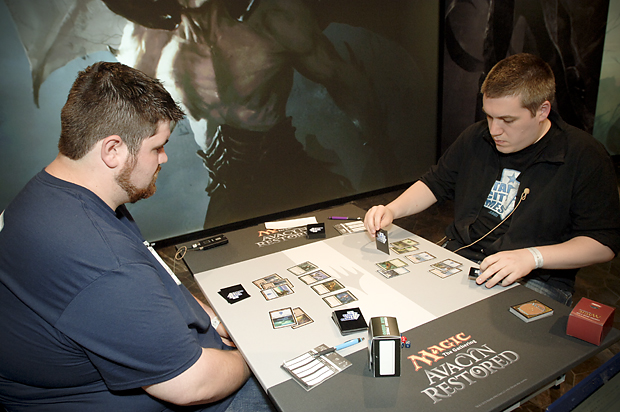 Nelson opened with a Swamp, to which Budde sighed and shook his head.

Nelson added the first creature to the board, playing a Crypt Creeper followed by a Butcher Ghoul. Budde, sitting on two Forests and an Island added a Tandem Lookout to his side of the board, though it lacked a soul mate. Nelson chose to attack solely with the Creeper on his next turn, leaving his Butcher Ghoul home. After dropping Budde to 16, he added an Undead Executioner to his side off a freshly-played Island. Budde brought some beef, joining his Lookout and a Flowering Lumberknot. When Nelson tapped out to play a Haunted Guardian and a Harvester of Souls, it became clear why he didn't needlessly attack with his Ghoul earlier. The Harvester would give him an incredible advantage in the turns to come, and Budde's Blue-Green deck would have trouble keeping it from getting out of hand.

Budde did a good job of delaying its impact on the board, using Vanishment to put it on the top of Nelson's library. He also began attacking with a Gryff Vanguard. When he added a Lunar Mystic to his team, Nelson went to work. Sacrificing his Executioner to a Bone Splinters, Nelson killed the Flowering Lumberknot and Vanguard on Budde's side, drawing himself three cards in the process. He added a couple more creatures to his side and began to attack. Budde was running thin on creatures and had to try and stay alive as best he could. He used Crippling Chill to stop the Harvester for a couple of turns, using his Mystic to draw into an extra card. Unfortunately, it wasn't anywhere near enough. With the Harvester out, Nelson had no reason to avoid overextending, and he came out ahead on cards every time a creature died in combat. Budde was in no shape to fight that and conceded within two turns, facing down seven creatures from Nelson: one for each life point he had left. 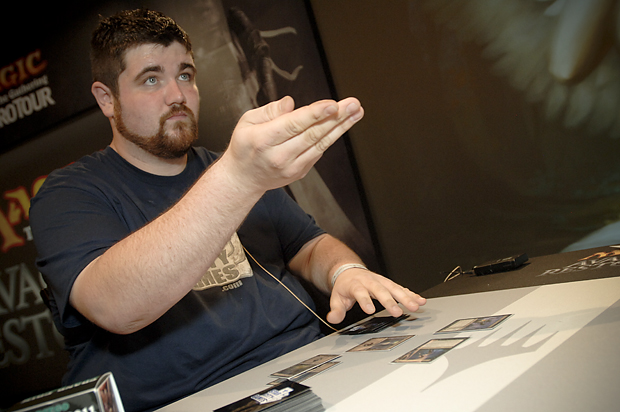 Nelson havests some cards and a win, giving him a leg up in his match against his Hall of Fame opponent.

Budde's beginning was a bit better paced than his previous attempt. He landed an Alchemist's Apprentice and Fettergeist on his opening turns, matched by only a Butcher Ghoul from Nelson. Opting to sacrifice his Apprentice at the end of Nelson's turn rather than pay for it, Budde's decision ended up leaving him without an available creature as Nelson use Crippling Chill to tie up the big flier. Budde just passed the turn with two Forests and Two Islands open. Without anything much to do after attacking, Nelson simply grew his Butcher Ghoul by throwing it at the Geist with a Bone Splinters. Budde untapped and played a Gryff Vanguard, passing the turn back to Nelson.

Nelson once again got a long sigh out of the German Juggernaut. His Homicidal Seclusion enhanced his Butcher Ghoul into a serious five-powered, lifelinking threat. Budde tried to close the difference in clocks with a second Vanguard, but for the moment Nelson was ahead. When Nelson added a Harvester of Souls to his side, things looked even glummer for Budde. Fortunately, the addition of a second creature turned off the Seclusion. Unfortunately, the creature that did so was the one that had beaten him in the previous game. Things got worse yet again when Nelson added a Corpse Traders, giving him a way to get himself back down to one creature, as well as draw some cards with the Harvester.

Budde wasn't without hope, though. He made a Flowering Lumberknot and enhanced it with a Druid's Familiar on the following turn, giving him a thirteen point attack. Nelson decided to chump block the Knot with his Traders. Just as things were swinging in Budde's favor, a haymaker swung it firmly back into Nelson's. Undead Executioners were played and immediately sacrificed for a Bone Splinters, killing both the Knot and the Familiar, drawing three cards in the process. Nelson attacked, dropping Budde to 5. Budde kept trucking, however, attacking Nelson down to nine with his two fliers before playing a third Gryff Vanguard. All of a sudden, Nelson was one attack away from dying! Despite the absolute glut of cards that he had been drawing, they were almost entirely lands. Even after a series of backbreaking plays from Nelson, he could do nothing to stop Budde's nine power of fliers and conceded after drawing his card. Even Budde was stunned as Nelson began to quietly scoop up his cards. 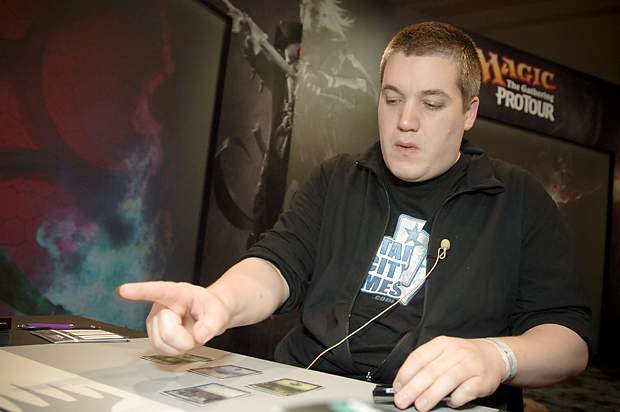 For the third game, Budde came out of the gates fast, with an Alchemist's Apprentice and a Scrapskin Drake, but Nelson's draw was faster, using a Vault of Endless Rest to power out a turn-four Gryff Vanguard. When Budde attacked with his two creatures on the following turn, Nelson bit the bluff and blocked the Apprentice, forcing Budde to sacrifice it for the card. After combat, Budde added a Flowering Lumberknot to his team and passed the turn, just setting up for a monster turn with a soulbond creature.

Nelson untapped, added an Evernight Shade to his team, and then passed the turn with both creatures untapped. Budde drew his card for the turn and then took a moment to clarify that Bone Splinters was a sorcery before making his Knot huge with a Druid's Familiar. The 7/7 smashed over, forcing Nelson to stick his undying Shade in the way. For his turn, Nelson added a potential way to deal with the Knot: a Searchlight Geist. Thanks to his Vault, he was able to cast the Geist and pass the turn with enough mana up to activate it should he need to.

Budde drew his card and then thought deeply about what to do. He was stuck on four lands (which hadn't appeared to really hinder him at this point), and was missing a second source of blue mana. With his head in his hands, he examined the board closely. After a decent amount of deliberation, he chose to send his whole team into the red zone. Nelson blocked with the Geist on the Knot, Shade on the Familiar, and Vanguard on the Drake. Confused, Budde looked at the blocks and wondered why Nelson was blocking a 4/4 with a 2/2 before realizing that when his soul mate died it would be reduced to a 2/2 and die with lethal damage on it from combat. Rather than let this happen, Budde used Joint Assault to keep his Familiar alive. With the board now relatively clear, Budde added an Alchemist's Apprentice and a Diregraf Escort to his side. When Nelson tapped for Barter in Blood, Budde just smiled and rolled his eyes.

Budde sacrificed all of his creatures to save his Familiar, which got big thanks to a Gryff Vanguard on the following turn. Nelson built up a little undying army with an Evernight Shade and a Butcher Ghoul, but they quickly became once-dead thanks to some massive swings from Budde. After adding a Tandem Lookout and a Galvanic Alchemist to his team, Budde looked ahead. Things changed slightly when Nelson untapped to add a Harvester of Souls to his team. For once, Budde was stuck, choosing to just pass the turn. He used Vanishment to bounce Nelson's Shade at the end of his turn, and he went to attack Nelson down to seven with his Gryff. When Nelson tried to stop it with a Crippling Chill, Budde stopped it with a Sheltering Word. Nelson replayed his Shade and passed the turn. For his turn, Budde played a second Gryff and curiously passed the turn. It seemed as though he thought the Shade was a flier and could stop his attacks.

For his part, Nelson sat stoically watching Budde as he passed the turns away. When Budde added a third Gryff on the following turn, he started to do some mental math. When he finally decided to swing in with his fliers, Nelson shook his hand.

"What were you playing around?" Nelson asked after the match?

"Wait..." Budde reached and picked up the Shade. "This thing isn't a flier?! I'm so bad," Budde laughed incredulously. "Is this card even that good?"

"Meh, it's not great, but it isn't bad," Nelson admitted.

"Everyone told me it was insane, so I thought it had to have flying. Otherwise, it's just not that great. Oh well, this is only my third draft. I've spent most of my time on Constructed, so I don't know all the cards, I suppose."

Both players got a good laugh after the match, the ever-jolly Nelson finding a way to laugh even in defeat. And besides, if he had to lose to anyone, at least it was to Budde.