Round 6 Feature Match: I Did That With My Mind

McGee, one of the most physically unassuming players at U.S. Nationals, sat down across from the one and only Joe Black, who brought not only his love of Friggorid to the table, but his overpowering personality, top-notch game face and Legions of screaming fans. Osyp knew he would likely need at least one of the above to give him the edge … which one would be determined by the road hazard that is one Michael McGee. 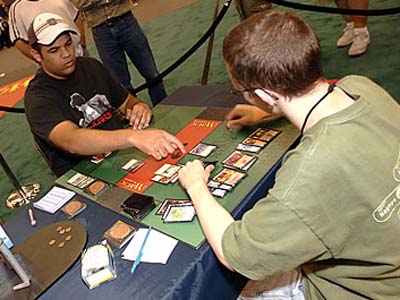 Osyp and Mike battled at top speed for most of the match.

Both players put li'l guys into play in order to gain early control, but the first actual damage was done by McGee when he dropped a perhaps overzealous Ogre Savant to return Osyp Lebedowicz's unkicked Shrieking Grotesque. This allowed his Torch Drake to swing in for a couple, and might have swung the tempo into his favor. To the uninitiated, this appeared to be the case. McGee added Mourning Thrull to further speed up the situation and shipped it back.

Osyp played Three Dreams for Galvanic Arc, Plumes of Peace and what may or may not have been Faith's Fetters, and took some beats from Drake and Thrull in order to win the long game. His hand was chock fulla more answers than Alex Trebek's stuntman, and at this point his pace of play was alarmingly quick.

McGee, aware of the answers in Mr. Black's grip, appeared to be trying to speed past the cards as if he could out race them, with a pace of play that was set by Osyp's cleverly implied "try and keep up with this," as if the time on the clock was more important than the actual game itself. .

McGee added Silkwing Scout and Osyp was suddenly facing down five points of love, though the eventual answers were safely in hand. He quickly Plumed the Drake and Arced it to kill the Scout, and at this point it looked like Osyp was willing to let McGee play directly into his hand. Though in fairness, what could he have done?

When your opponent shows you in advance that at least your next three turns are worth absolute nothing, The Vulcan Mind Meld can take a stranglehold, not only on your present game, but your future as well. Osyp followed up with a quick Helium Squirter and parity was quickly (over) achieved.

McGee, down to one card in hand and virtually no offense (now or for the foreseeable future), could only helplessly ship it back to Sir Joseph Newton Black. Osyp dropped his own Savant, which was much more timely than McGee's, and returned Thrull - gaining a +1/+1 counter from the Squirter for his trouble. 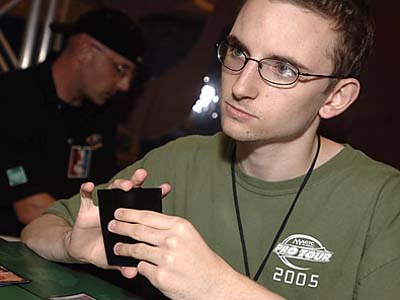 Ragamuffyn showed his face, but before he could nab some much-needed cards for McGee, it got its Faith Fettered. McGee scooped 'em up in the face of such sheer brutality, as Osyp took care of business like he was Bachman and Turner on overdrive.

Both players dropped land like they were waiting to buy a hotel on Boardwalk, then Ragamuffyn and Grotesque trade beats. When the newest and Raggedy Wuv Muffin was suited up with Necromancer's Magemark, things started to look ugly for Osyp…until he dropped Absolver Thrull to end that absolute nonsense.

Nonplussed and unperturbed, but probably with a touch of both, McGee threw down the Infiltrator's Magemark, which got one single hit before Osyp "The Answer Man and Mental Gymnast For The People" threw an Ogre Savant up in here.

Muffy and Minister of Impediments came down, but Osyp's force appeared to be a little too hearty and salty and downright ready to rush the red zone: McGee sacrificed Muffin in order to, well, not die real quick-like.

Again McGee was low on cards, due to Osyp's masterful use of both speed and aggression, and he needed to top deck something fierce, but Roofstalker Wight was the best he could find. 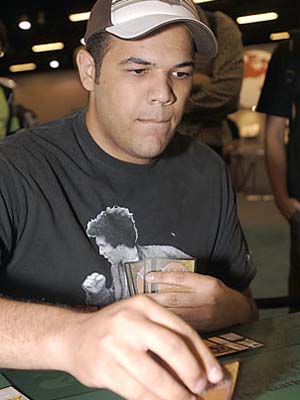 A timely (as if Osyp could play it any other way) Seal of Fire left McGee with a lonely Wight to try to deal with what might have been 12 Angry Men across the table, and he turned men sideways. The Minister dropped again next turn and was joined by Rakdos Ickspitter, who for all the world, seemed a day late and a dollar short.

But Osyp, still with a bunch of cards, pushed his advantage, ready to throw away some of his abundant supply of creatures in order to do in the dwindling McGee, who did what he could to stem the tide. Again, Osyp's seemingly overt subtlety of semi-contained bloodshed led to bad times for McGee: Repeal sent Icky back to the hand, girlfriend, and before he could take a dozen hits to the teeth like he was Leon Spinks and what difference would it make, McGee scooped up his cards and offered the hand.

This victory appears to have been due less to Osyp's cards and much more to his accelerated and aggressive style of play, which appeared to be at least highly freakin' uncomfortable for McGee throughout the match.

Facing a known entity such as Mr. Joseph Black, Esq., may be intimidating enough, but when he uses The Force to "strongly suggest" that you play at his reckless-but-not-really pace, and you can't find a way to get back to your own game, your cards are likely to disappear as fast as your life total.

With a masterful performance that demonstrated both the power and flaws of the human condition, Osyp The Entrancer earned himself a 2-0 match win and goes to 4-2, which kept his hopes to represent the U.S. of A alive and well.