Round 6 Feature Match: Illuminati vs. JBL

Zvi built up his defense right from the start, with Patrol Hound and Hypochondria. Phantom Nomad made things even better, and Berkowitz only had two gray ogres out as defense. They swung back and forth for four damage total, and Berkowitz brought out a strong defender in Dreamwinder. Zvi summoned a second Phantom Nomad and ended his turn, content to halt Berkowitz's attack. Frightcrawler was able to get through Zvi's defenses a bit, and was joined by Zombie Assassin. Zvi brought out Dwarven Driller, which is either great, horrible or underrated depending on who you talk to. Berkowitz took the first game. 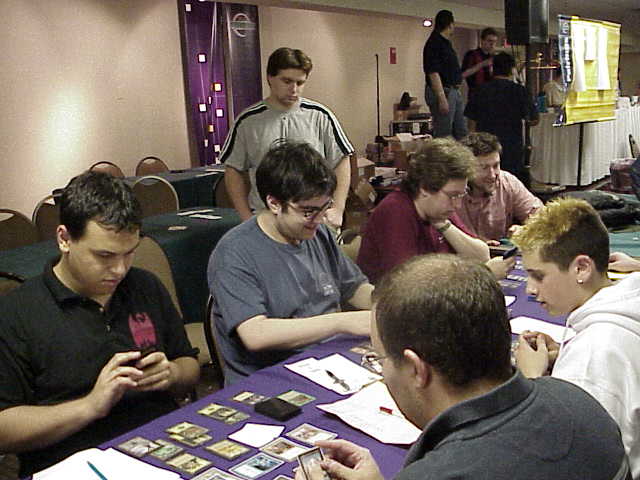 Landis opened against Gary with Stern Judge and Militant Monk, while Gary cast Chatter of the Squirrel twice, followed by Rabid Elephant. Landis' board became more impressive, as he brought out Teroh's Faithful, Cephalid Inkshrouder and Mystic Zealot. Prismatic Strands stopped a Morbid Hunger's attempt at removal, and Kirtar's Desire nullified the Elephant. Landis' defense locked up the board, and he easily took the first game.

Meanwhile, Bridy had Jeska, Warrior Adept and an Elephant token beating down Shvartsman. Wormfang Turtle held down the fort for Shvartsman, Kirtar's Desire slowed down Jeska's attack, and Flame Burst burned away Shvartsman's Puppeteer. Bridy's Barbarian Bully got Lost in Thought, while Shvartsman summoned Thought Eater. Bridy was able to pound through for the win.

Alex- "I wish I had drawn more land"
Pikula- "What? Who makes an excuse like that?"
Alex- "Maybe you should have been watching the game from the start instead of making comments like a jackass"
Pikula- "I saw you, you went land, land land..."

Pikula then walked away and talked a bit with Dave Price.

Zvi started his second game with Patchwork Gnomes, Militant Monk and Phantom Nomad. Berkowitz summoned Dreamwinder, and Zvi enchanted the Gnomes with Crackling Club, which allowed him to kill off Berkowitz's blocker. Zvi then summoned yet another Phantom Nomad, which got a few groans and complaints out of Berkowitz. Morgue Theft brought back the Dreamwinder, Shelter saved the blocked creature, and Berkowitz scooped.

Gary started off the next game with a turn two Werebear, which was enchanted with Coral Net. It stayed alive for a while, and Landis summoned Mystic Zealot. It went to the air thanks to Ghostly Wings, and Teroh's Faithful hit the ground. Gary made his army a bit bigger with another Werebear, Krosan Avenger and Gravedigger to bring back the dead Werebear. He attacked with his whole team, and the Avenger fell to the Faithful. Faceless Butcher was summoned, and the Zealot was bounced in response, which took out the Faithful. Landis summoned a Looter on his turn, while Gary built up his army even further. A second Butcher gave Gary even more of an advantage.

Shvartsman started off his second game with Pilgrim of Justice to Bridy's four mountains and Anger. Puppeteer made Alex's side a bit more impressive, and Bridy was obviously looking for a forest. Eventually he did find one, and Rabid Elephant and Jeska followed. Aven Flock gave Shvartsman some defense, and Deep Analysis provided a little card advantage. Peek revealed that the only card in Bridy's hand was Rites of Initiation.

Zvi built up defense in game three with Hallowed Healer and Militant Monk, while Berkowitz had Gravedigger and Organ Grinder. Shower of Coals cleared away Berkowitz's creatures, but he came back strong with Skywing Aven and Faceless Butcher. The Butcher died to Fierey Temper. Anarchist brought back Shower of Coals, which got a huge groan out of Berkowitz. This gave Zvi the match, and put Illuminati up 1-0.

Gary- "Most of the time when Zvi wins it's like 'What the hell just happened there?' They get beaten by clearly inferior cards."

Landis had a Stern Judge, and played Chainmail on it. Gary swung with his team and the huge Judge blocked a Butcher, so Gary cast Sudden Strength. Gary pitched two cards to Fledgling Imp to get threshold, and Landis used Embolden to stop some of the damage. Still, the board was too much to handle, and Gary took the second game. 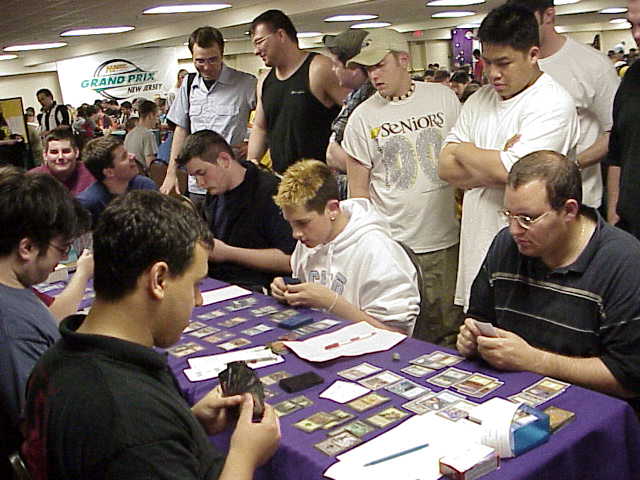 Wormfang Turtle held down the ground even more for Shvartsman, and was followed by a huge Breakthrough. Wormfang Drake and Aven Windreader came out soon after. Bridy busted through with an attack, and Shvartsman lost both of them, and was left with Aven Flock. However, he untapped and summoned Mystic Zealot and Vigilant Sentry, and had threshold. Bridy scooped soon after.

Gary mulliganed down to four, yet he put up a fight. His Nantuko Calmer held down the ground, and Faceless Butcher removed Angelic Wall. Thought Eater left Landis with no cards in hand.

Berkowitz- "He mulliganed to four? How are you losing?"

Morbid Hunger and Gary's offense was rendered a bit weaker thanks to Prismatic Strands and Embolden. Landis seemed to be winning until Gary cast Caustic Tar.

Bridy had a strong start with turn three Ember Beast, turn four Hell-Bent Raider. Shvartsman used Aether Burst to bounce back the Raider, untapped, and summoned Dreamwinder. Bridy summoned Mad Dog, and Shvartsman halted the Beast with Kirtar's Desire, and followed with Wormfang Drake. The Dog charged into the Turtle, and Firebolt finished the job. Chatter of the Squirrel gave Bridy two dorks, while Shvartsman built up the board with Teroh's Faithful, and his hand with Deep Analysis. Thermal Blast took down Dreamwinder and Psionic Gift enchanted the Faithful, making a bad situation even worse for Bridy. An attack, Flame Burst and Crackling Club took it down. Breakthrough put Shvartsman ahead even further. Hell-Bent Raider hit the ground running, and brought him down to 21 life points. Wormfang Drake followed, and Bridy summoned Nantuko Disciple. Simplify took out Kirtar's Desire, allowing Ember Beast to attack. Barbarian Bully was Syncopated, and Shvartsman was able to attack for lethal damage for the win. This gave Illuminati the match.

Gary seemed to have the game within his grasp thanks to a flashed back Morbid Hunger, but Landis topdecked a Zealot. That game ended in a draw, but Illuminati took the match 2-0-1.

2 Zombie Assassin 1 Waste Away 1 Screams of the Damned