Janosch Kühn is one of many solid German players. He has two World Championship top 8’s to his credit, one in 1997 the other in 2000. His opponent Fredrick Boberg has travelled down from Sweden and is already qualified for PT Houston. Both are on four wins and a draw.

Kühn is playing a black-blue Braids deck while Boberg is running a Mirari’s Wake deck with Living Wish.

Kühn won the die roll and chose to go first. He kept his opening hand and after some thought Boberg did likewise. Kühn got to see Boberg’s hand with a turn two Mesmeric Fiend and he took one of two Aether Burst. The other cards were Flash of Insight, Kirtar's Wrath and a Living Wish Boberg did not have a green source to cast.

Kühn summoned a Shadowmage Infiltrator and then the game started to go downhill very fast for the Swede. A second Fiend took out the other Aether Burst and Kühn followed that with a Nantuko Shade and then Braids to peg Boberg to four land.

A Rancid Earth provided the nail in the coffin. 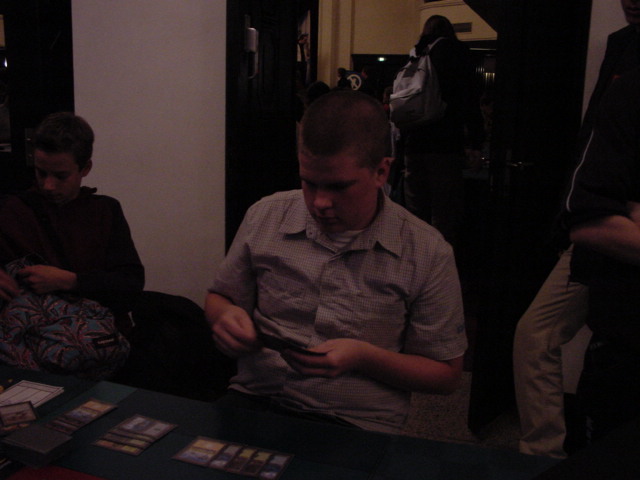 Boberg started game two with two Krosan Verge while Kühn came roaring out of the gates with a Nantuko Shade and Rancid Earth, although a Verge soon wiped out that deficit. The next turn Kühn attacked for three with the Shade and then sat on his remaining land to Syncopate any possible Wake.

Boberg didn’t fall for it and so next turn Kühn attacked for four and summoned an Infiltrator. Boberg didn’t have it as he passed the next turn as well. A Fiend revealed he wasn’t holding much: a couple of Aether Bursts, Moment's Peace, Syncopate and Crush of Wurms. Boberg used the Peace in response and flashed it back again the next turn.

The Swede finally found a threat as Living Wish went to fetch Major Teroh out of his sideboard. He held off casting it for a turn in order to be able to cast and sacrifice it in the same turn. That Syncopate Kühn was holding hadn’t gone away and although Boberg could afford to pay it would leave him with no mana lef t over to use his Aether Burst. At only seven life he had to let the Major go.

Aether Burst on the Shade bought a turn. It wasn’t getting any better though as a Skeletal Scrying hit another Fiend and enabled Kühn to take the Syncopate out of Boberg’s hand.

Crush of Wurms looked really fancy but didn’t really achieve much. All three together took down the Shade at the cost of one Wurm and an Edict reduced their number again while Kühn simply replaced the Shade with another from his hand. 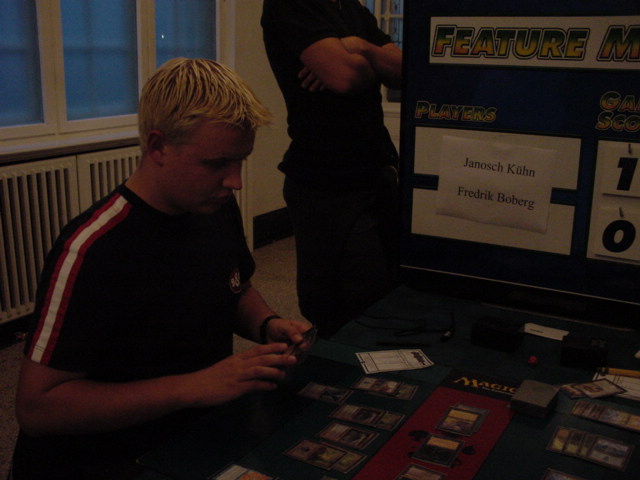 Quiet Speculation for Moment's Peace and then Bearscape looked like they might possibly provide an out for the Swede. Kühn was holding another Syncopate but Boberg managed to avoid losing to that as he used Bearscape to make two bears instead. One kept the Shade busy while the other mauled a Fiend to get his Aether Burst back. Only temporarily as Kühn fetched it straight back with a Gravedigger.

The Digger heroically dived in front of the one remaining wurm while Boberg was forced to flash back Peace to buy another turn. Kühn just kept turning up the heat. Another Infiltrator, Braids. All too much for the hapless Swede.