We have already met Jelger in the feature match coverage of this event. After drawing with Rob Dougherty in round four, he won his last match - putting him on four wins and a draw. Chad Ellis, one of the few North American players here this weekend is on the same record. He is a member of Team Your Move Games, and is rapidly becoming a regular face at international Magic events.

Jelger started in the first game, but the first play of the game was a Quirion Explorer by Chad. Jelger was stuck with three swamps in play, needing a Mountain to start casting spells, and Chad started the beatdown with a Nomadic Elf, and played a turn four Faerie Squadron with the aid of his Explorer.

Luckily for Jelger he drew a Mountain immediately, but his play of Firescreamer suggested that his hand wasn't that great anyway. The Firescreamer was Hobbled, and Chad's attack brought Jelger down to 13, with the American playing a Fires of Yavimaya after his attack phase.

The Dutchman desperately needed blockers, but he was stuck on four land and was only able to cast a Caldera Kavu, without even having enough mana to pump it up. Chad put an end to game one on his next turn, when he cast Hunting Drake to return the Kavu to the top of Jelger's library, the Dutchman conceded.

Jelger's opening draw looked a little better in game two, getting off to a quick start with a Shivan Zombie. Chad played a Galina's Knight on his second turn, and the creatures traded damage for a couple of turns, as they could not block each other.

Jelger had a Firescreamer on his fourth turn, which appeared to be quite a good card in his deck, but again it was Hobbled immediately. Wiegersma failed to draw a fifth land which would have allowed him to play Tahngarth, but he played it on his sixth turn, after casting Agonizing Demise in Chad's end step on a just-cast Faerie Squadron. 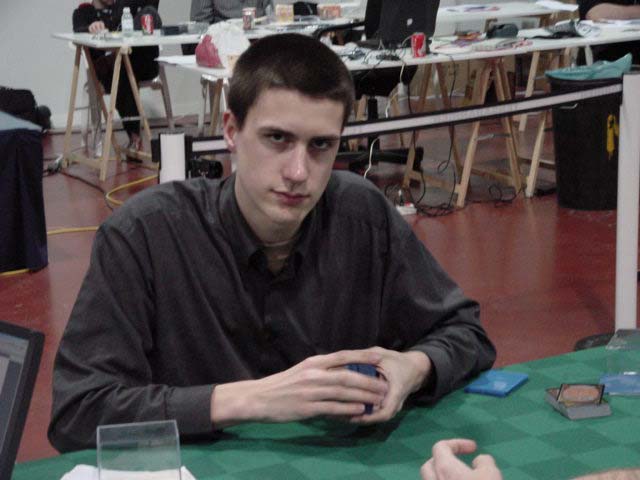 The Minotaur Hero couldn't get past the Galina's Knight, but it did mean that Chad had to be very selective about what creatures he played from then on. The Shivan Zombie continued to beat on Chad, who conceded on five lives when his Stone Kavu was destroyed by Slay. Chad had spent five turns searching for a creature that could survive Tahngarth's ability, only playing a creature when he could increase it's toughness to seven, to block and survive the Shivan Zombie and Tahngarth's ability.

Chad chose to go second in the third game, joking about how many answers his deck has to Tahngarth (in fact it has almost none, although he does have his own Tahngarth in his sideboard !)

Jelger had an amazingly fast draw in this game, while Chad was stuck on only one land and had to discard immediately on his second turn. Jelger meanwhile played a Shivan Zombie, a Hooded Kavu and a Vicious Kavu, reducing Chad to twelve after his fourth turn. Chad finally found a second land, but conceded when Jelger enchanted his Vicious Kavu with a Maniacal Rage.

Chad's draw was full of two casting cost spells - Nomadic Elf, Galina's Knight, Benalish Trapper, and so on, but he needed to draw either a Forest or an Island (which would have allowed him to cast Opt), but drew the land two turns too late in the face of a blistering draw by Jelger.