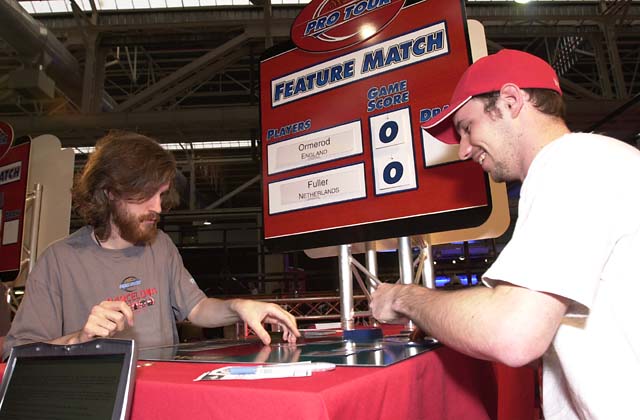 After some small talk and a few jokes about the so-called center of the Magic universe, Hampton Court Palace, both players went through the usual shuffling motions. Their decks were then taken away for deck checking. Mark Rosewater came in to turn the Feature Match into a trip down memory lane. These two players represent the two European Magic powerhouses: England (The Hampton Court centered team) and Netherlands (The ABU-Ruel connection). The players from these two groups are responsible for the decks that dominated the two last Constructed Pro Tours.

They traded stories from the Invasion Block Constructed testing, talked to Zvi about his upcoming Masters match up and discussed Feature Match philosophy with Mark Rosewater. This match is very important because while both players opened up with a 3-0 stint they found themselves at 3-2. The winner will earn the assured passport to the second day while the loser will have to win the last round.

Ormerod got of to an ironically called "fast start" with a second turn Thunderscape Familiar and third turn Caldera Kavu while Ryan played a Sparring Golem and an Alpha Kavu. John dropped a Kavu Runner and sent both Kavus in, trading his Caldera for the Alpha Kavu.

Ormerod tried to break the game apart with a Plague Spores targeting Fuller's lone Island and the Golem but Ryan had a Harrow to turn a potential mana screwing situation into a great answer.

Fuller: "I was so lucky right there."

He got two Plains and dropped a protection from Red Voice of All on the next turn. Ormerod came back with a kicked Bog Down that nailed Angelic Shield, Amphibious Kavu and Samite Elder after a long deliberation from the Dutch.

Ormerod: "That was pretty good!"

Despite having his army held back by the Voice of All, Ormerod still had some fighting in him, forcing Fuller to discard a Vodalian Serpent with an unkicked Hypnotic Cloud. The Dutch used his remaining card, a Harrow, to improve his mana base and then played a potentially untouchable Glimmering Angel.

John finally found a way around the Voice of All barrier with a Shivan Zombie. He now had to race the Angel to make up for the lost time. He kept dropping Red creatures, hoping to catch Fuller with an all-out attack. But the flashy end of the game was waiting in Fuller's hand: three, count them, three Gaea's Mights! The Angel and the Voice of All went into the Red Zone and the Angel quickly turned into 11/11 to finish the stunned Brit. 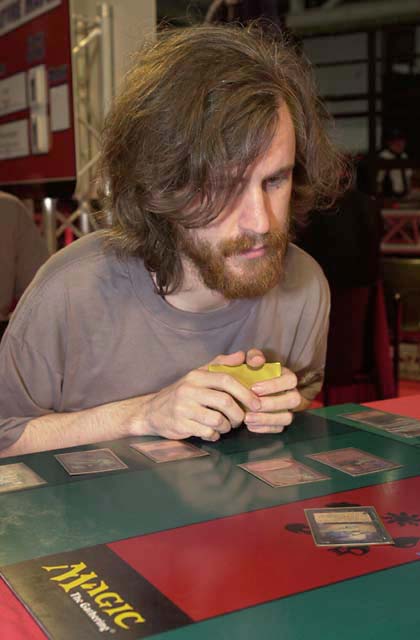 Fuller: "That is a head shaker."

As they shuffled for the second game Ryan talked about his three Gaea's Mights and it turns out he was forced to first pick one of them while John had to take a Phyrexian Bloodstock as his first Planeshift card. After a few moments, Ryan decided to mulligan his first hand. John came out flying with a Phyrexian Battleflies and Shivan Zombie in the first turn followed by a third turn Bog Down.

Fuller's first play was an Alpha Kavu that traded with the incoming Shivan Zombie. Ormerod played a second Bog Down to put Fuller into a very tough spot. He lost a Glimmering Angel, Treva, the Renewer and two lands to those two discard spells. Ormerod added a Caldera Kavu to the mix while Ryan used a Harrow to improve his mana and a Rushing River to buy some time.

He finally found another creature in the twisted shape of a Benalish Trapper. Ormerod Zapped the Fuller to get another card but still had to take a moment to build a battle plan. He buried the troublesome tapper under a Scorching Lava and kept the Battleflies in the Red Zone. He pick up the tempo with a Caldera Kavu and a Thunderscape Familiar.

The Dutch seemed to have finally found something to stop the ground pounders in the giant frame of a kicked Vodalian Serpent but another Thunderscape Familiar convinced Ryan Fuller to concede the game. His mulligan and the two Bog Downs pushed him into a hole he couldn't climb out fast enough to stop the incoming horde.

Ryan started with an Amphibious Kavu and John dropped a Thunderscape Familiar and a Viashino Grappler. They traded blows for a couple of turns while Fuller used a Harrow to stabilize his mana base and John played one of ever present Caldera Kavus. The Dutchman reached five mana and dropped a Kavu Climber and after a lot of mental debate decided not to attack with the Kavu.

A Plague Spores took out the Climber and Ryan's lone Island while the Caldera walked into the Amphibious leaving his two comrades alone. The table seemed to belong to John when he dropped a Shivan Zombie and second Familiar giving him four creatures while Ryan had none. Fuller used his second Harrow to find Blue mana once again and played Treva, the Renewer. That seemed like the perfect answer to Ormerod's growing pressure. The Brit, however, would have none of that nonsense and unmercifully nailed the legend with his second Plague Spores. 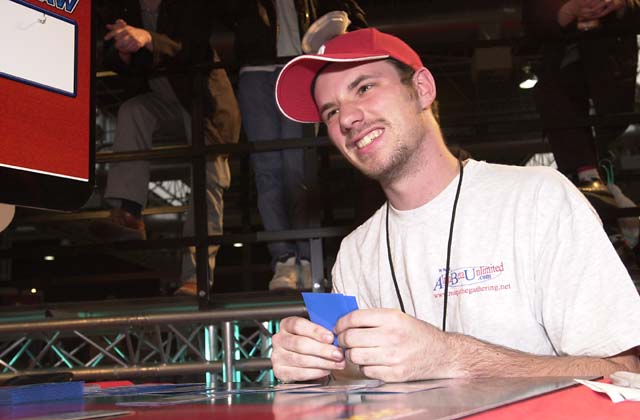 Facing a huge horde and with no blockers Ryan was forced to concede on the following turn when his draw phase gave him no effective answer.

Ryan: "There is nothing I can do about Plague Spores with this deck."

With the match over they could finally relax and discuss their drafting strategy and the last draft. Ryan still has a long night ahead. He needs to win the last round to make it into the second day and then he will play a grueling Go-Mar mirror match in the Masters.