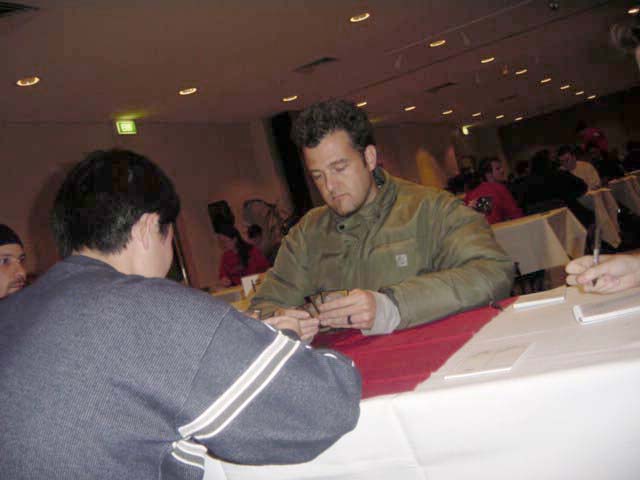 In the final round of the day, two well known and respected Australian players squared off to see which one of them would end up with a 5-1 record. The loser of the match would need to post at least a 4-1-1 record to make the top 8, and in the current Type 2 environment it's not a terrific position to be in.

After winning the coin flip Brebach decided to draw, despite Ou reminding him that he had drafted an aggressive deck during the Rochester and he began his game with a mulligan. Ou on the other hand stalled on 3 lands, but was still able to summon a Slimy Kavu and a Kavu Scout. Brebach found a better hand after his mulligan and played a turn 2 Quirion Dryad and Terminated Ou's Slimy Kavu when he saw he was stuck on 3 lands. He then followed this up with a Thunderscape Familiar and a Kavu Scout of his own, placing 2 more counters on his growing 4/4 Dryad. Ou finally drew another land but opted not to play anything on his turn. On the next turn when Brebach attacked with the two traded Kavu Scouts but Ou also was Agonizing Demised Brebach's Dryad, stopping his offence stone cold. Ou then seized the initiative by casting a Thornscape Familiar and a Duskwalker with kicker, to which Brebach responded in his own turn with a Cauldron Dance on his Dryad, which he replayed after his combat phase had ended.

Brebach then played a Caldera Kavu and an Ancient Kavu to begin rebuilding his Dryad, making it 3/3 but Ou had decided that it was time to begin the damage race. He sent his unblockable Duskwalker across the table taking Kim down to 11 life. The two then began dumping their hands with Brebach's Dryad growing bigger still via a Horned Kavu and a recast Thornscape Familiar, while on the other side Ou played a Quirion Trailblazer and a Volcano Imp. With his Duskwalker and Imp plus a few strategically placed chump blockers Ou managed to bring Brebach into range of his Soul Burn, ending the game with a 6 point burn. 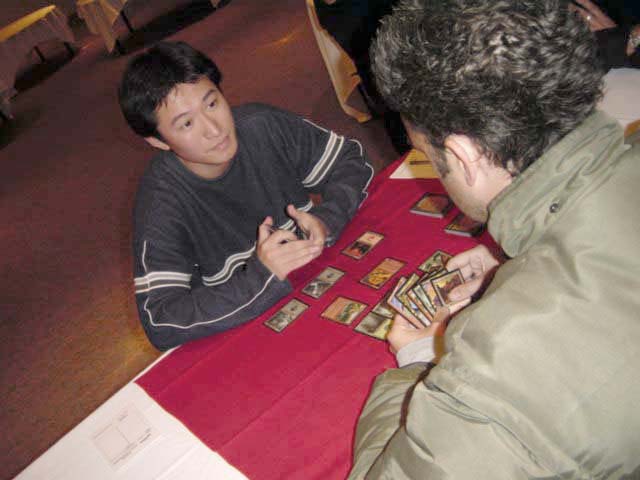 Brebach again chose to draw and started the game with a first turn Llanowar Elite, but Ou prevented it from attacking by dropping a Thunderscape Familiar. On his third turn Ou brought down a Volcano Imp and stabilized his mana with a 4th turn Quirion Trailblazer. Brebach summoned a Kavu Scout and when he sent it in to attack Ou double blocked it, losing his Familiar, but the real problem was the Trailblazer. It had allowed Ou to thaw out his fourth color-white, and with it he came an Armadillo Cloak on his Imp and set Brebach on a 4 turn clock to kill the Imp or die. Brebach was helpless as draw phase after draw phase yielded nothing but more land and creatures. Unable to kill the imp he conceded the turn before it would deal its fatal damage.