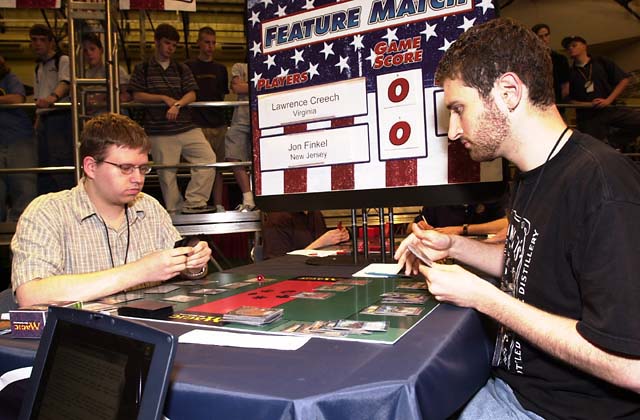 It was the matchup foretold in science fiction movies since still pictures were strung together to imitate motion: The Machine versus The Creature. Lawrence "The Creecher" Creech had somehow stumbled into a disaster of a draft deck, yet still managed to eke out a match win. His opponent, Finkel himself, had a pure five color special that was all gas. The Machine was cold as ice in his pre-game converstaion.

"You got anything to say about how bad my draft was? I want it in the coverage." - Lawrence Creech
"It was like rolling a die to see what card you picked." - Jon Finkel

It was dullsville until Creech missed his third turn land drop. Finkel kept his celebrations to a raised index finger and a Kavu Aggressor. Creech managed to peel a third plains and slap down a Disciple of Kangee. Finkel went one better and brought out Armadillo Cloak. Creech practically keeled over right there.

He fought back gamely with a Voice of All that got protection from red, but he was still due to take three a turn. The Disciple met a rather unfriendly Flametongue Kavu, and when he tried to take it to the skies with Dream Thrush, Finkel was ready with Zap.

Finkel sent both of his dudes into combat, and Creech's Voice tried to take down the Flametongue. Finkel used a Gaea's Might to save it. Creech fell to seven.

Suddenly, he rallied. His Hunting Drake dealt with the problem of the Cloak quite nicely. All Finkel could do was play Quirion Trailblazer to establish the full Domain. Creech used this window to bust out Sunscape Familiar and Silver Drake, returning his Hunting Drake to hand for further abuse.

Finkel tried to put a stop to that nonsense with a kicked Hypnotic Cloud. Creech laughed it off with Prohibit. Now The Creecher had the upper hand, sending in the air with his Silver Drake. Finkel refilled his hand with an Allied Strategies for the full five. Creech filled out his defenses with a kicked Prison Barricade. 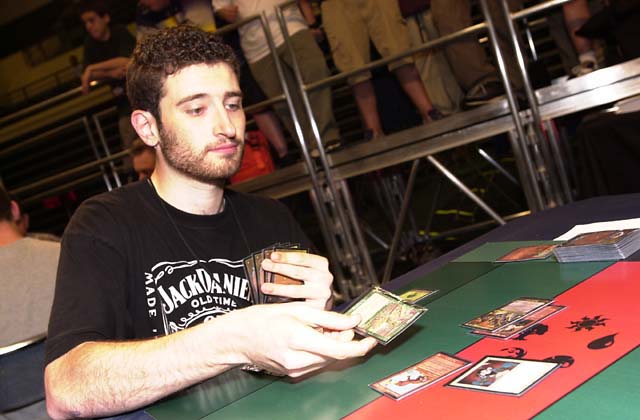 Finally Finkel got proactive. He summoned a Kavu Monarch and attacked with his Flametongue Kavu, now a trampler. Creech took a chance and blocked only with his Voice of All. Finkel played a second Gaea's Might, this time for the game.

The two made no chatter while shuffling up for the second game. As The Creecher announced his mulligan, Finkel reached up and gave himself another win on the scoreboard.

Creech blocked Finkel's Yavimaya Barbarian with his Sunscape Familiar, only to see it fall to Aggressive Urge. He replaced his fallen warrior with a kicked Prison Barricade, while Finkel generated a Kavu Aggressor, lacking a fourth land.

Finkel hit for five and passed the turn, again missing his land drop. Creech took the damage and returned fire in the air with his Angel. Finkel Trailblazed for an island and held his men in reserve. Creech took his Angel into battle again. Finkel attempted a Flametongue Kavu, but Creech denied him the pleasure with kicked Prohibit.

He tried to stymie Finkel further with a pro-red Voice of All, but Finkel's toolbox was wide open, and he fished out a Thornscape Battlemage. He swarmed Creech's front lines, and lost the Kavu Aggressor. Its death was avenged by Scorching Lava that took down the Barricade responsible. 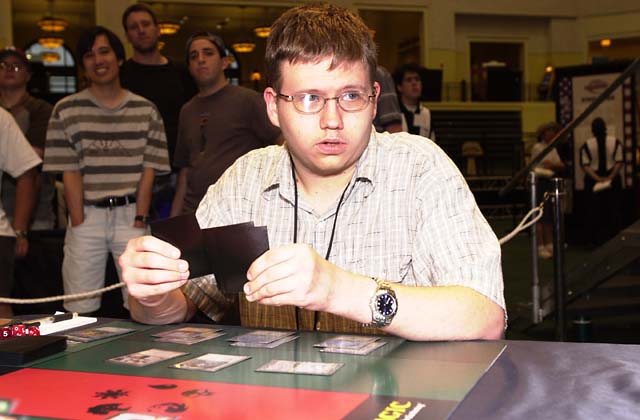 Creech tried to dig for answers with Sunscape Battlemage, but had to accept Finkel's assault. Finkel meanwhile Trailblazed for a plains and played Allied Strategies for four. Finally, he decided to put Creech out of his misery. He Cloaked up the Barbarian and went wacky on the Red Zone.

Creech did his darndest to fend off the reaper. He had Barrin's Unmaking to de-Cloak the Barbarian and trade it for his Battlemage, then used Repulse to save the Battlemage for another round. It brought him two more cards and was joined by an Obsidian Acolyte, but it didn't matter in the slightest. Finkel dropped another kicked Battlemage and replayed the Cloak. The endgame was academic. He didn't even need the Treva in his hand.