David Humphreys is coming off a momentum-building top 4 at Pro-Tour New Orleans where he started off 2-2-1. Today, however, he is starting with a strong 5-0 including 3 byes against Floridian Joe Crosby who had 2 byes. 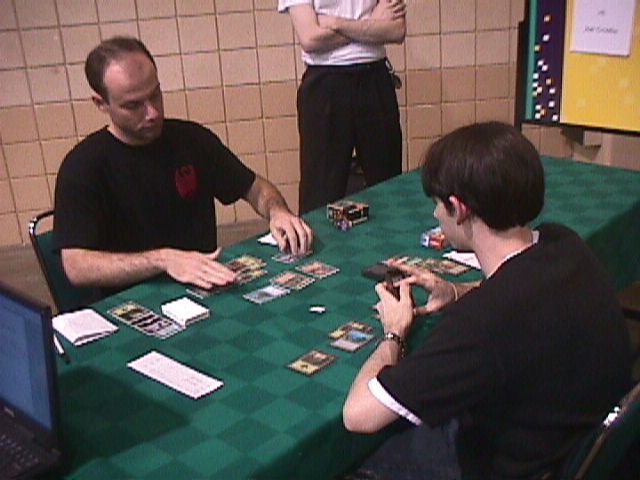 Joseph Crosby vs. David HumphreysJoe started off the first duel with two consecutive come-into-play tapped lands. On the other side of the board, David went straight for the throat with a second turn Wild Mongrel. Joe's response was to play with his lands some more by casting a Rites of Spring for two discarding two land to get two more. David didn't have any additional pressure to drop on his third turn, simply laying a Skycloud Egg and passing the turn.

Joe suspiciously ended his fourth turn without a play. David seemed to be concerned about attacking with his Mongrel, but he decided to play the odds and sent his superbear in regardless. His fears were answered when Joe showed the Elephant Ambush, prompting David to discard a Swamp and a Scrivener to keep it alive. David simply blew his egg to draw a card, played a Cephalid Broker and passed the turn.

Joe added to his flashback armada on the next turn with a main-phase Beast Attack. By the time Joe added a second token to the team, although, David dropped a Metamorphic Wurm that was ready to hit threshold at David's command through his Broker. Instead of settling in for a defensive stalemate, David sent his wurm in an effort to race his opponent, but the stalemate formed anyway when Joe refused to send his Beast tokens the next turn.

David finally decided to serve across with his wurm and newly-summoned Crashing Centaur. When Joe blocked the wurm with both tokens, a Ghastly Demise took out one, leaving the other one to the mercy of the wurm. With his two crucial creatures so easily dealt with, Joe had nothing else to put in David's path. 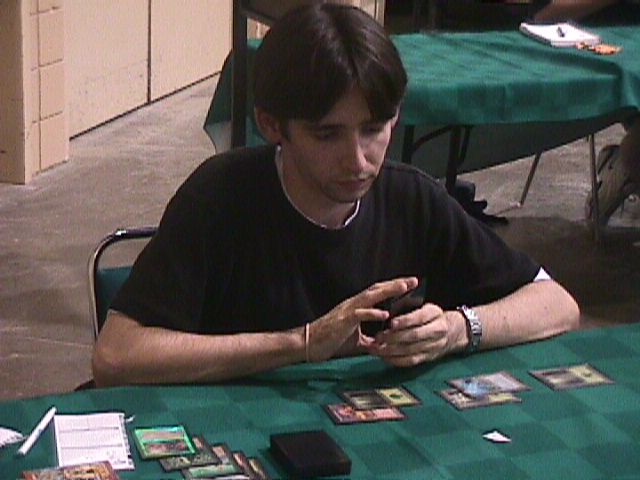 Joseph CrosbyJoe decided to draw first in game 2 and once again led out with two come-into-play tapped lands. David had summoned a second turn Crypt Creeper to start the beatdown but had no third-turn drop to speed up the process.

The tempo of the game turned around quickly when Joe cast Flame Burst killing the Crypt Keeper at the end of David's turn. Joe then followed up with a Cartographer on his turn and cast Reckless Charge on it, sending his Cartographer into battle immediately for 5. David cycled an Afflict on the creature and cast Careful Study on his next turn in search for both land and answers. David passed the turn and took yet another hit from the Cartographer. Joe committed another creature to the field, a Krosan Avenger, but it was taken down by a Ghastly Demise.

Unfortunately for David, Joe had lured him into using his last available removal spell, clearing the way for his Kamahl, Pit Fighter. As you may realize, the game ended in a very brutal and quick manner.

Crosby started the final game and came out first with a third-turn Krosan Avenger. The 3/1 creature was dispatched by an Afflict on David's next turn. Crosby answered with a Halberdier and a Krosan Archer which David met with his own Dirty Wererat and Wild Mongrel. 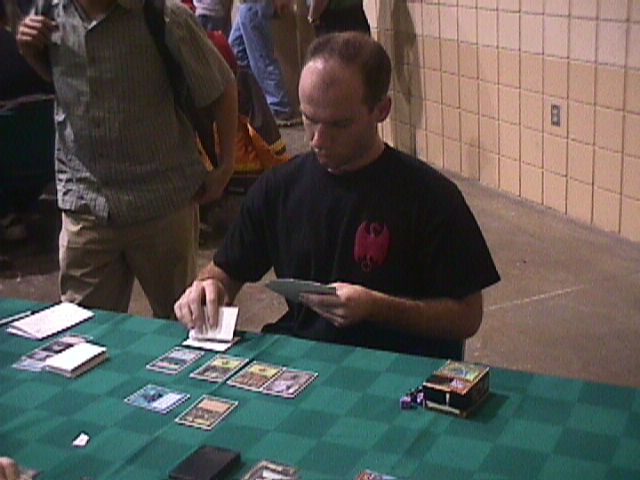 David HumphreysThe turning point in the game came when Joe sent his Halberdier and Krosan Archer into battle. The Halberdier was blocked by the Wild Mongrel. David decided to discard 2 to make his Mongrel a 4/4 versus the 3/1 first striking creature, but Joe had a Flame Burst and an Engulfing Flames, prompting David to discard two more, and then a third additional card to keep his Mongrel alive. Most of these cards were blue, except for a Crashing Centaur, and since David had not found an Island yet, this became a more bearable trade.

David had basically stopped Joe's attacks and, after topdecking a Werebear that was at threshold, he was in a very strong position to take the offensive for the first time in the game. At this point, Joe could only stare down the opposition with a pair of Krosan Archers and a Diligent Farmhand, probably hoping to find his Kamahl.

David sent his team into battle, trading his Werebear for a card out of Joe's hand via a block with both of his Krosan Archers, but the important part of this maneuver for David was that he had started the bleeding with his Dirty Wererat (David would admit later in the game that sending the 4/4 Werebear to its certain death was a mistake). David found a Ghastly Demise for one of Joe's archer; Joe met this with a second Flame Burst, killing the Wild Mongrel. David kept drawing more creatures while Joe only found a mix of more land and tricks that wouldn't make the cut. With time running out and little life left, Joe faltered against David's growing assault force.