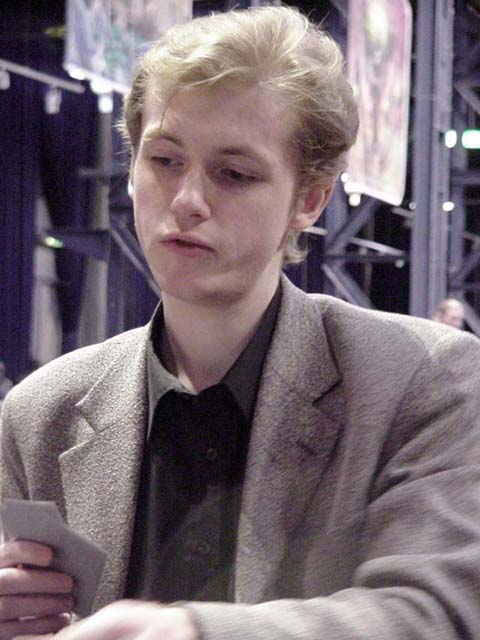 Undefeated after round five, both Kai Budde and Konstantin Firsov were both safe into the second day. With a perfect 7-0 record in line though, they faced each other in a battle between Russia and Germany. Both the two players had solid red, black and blue decks, and the two of them sat down to play a very quick and very tough match.

The first game was all about creatures and removal. Kai Budde got to start, and he played a second turn Ravenous Rats, stripping a Prohibit from Firsov's hand. Firsov played lands, then he cast a turn three Plague Spitter that killed the Rats and started doing damage to the two players. The Russian then summoned a Slimy Kavu, but Kai Agonizing Demised it and played Allied Strategies to fill up his hand.

Firsov attacked with his Spitter, and then he dropped a Shivan Zombie. Budde tried to disrupt his mana by using the red kicker of a Nightscape Battlemage to destroy his only mountain, but Firsov had another mountain and Terminated the Battlemage before sending his own creatures over.

The game continued with more creatures and more removal. Budde cast Magma Burst with kicker, killing Firsov's Plague Spitter and the Shivan Zombie. Then, Firsov tried to cast Tek, but it was Excluded. Budde summoned a Sea Snidd, but Firsov used a Plague Spores to kill the Snidd and Budde's only island. Budde played his Crypt Angel and got his Snidd back, then he cast Nightscape Apprentice - a good combo with the Angel. But Firsov had his own Magma Burst, and the Burst took care of the Angel and the Apprentice.

Firsov then played a Ravenous Rats, forcing Budde to discard a Dream Thrush. Budde then re-cast his Snidd, but it was Agonizing Demised. Budde played Zanam Djinn. Firsov attacked and then Sparked it. The Russian then cast Kavu Aggressor, and it actually got to attack and bring Budde down to four before it was Terminated.

But Firsov had yet another creature, a Goham Djinn, and as Budde ran out of steam, the first game went to the Russian player.

The second game brought more creature and removal action. Budde chose to have Firsov play first in the second game, and the Russian kept a hand with four lands, a Morgue Toad, a Nightscape Familiar and a Volcanic Imp. He got a pretty fast start, playing a second turn Nightscape Familiar and a third turn Morgue Toad. His Volcanic Imp was Excluded though, and then Budde played a Tower Drake. Needless to say though, Firsov had a removal spell, and he Sparked the Drake. Budde then played a Sea Snidd, and Firsov cast a Hunting Drake. 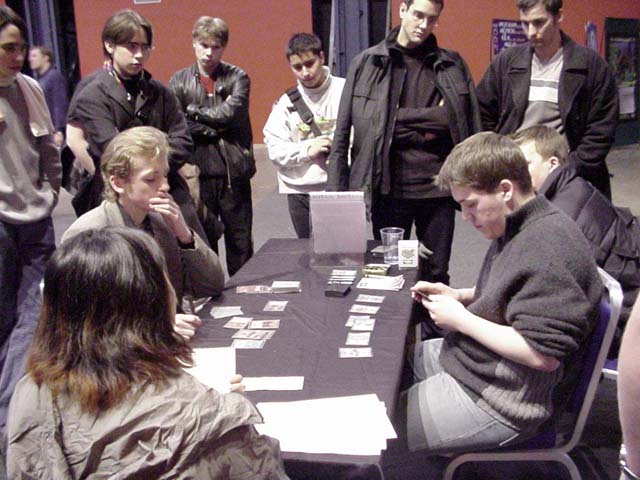 During his next turn, Firsov attacked with his Familiar, the Toad and the Drake. Budde blocked the Toad with his Snidd, but Firsov had a trick up his sleeve -he put damage on the stack, then he sacrificed the Toad to get mana to Zap the Snidd. Budde had a trick too though. He Repulsed the Hunting Drake, and then he cast Bog Down with kicker, emptying Firsov's hand.

Firsov still had a Nightscape Familiar in play though, and so he attacked, bringing Budde down to nine life. But Budde had more staying power. He cast Crypt Angel, retrieving the Sea Snidd from the Graveyard. The Angel went into Mourning, but the Snidd came into play along with a very dangerous Nightscape Apprentice, and soon Budde was fetching creatures from his graveyard with his Angel/Apprentice combo.

Meanwhile, Firsov got out a 4/2 flying, first-striking Tek. He also used his Stormscape Battlemage with kicker to kill the Sea Snidd, and the Tek attack brought Budde dangerously low on life. But the German simply refused to give in. He used the Angel to get back his Tower Drake, then he played Hypnotic Cloud to empty Firsov's hand before re-casting the Tower Drake. He also played a Vodalian Zombie, and then both players went into topdeck-mode.

Firsov had a little edge though as he had much more life than Budde, so he sent his Tek over for a visit, forcing Budde to chump with his Drake. Then, the German drew Scorching Lava, and suddenly, Tek found himself removed from the game. This changed everything. Budde used his Angel to get back the Drake yet again, he played a Zanam Djinn and the two huge flyers started eating up Firsov's life pretty quickly.

The Russian got out a Plague Spitter and a Hunting Drake, but the Spitter was Terminated before it could do much damage and finally Kai topdecked an Agonizing Demise that he played with kicker for the victory.

Konstantin let Kai play first in the third duel, but both players got really slow starts. The first creature of the game was Konstantin's third turn Kavu Aggressor, but Kai Excluded it. Kai then got out a Bloodstone Cameo, setting up for a fifth turn Zanam Djinn. At that time, Konstantin had played his Plague Spitter again, and the two players started taking damage from it.

Firsov's answer to the Djinn was to play his 4/2 flying, first-striking Tek, but Budde wasn't worried. First, he cast Bog Down with kicker, taking two swamps and a Hunting Drake from Firsov's hand. Then he played Flametongue Kavu and killed Tek before sending his Djinn over. 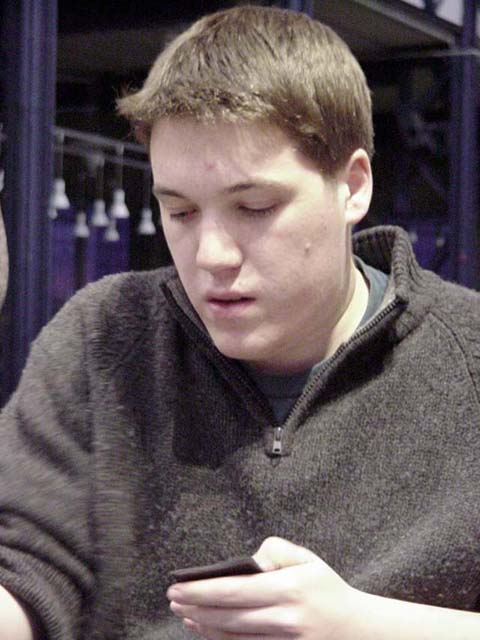 The Djinn died during Firsov's next upkeep after a Spark hit it in the head. Then, the Flametongue Kavu died when it got blocked by the Plague Spitter. Then, Konstantin got out a Duskwalker with kicker, and he started attacking.

Kai hadn't run out of steam yet, though. He had a Phyrexian Slayer and his Sea Snidd, and so he started attacking back. Firsov Zapped Kai to draw an extra card, and then he played a Morgue Toad, holding back his Duskwalker to block. But the German had a Terminate, and the Duskwalker died before it could block. Then, the Snidd and the Slayer took Firsov down to two life.

Desperately trying to survive, Firsov played a Hunting Drake, putting the Phyrexian Slayer on top of Budde's library. He then blocked the Snidd with the Toad, but then the Slayer was back along with a Shivan Zombie - and that was simply too much for him to handle.