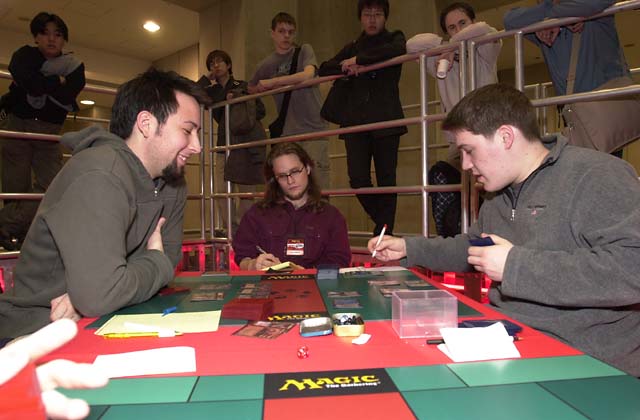 Before the match began, Mark Rosewater joked how this was the "Pro Tour Champions of B" matchup. Budde and Blackwell are both struggling to stay in contention for Day Two with very different decks. Budde was playing the deck developed by John Ormerod with the core of the European Alliance and Mogg Squad. The deck was one of the only true Aggro-Control decks at the tournament, running fast Blue and White creatures with counterspells and tempo in the form of Repulse. Trevor's deck was a fairly typical Black/Red control deck playing the full complement of eight "big burn" spells, with four of each Urza's Rage and Ghitu Fire.

The match started with Blackwell dropping a pair of Nightscape Familiars to hold off Budde's lone Galina's Knight. With no real game developments for several turns, things finally sprung to life with a Meddling Mage (stopping Void) hitting the table for a few turns before quickly being killed by Urza's Rage.

Blackwell was playing conservatively, holding back for fear of Absorbs and Excludes. Budde remained untapped for turn after turn, but he wasn't holding any countermagic, he was only holding land. Blackwell tested the waters with a Pyre Zombie, and followed up with a Blazing Specter. A few turns of the Specter whittled Budde's hand down a little bit, but he found a Fact or Fiction that in turn brought him to a few more spells. 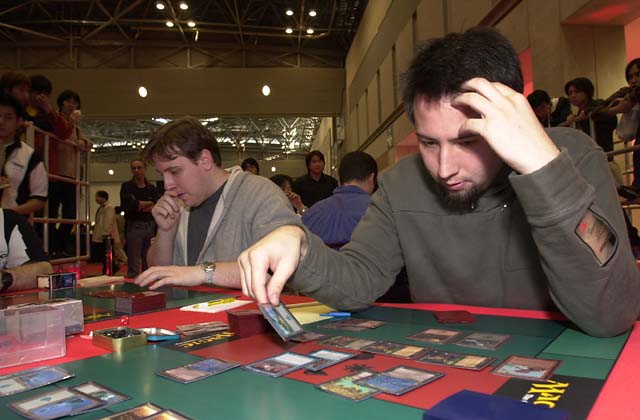 It was too late though. Skizzik joined Blackwell's forces, and Budde picked up his cards to go to the next game. Budde sided in Disrupts and Crusading Knights, while Blackwell brought in Shivan Zombie and Addle.

Game two was similarly unexciting for Budde. He lay several islands in the first turns, but failed to find a white mana or a fourth source for several Fact or Fictions in his hand. Blackwell dropped a Nightscape Familiar, and after having it first Repulsed and then Excluded, he waited for the big drop out of Budde's deck on the next turn.

Still failing to draw more land, Budde could only discard, and Blackwell started laying threats, beginning with another Familiar, but following it up with a Blazing Specter. Replaying the Specter after Budde plays yet another Repulse, he continued to swing in. 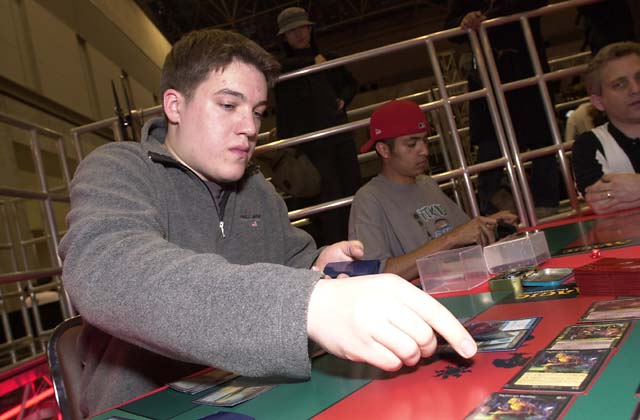 Budde's table had begun to develop finally. Crusading Knight and several two casting cost creatures were starting to prepare for an offense when Blackwell sent 8 points of damage straight to Budde's head, bringing him to 4. Budde's newly summoned Stormscape Apprentice would be able to hold off the Specter with his final white mana.

On Blackwell's next turn, Budde held off the Specter with the Apprentice, and with only two mana open, Budde couldn't stop the Pyre Zombie and Urza's Rage from Blackwell.