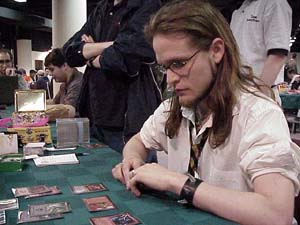 Kyle "the Big Ernham" Rose has won more money on the Pro Tour than anyone but Jon Finkel. The next time he finishes in the money at any event, he'll become the second person ever to crack the $100,000 mark. Adrian Sullivan was his opponent in a round 6 feature match and is one of the true characters on Tour. Known mostly for his innovative, some might say bizarre, deckbuilding; Sullivan also plays his cards upside down, lays his graveyard out at a right angle to the way most players do, and uses bizarre tokens for whatever purposes he needs tokens.

Rose, to the surprise of absolutely no one, ran an aggressive green/red/white deck while Sullivan had the stereotypical red/black/blue build. Rose burst out of the gates quickly in game 1 with a pair of Thornscape Familiars, but Sullivan Excluded a Verduran Emissary and used Hunting Kavu to slow Rose down even more. Rose held Flametonge Kavu in his hand - the most played card at Pro Tour Tokyo is even better in Limited - but he couldn't find a mountain. Sullivan sensed that Rose was struggling and so he immediately blasted a Nomadic Elf off the board before Rose got a chance to use it. Rose's Shackles had Sullivan's Callous Giant shut down, but Sullivan's Cinder Shade was a monster on defense and thus the board was stalemated. 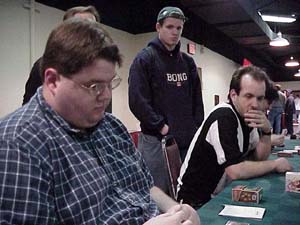 Rose broke the stalemate with Voice of All "red" and was able to start attacking again. Sullivan stopped him again, though, with a Reckless Spite that also nailed a Battery token. Sullivan's only probably was that the five life he payed for the Assault was a bit reckless as it dropped him to 5. Rose was down to just 9 life of his own, but he sent both his remaining creatures (Llanowar Knight and Thornscape Familiar) into the red zone. Sullivan thought and eventually decided he was willing to chump block one and go down to 3. Rose didn't have a fatal burn spell, but he did finally find a mountain for his Flametongue Kavu. Bye bye Mire Kavu. Sullivan had a Flametongue of his own (bye bye Llanowar Knight) and after all the smoke had cleared, the last remaining creature was Sullivan's Cinder Shade. Rose played Voracious Cobra and Sullivan, still on just 3 life, had no choice but to throw his Shade at it. With the board now clear of everything except a Shackled Callous Giant, Rose played the last threat out of his hand. And quite a threat it was! Thicket Elemental (with kicker) summoned Stone Kavu out of Rose's library to join it in the red zone. Sullivan drew one last card, had no way to deal with both threats, and conceded.

Both players dropped turn 2 Familiars in game 2 - Nightscape for Adrian and Thornscape for Kyle. Sullivan's familiar allowed him to play a turn 3 Slingshot Goblin and then use Confound to defend his familiar from an Assault, not to mention draw a card. Rose then decided to Shackles the familiar, but that didn't work out either because Sullivan had Lava Zombie ready to gate into play, unsummoning the familiar and sending Rose's Shackles to his graveyard. Undeterred, Rose smashed the zombie with his Flametongue Kavu. Sullivan had to use Crosis's Charm to kill that Flametongue. The monsters just kept pouring out of Rose's deck: Llanowar Knight, Pincer Spider, Glimmering Angel. Sullivan was on defense the whole time, trading creatures when possible and taking damage the rest of the time. Sullivan managed to Soul Burn away the Pincer Spider and he thought Mire Kavu would be able to block Llanowar Knight. However, after Sullivan declared it as a blocker, Rose Singed it. That not only dealt a lethal point of damage to the Kavu, but also turned it black so the pro-black Knight would survive combat. Sullivan knocked his deck, didn't draw a miracle, and stuck out his hand to congratulate Rose on a feature match victory.