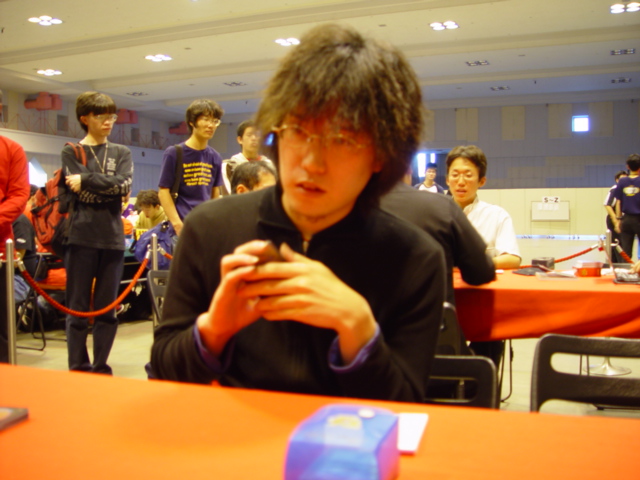 Masaei Miyamori may look like he just picked up the cards, but don't let that fool you. The thirteen year-old wunderkind has been tearing up Japanese tournaments for over a year. He's second on Hobby Japan's Junior (15-and-under) rankings list, just behind Shinsuke Hayashi. Today he's already at 4-1, and making a run at Day 2. His opponent this round is the always-stoic Kentaro Yuasa, whose pace of play verges on impercebtible.

Miyamori started with an inauspicious mulligan. His Disciple of Grace was met by a Battlefield Medic, and then he had no third-turn play. Always a bad sign. His fourth turn he spent playing Explosive Vegetation, while Yuasa's mystery monster was free to smash. Yuasa added a Severed Legion to his team and passed it back to Miyamori. He made a Daunting Defender, but things were not looking good for him.

The Legion struck. Yuasa made yet another morphed creature. Miyamori answered with Dive Bomber. A Doomed Necromancer from Yuasa strengthened his defenses. Miyamori decided that his flyer was his best bet, and enchanted it with Improvised Armor. Yuasa revealed Daru Healer to soften the blow. Then he swung in with his remaining mystery ogre and took down the Daunting Defender with Inspirit.

Things were downhill from there. The floodgates were opened to swarm attacks from Yuasa. Pacifism made sure the Dive Bomber couldn't race. Miyamori was short on defenders. Symbiotic Elf bought him some time, but not much. Doom Cannon meant he needed Akroma's Vengeance. He didn't get it. 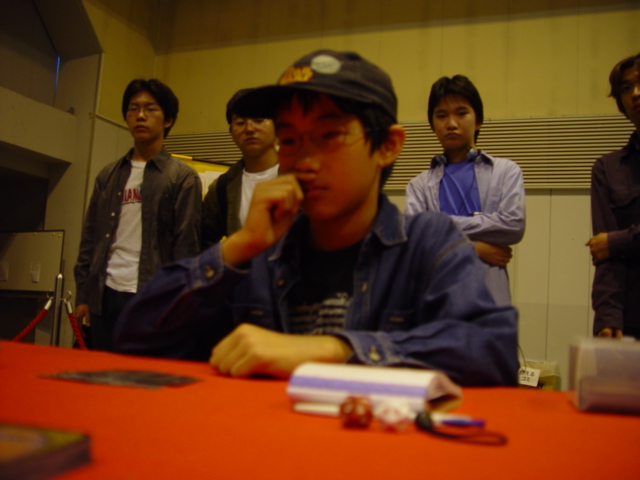 Miyamori's draw for game two was more suited to racing. He started with Thoughtbound Primoc and Dive Bomber opposite Yuasa's Battlefield Medic and Severed Legion. Yuasa made Nantuko Husk, still behind, and Miyamori came back with Wirewood Elf and a secret man. Yuasa hit for four and made a secret of his own.

Now Miyamori was thinking. Four more damage brought Yuasa to ten. He decided to hand it over. Yuasa unmorphed his Daru Healer, and Miyamori chose to Solar Blast the Battlefield Medic, despite holding Chain of Plasma and racing in the air. It still looked like he was ahead, until Yuasa dropped Starlit Sanctum. The race was a lot tighter.

He brought Yuasa to four, planning to kill him on his next turn with the plasma. Yuasa dropped a morphed creature, cycled Dirge of Dread on his Nantuko Husk, then swung for the final eight, aided by Misery Charm.