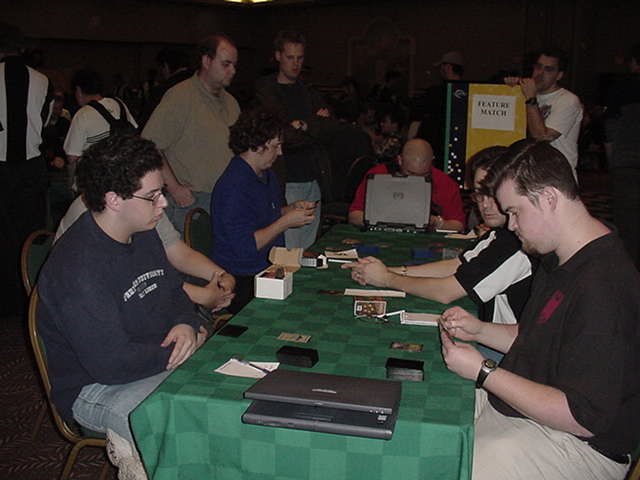 Team CMU has been on quite a roll in recent months, but those were Limited Grand Prixs. In Constructed, team Your Move Games in much more in its element, having put both Darwin Kastle and Dave Humpherys into the Top 8 of Pro Tour New Orleans. Both Mike Turian and Darwin Kastle played Reanimator variants in New Orleans, but each changed decks for this event, though Kastle's deck does share some cards with his New Orleans Top 8 deck (notably Zombie Infestation).

Kastle used Vampiric Tutor to access a Hermit Druid, Elvish Spirit Guide to play it, and Turian and his one Island couldn't do anything to stop him. About 20 cards went to the graveyard when Kastle fetched up his first basic land, including a pair of Ashen Ghouls and enough other creatures that Kastle could bring them back immediately. 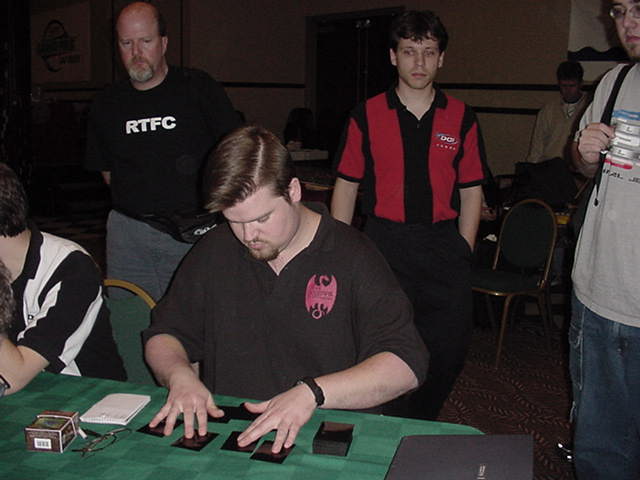 Turian just played another Island and studied the cards in Kastle's graveyard. Turian's deck is an almost mono-blue Draw-Go deck with just enough green for Gaea's Blessing. The only major difference from the deck Jon Ormerod used to finish 8th at Worlds is the 4 copies of Accumulated Knowledge that are great against Donate.

"I think you know a little more about my deck than I do about yours," commented Kastle when Turian scooped before playing a single spell. All Kastle got to see was Wasteland and three Islands. "I don't think you'd have Wasteland in Stasis ... " was Kastle's last comment before the players started sideboarding.

Game 2 went much better for Turian. He used Force of Will to counter a Wild Mongrel that had been played off of two Elvish Spirit Guides. Then he used Wasteland to deprive Kastle of the only land in his draw and Disrupted a Vampiric Tutor cast from the mana Kastle drew out of it in response to the Wasteland. When Kastle got his second turn, he had no permanents, only three cards in is hand, and Turian already had Phyrexian Furnace in play. Morphling came down quickly and cleaned up with plenty of time left to play game 3. 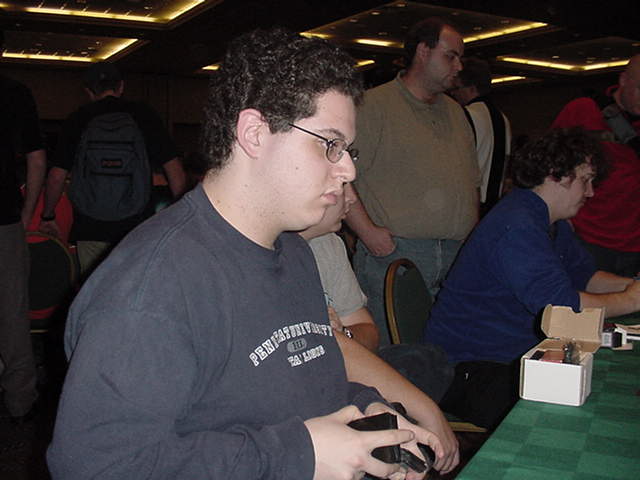 Kastle drew three early Duresses in game 3 which he used to take apart Turian's hand, but Kastle had no real business cards and Turian's three Wasteland-draw deprived him of green mana. Turian had no cards in his hand for a couple turns, but the only thing Kastle could get into play was Squee, Goblin Nabob. Soon Turian had a Treetop Village on the attack and once Kastle drew land Turian just used his permission to prevent Kastle from playing any blockers.

Kastle admitted after the match that not knowing what Turian was playing really hurt him. Turian admitted that after Kastle destroyed him on the second turn of game 1, Turian knew he had no chance to win so he played the entire game just to gain information about Kastle's deck and conceal information about his own.