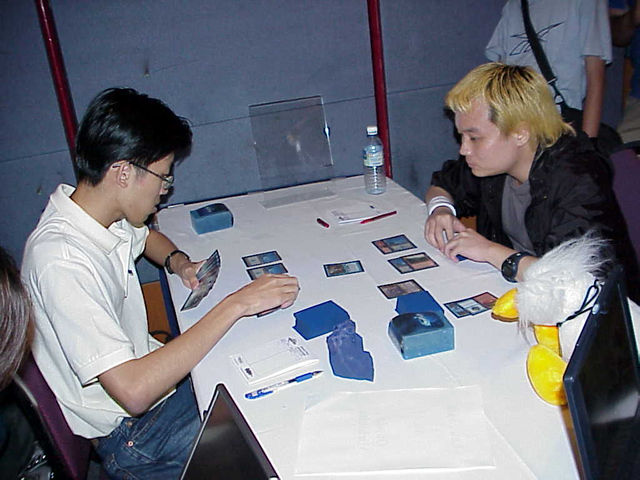 Nothing stirs the heart like an old-fashioned mirror match. This match was mirrored every which-a-way, what with Albertus Law and Nick Wong having tested together to come up with this, their version of Seck-style Control. As with most control-on-control games, this one would probably come down to who had more land.

Wong got to go first in game one, which gave him a big leg up. He Opted, and Iced one of Law's lands on turn two, smoothing his draw while complicating Laws. It also let him get Goblin Trenches into play unopposed, a huge advantage in the mirror. 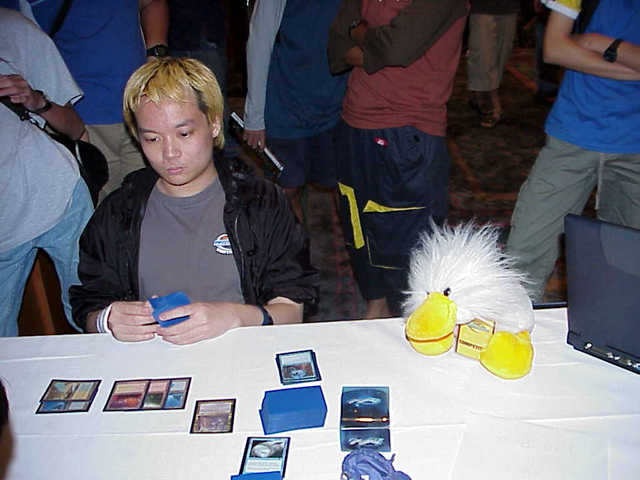 Still, he was at a disadvantage because of the Trenches. Worse yet, Wong was up on land. Wong made two dudes, and Law dug with Repulse, saving himself some pain. His third Fact or Fiction was stopped with Evasive Action, but miraculously his Trenches resolved!

And so began one of the most awkward races. Wong made four tokens and swung successfully. He added two more and tried again. This time Law blew up some of his own land to take down the Goblin-Soldiers, and had a timely Fire/Ice to spare his precious land.

But the top of Wong's deck was serving up land in abundance. He made six more tokens, falling to just three land in play. Law sacrificed two to keep up, running his creatures into Wong's onslaught.

Wong continued his mad sacrifice, and with just two land in play looked to be on the wrong end of things. However, it was he who held Fire/Ice this time, as well as a third land. Law failed to find land at the top of his deck, and when Wong showed him how it was done, he conceded. 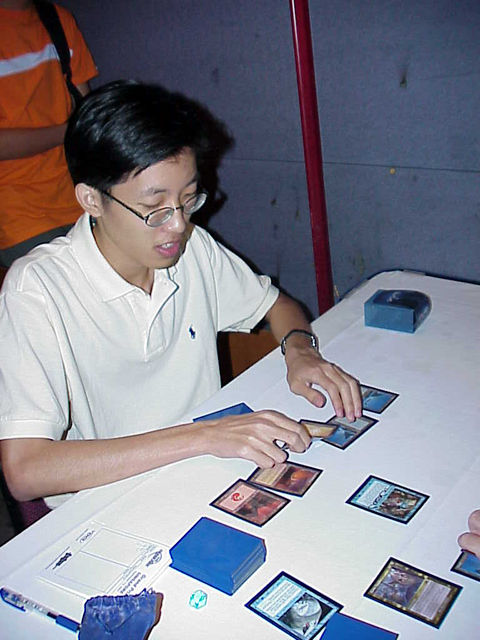 In game two, Wong was short on white mana early, despite cycling an Ice on Law's lands. On his fourth turn he was forced to discard Exclude. He bounced back with Battlefield Forge, but the damage was done.

Law Iced one of his blue sources at end of turn, then untapped and dropped Lightning Angel. Wong was ready with Exclude, but was trumped by Law's Disrupt. It was crippling. For two turns the Angel played Wong's head like the bongos. Law decided it wasn't enough, and played an unkicked Rakavolver. Wong let it hit play long enough to smash it with Urza's Rage.

Both players had stalled at five land, but that was fine for Law and his Angel. Law showed what firm control he had by discarding Urza's Rage with Wong at eight. Wong struggled to stay alive, but his last-ditch Lightning Angel needed two Gainsays for backup, not one. He packed up his cards, saying "Let's not waste time."

There were just twelve minutes left on the clock going into game three. Wong kept a two land hand, going first, and it backfired on him. He found his third land only after Law had five. Law went for a Fact or Fiction at the end of his turn, and Wong thought hard before tapping out for Absorb. Luckily, Law's lone untapped island was an empty threat. 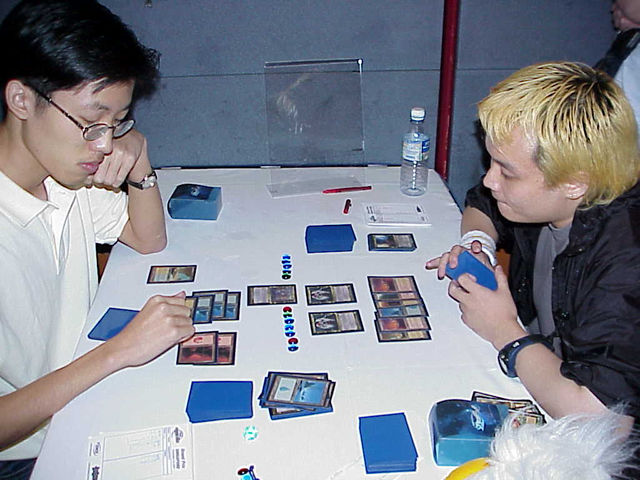 Wong was in no position to push, however, and had to wait Law out. Law's draws complied, as his land of hand wasn't going to do much without a Trenches. Soon he had ten land to Wong's six. He played Fact or Fiction, and scored three land and Goblin Trenches. Wong pushed that very threatening Urza's Rage as far away as possible.

Law Iced one of Wong's only two blue sources to force through his Trenches. Wong untapped and played Meddling Mage. Law Absorbed. The way was thus clear for Wong's Lightning Angel. Law untapped and sent it back. Wong made a second Angel and swung. Law's witty rejoinder was a kicked Rage to the head.

He then untapped and shook out a bagful of tokens, drawing a laugh from the crowd. He took another six from the Angels and started to sacrifice lands. When he was done he had a row of twelve eager Goblin-Soldiers, eyeing Wong's life total, and a lone untapped Coastal Tower. Wong tried his best to stay alive, with Urza's Rage to take down one of the little men and Absorb to stay in the game. Law put on the kaibosh with Disrupt.