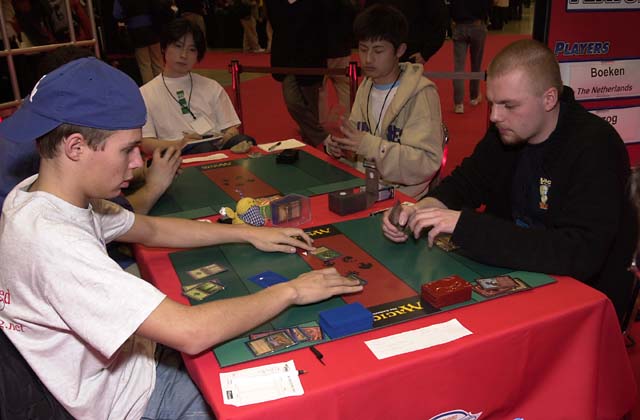 Round six found former European Champion Nicolai Herzog facing off with current European champion Noah Boeken in a not-so classic red-green mirror match. The red green decks of old featured little guys and Lighting Bolts and ways to turn men into Giant mice. People rushed their guys in and capitalized on time and waged an honorable war in the Attack phase. This match, on the other hand, saw both players playing out green and red Nekrataals, relegating the attack step to a one-sided affair. In previous eras of Magic, players called on sweeping removal spells like Simoon and Earthquake to handle the beatdown matchups and the fragile one-toughness mana base of many decks. They devoted few slots to this war, preferring instead to make up for deficiencies versus blue. Fatties, though, ruled our match, as well as most of the sideboards of the Pro Tour, as the mana base has become mostly land and the number of creatures a player has out is limited by the number of guys they are able to Flametongue Kavu and Thornscape Battlemage.

Boeken won the die roll, a very important advantage whenever decks capitalizing on the early game are involved. Though each player included Blurred Mongoose and Thornscape Familiar in their decks, neither was able to produce either in the first few turns, laying only lands. Nicolai broke the ice on the third turn with a Raging Kavu. The Fast Kavu couldn't even survive a turn though due to Boeken's Urza's Rage. Boeken once again laid a land and passed the turn, while Herzog countered with a Familiar. The Familiar was Noah's notice to get started as Thornscape Battlemage kicked the Familiar out of the game. The game rapidly degenerated after Nicolai passed his fifth turn without playing a fourth land or even a creature. All the while, as Herzog agonized over his decisions, Noah mercilessly prodded him to pick up the pace. All of Boeken's baiting and Herzog's lack of land slowly brought a flush to Herzog's otherwise calm face. Boeken soon summoned a kicked Titan and a couple of kicked Skizziks, and though Nicolai found a fourth land on the sixth turn, it wasn't enough. 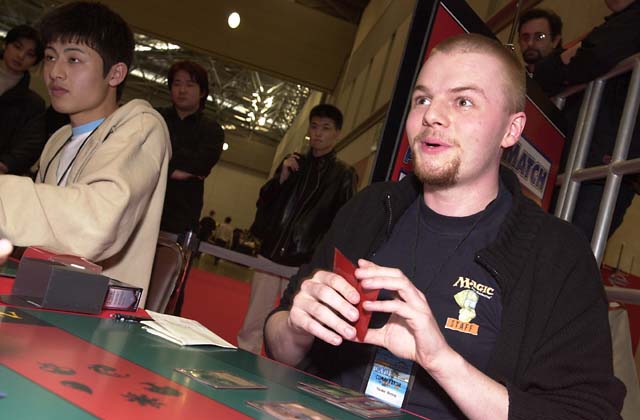 For the second game, each brought in the Shivan Wurms (Best Fattie Ever Printed? Sorry, Wakefieldians...). Boeken completed his compliment of Nekrataals while Herzog brought in at least one Titan. Boeken taunted Nicolai about his choice of Tangle, since he had prior knowledge of his opponent's choices. Nicolai remained calm throughout, answering with small talk and finishing his sideboarding business. Nicolai's choice to remove his four Ghitu Fires seemed sketchy, since he could pretty much count on his opponent having life or creatures or both. Many a match has been decided by a Fireball ripped right off the top. Noah preferred to bench various small creatures such as Yavimaya Barbarian as well as his Keldon Necropolis since his opponent had the option of playing first.

This game started out in a fashion more befitting the builds of the decks. Each player played a Titan on turn two. Herzog scored first blood as Boeken chose not to exchange, probably indicating a hand full of Nekrataals. Herzog, eager to get damage in before the Nekrataal war began, summoned an unkicked Thornscape Battlemage. Had Boeken traded Titans, he probably would have preferred to wait. Boeken summoned a Familiar and laid a land. Herzog kept up his initiative by Battlemaging Boeken's Titan and swinging with his dorks. Boeken traded for the Battlemage and took another two. Now, it was Noah's turn to miss land drops as he was merely able to summon another dork. Herzog made his horde grow and Noah's disappear with a kicked Battlemage. Despite being so far behind, Noah retained the energy to continue to harass Nicolai. As Noah prodded him along, Nicolai plaintively answered, "Again, I have decisions," to which Noah jabbed, "Well, you made the wrong ones last time." Nicolai gave a little shake of his head. Noah ripped a land off the top and joined the Battlemage war. A flurry of Nekrataals from Noah and dorks from Nicolai brought the game into question. Boeken went second though, and was virtually Time Walked by his missed land drop on turn four, so when the Fatties started hitting, Noah's two remaining life points were hard to protect from trampling beasts. 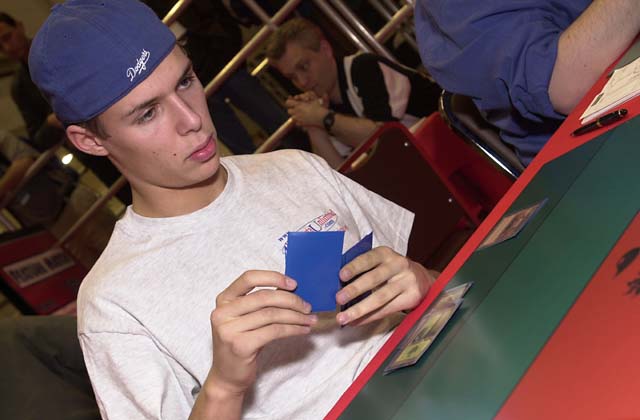 Since Boeken now had the right to first play, he brought his Keldon Necropolis back in. Herzog seemed to give in to the fact that Tangle was indeed awful as he chose to play Scorching Lava instead. Boeken started off slow, Ghitu Firing Herzog's turn to Familiar after doing nothing on turn two. Once again, mana played a large part in the outcome of the game and match as Boeken stalled on four lands. Curiously, despite a lack of increase in Nicolai's playing speed, Noah's banter disappeared as he succumbed to the wrath of the Mana Gods. As the match came to a close, Nicolai began summoning 7/7's and 5/5's. Noah tried to rally offense with an unkicked Skizzik, but his effort was futile.