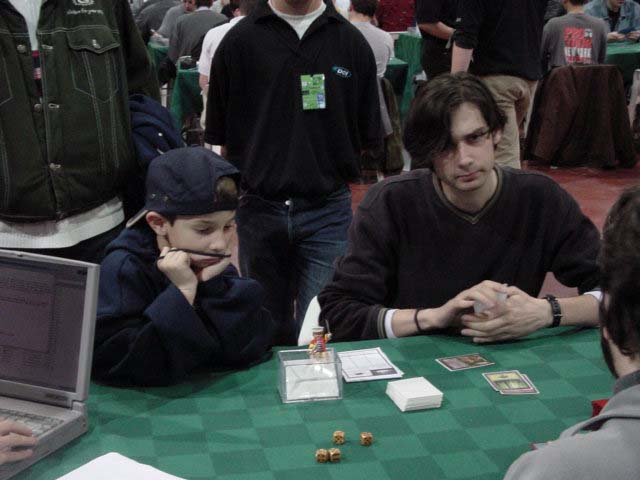 Two rounds away from the end of the day, two Spanish players crossed paths at the feature match table. These players knew each other very well and as soon as they sat down the trash talk began to follow thick and fast. The supersonic friendly banter was hard to keep up for most foreigners as all passing judges added to the incredible noise level. At some point turned into constant pleads to the reporter to "smooth down" the description of any possible mistakes.

Paco came out with full throttle playing a Yavimaya Barbarian and then a Lava Zombie. Alejandro dropped a Tidal Visionary and used a Raging River to send Paco back to square one.

Llopis calmly replayed the Barbarian and tried to drop the Zombie which lead to some rules doubts about the Visionary solved with some extra friendly trash talk. Even a late Magma Burst and a suicide block with the Visionary could not stop Paco's army, especially after the arrival of the Serpentine Kavu and the Phyrexian Bloodstock.

This time they both kept their hands. Alejandro opened with a Phyrexian Slayer and Paco dropped an unkickered Duskwalker only to bounce it immediatelly with a Lava Zombie. Alejandro dropped another flyer: a Waterspout Elemental which Paco promptly used a fresh Smoldering Tar to blow out of the sky.

Paco Llopis then added a Phyrexian Reaper to the Zombie and for a second it looked like he would rule the table, especially after he killed the Slayer with a Magma Burst. Alejandro did have a word to say about that. In fact, he had two words: Power Armor.

Alejandro used a Rushing River to buy some extra time and dropped a Visionary to hold the fort. Paco tried to replay the Zombie after dropping a Barbarian. Alejandro was waiting for that and he used a Magma Burst to the Barbarian, and Paco, to bounce the Zombie right back. Then the Visionary got zapped and we where back to a clean table. 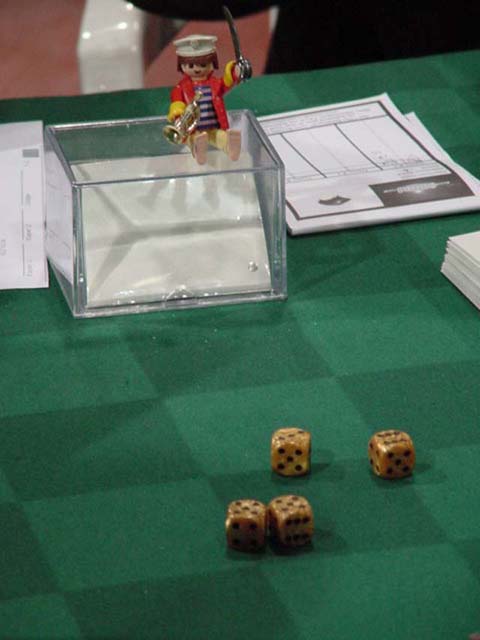 Paco dropped a Nomadic Elf but Alejandro bounced it back to the top of the library with a Hunting Drake. Instead of replaying the Elf, Llopis played a kicked Duskwalker. That looked like the ticket to avoid the Power Armor until Alejandro found a Vodalian Zombie to block.

Llopis was again in trouble as the latent threat of the Armor would sooner or later get him into big trouble. He dropped a Root Grevil but little did he know that the end was near: Alejandro used a Magma Burst on Paco and the Duskwalker and facing the finishing blow of the Armored flying Drake Paco quickly conceded.

Alejandro opened with a Tidal Visionary that stayed alone for three turns. Paco couldn't drop anything despite playing lands in every turn. He was then joined by a Mire Kavu but Paco found a Trench Wurm to stop the bleeding.

Dominguez still couldn't find black mana, but he Excluded a Kavu Climber (talk about card advantage!) and dropped the dreaded Power Armor. Paco uses a fresh Tar to kill the Kavu and swung with the Wurm after some careful consideration.

His opponent had a cool trick in store: his Visionary switched the colour of the Wurm and a Hunting Drake bounced it back to the top of the library! Llopis was not amused by this and quickly got rid of the Drake asking Alejandro where his Merfolks were since he only seemed to have islands (he did have one Mountain). Indeed Alejandro was doing his best to get by with a hand full of black cards.

Paco then forced the huge crowd watching the game to lean forward and read a card: Loafing Giant. After we all had a look at it, Alejandro tried to win some time by Repulsing the Wurm, but still couldn't find black mana. Even that didn't slow Paco: he replayed the Wurm and then dropped the Lava Zombie which lead to another rule speed trash talk.

In the end the Wurm changed colour and Paco had to bounce the expensive Giant. The Visionary got a boost from the Armor and blocked the Zombie but then the game took a strange turn. It seemed the life totals on both score pads were different and no one could understand why. Since he felt the game was almost lost Alejandro quickly adjusted his pad to the lowest value of his life totals. 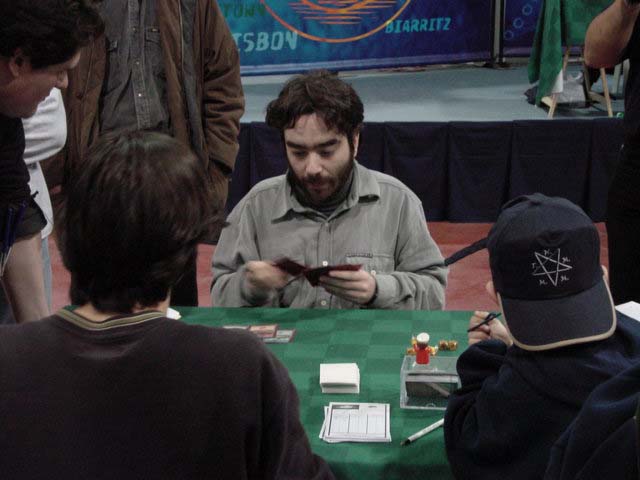 After the Giant rejoined the table along with a Nomadic Elf, Alejandro conceded in disgust and started flipping cards to find his much sought-after black mana sources... fifteen cards down. Which led to another round of trash talking and an important revelation: it appears some of the trash talk was based on a alleged McDonald's meal debt that Paco still has to pay Alejandro.

This was a highly chaotic and extremely funny round to follow. It featured two great players who kept telling me what to write, which didn't make my life any easier but a lot funnier.