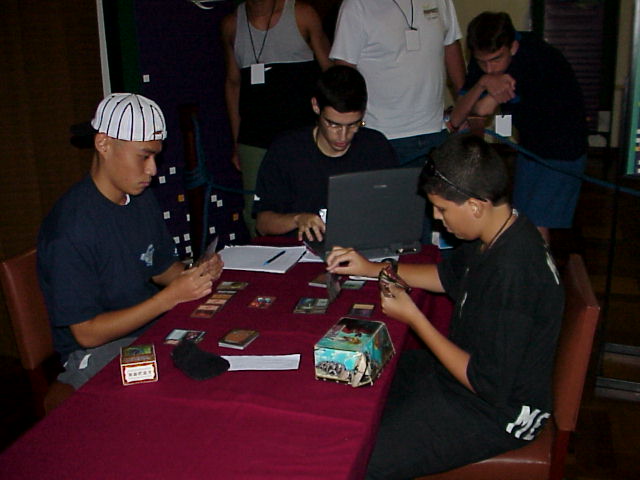 Michel had three byes while Pedro got his fifteen points by playing, and winning, five real rounds. Motta couldn't help but to smile for some pictures while his friends taunted him marking the start of another All-Latin feature match.

Pedro came out flying with a Dream Thrush and a Kavu Recluse before Michel got his first creature, a Slingshot Goblin. The Goblin met an Agonizing Demise before it could affect the game. Pedro tried to cast a Mire Kavu but Michel promptly Excluded it.

Michel played an Attendant that was burned by some Tribal Flames but his next creature, a Faerie Squadron with kicker, seemed to signal the end of Pedro's removal. The squadron stopped the attacks while Pedro played a Sea Snidd and a Firescreamer.

Michel started to regain control of the match by Singing the Thrush. He then played a Stormscape Familiar and used a Exotic Curse to get rid of the Sea Snidd. With Pedro's creatures dwindling away Michel was about to walk away with the game at seven life. He played an Urborg Emissary, bouncing a creature, and finally allowing his Squadron to go on the offensive. Shirozono also got a Keldon Necropolis and used it to trade the Emissary for the Firescreamer. 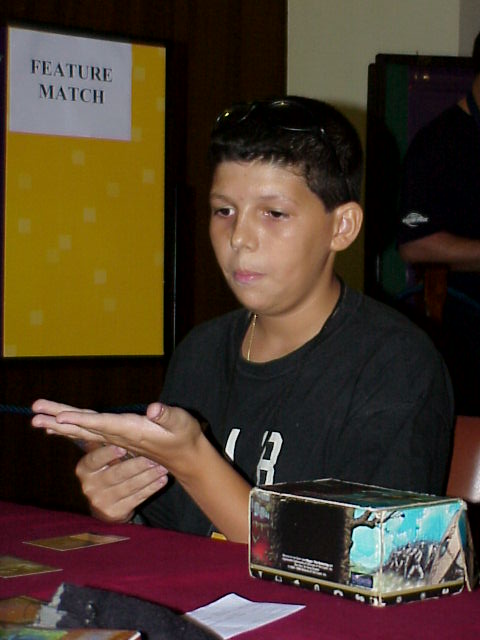 Pedro tried to come back with a Tower Drake but a Stormscape Battlemage killed it. To gain some time he used a Wash Out to bounce the two Blue creatures. Michel took the time to play a Ravenous Rats before recasting the Squadron and onlookers could see the despair in Motta's eyes. He called the judge at a point because Michel underpaid the activation of the Necropolis but everything turned out ok. There was nothing Pedro could do and Michel finished the match in few turns.

Motta opened with a Ravenous Rats that nailed a Mountain. The Rat was the best he could do as he lay Swamp after Swamp. Again Michel got his Keldon Necropolis and he Excluded a Sea Snidd when Motta finally got his Island. The Rats lonely road to victory was cut abruptly short by the sudden apparition of a Pouncing Kavu, with kicker.

Pedro now had to find a way to speed things up or remove the Kavu. He seemed to choose the former when he played a Kavu Aggressor. After some long consideration Shirozono used a Stormscape Battlemage to get rid of the Aggressor. Motta was now falling behind and having a hard time putting up a fight. Little did he know how scary Michel's hand was: Singe, Flametongue Kavu, Exotic Curse, Tribal Flames...

Finally Motta played a Hooded Kavu but lost the Rats to the Singe and the Kavu to the Flames. To rub some salt in the bleeding wound Michel then played a Planeswalker's Scorn. Pedro tried to breathe some live back into the game by bouncing both creatures with a Nightscape Battlemage. The Kavu came back hastily to bring Pedro down to seven. He needed a good answer and he needed it fast. 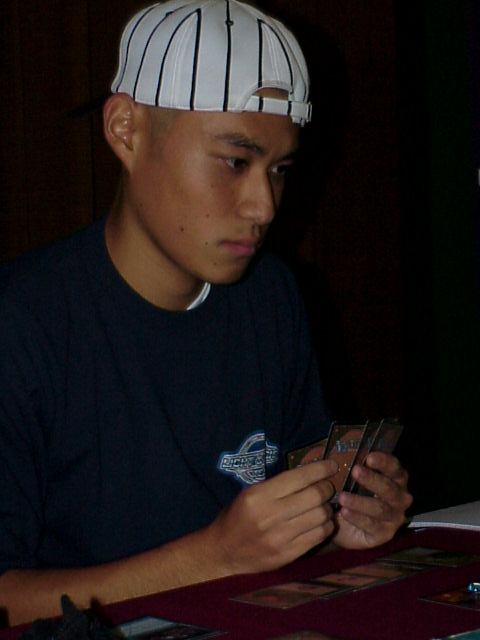 He Terminated the Pouncing Kavu and Michel sacrificed it, using the Necropolis, to get rid of the Battlemage. Motta then played a Kavu Recluse. He needed to move fast to stay away from the Scorn. Michel activated the enchantment and hit a Death Bomb, killing the Kavu. He then played a Metathran Zombie. The Zombie and the Scorn got bounced by a Rushing River, with kicker. Motta was obviously trying to buy some time but Shirozono's deck gave him no quarter. The Stormscape Battlemage and the Scorn came back. The Battlemage died surrounded by Tribal Flames.

When the Scorn hit his Death Bomb again, killing his last creature, Motta conceded in disgust.