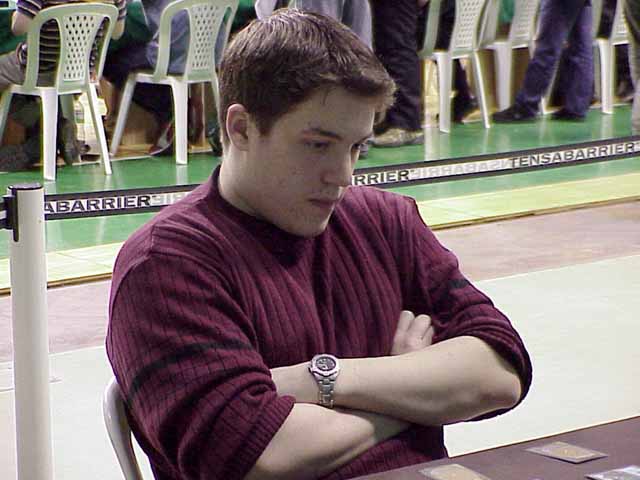 In the sixth round, Phil Pettifer from the United Kingdom faced former World Champion and Pro Tour Player of the Year, Kai Budde from Germany. The two players were both at 12 points and needed to win to stay in contention for top 64.

Pettifer won the die roll and chose to play. He played some lands and a turn three Alabaster Wall while Budde got a turn one Trickster Mage started attacking. The German failed to play anything during his third turn, while Pettifer got out a Nightwind Glider. Fortunately, Kai drew another land and played his own flyer, a Rishadan Airship. So they both attacked for two for a while, Pettifer preventing one damage from the Airship with his Wall.

The Englishman summoned a nasty Primeval Shambler, and with plenty of swamps it posed a major threat to Kai. But Kai had a threat of his own, a Kyren Negotiations, and suddenly, all his creatures were Tims. A Shock Troop helped as well, but Pettifer had good creatures of his own; he summoned a Belbe's Percher, a Bog Smugglers and a Ballista Squad.

Kai was running fairly low on life, but the Trickster Mage tapped the Shambler for a turn and a Ribbon Snake came into play. Pettifer seemed to forget about the fact that both players could play the ability, though, and he sent the Percher in just to watch it die to the Snake. Kai produced a Chimeric Idol and a Stinging Barrier, and although he was at four life only, he managed to block the last all-in attack and ping Pettifer to death.

In the second game, it was Pettifer's turn to stall on lands. He failed to draw a third land for a turn, just like Kai did in the first game. However, he had the Vendetta to kill Budde's Waterfront Bouncer, but a Rebel Informer and a Shock Troops soon replaced the Bouncer.

Fortunately, Pettifer drew the third land, and he got out his Alabaster Wall and the Nightwind Glider. But Budde continued the beats by casting a Gerrard's Irregulars, and a Lunge took care of the Glider. After blocking, the German also used his Shock Troops to finish off the Alabaster Wall, and things looked bad for Pettifer. 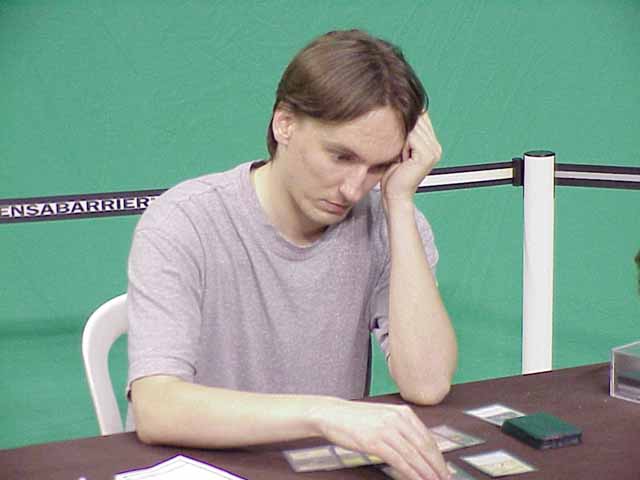 But the Englishman hung in there, he summoned a Bog Smugglers and then an enormously important Troubled Healer along with an Undertaker. Budde got out his Coastal Hornclaw, attacked once and got Pettifer down to two measly life - but that was it.

The Healer stabilized the table situation for Pettifer, and he could start casting creatures that would stay on the table. He got out a Rootwater Commando, a Belbe's Percher, used the Undertaker to retrieve the Glider from the graveyard and finally cast a Rackling. The Commando hit Budde for two every turn, and even when Budde drew an Arc Mage, he couldn't take that much advantage of it because of the Healer.

Finally, Budde drew his all-important sideboard card, a Magistrate's Veto, and suddenly the Rackling was Pettifer's sole blocker. Pettifer was soon at one after an attack from a Jhovall Rider and a Coastal Hornclaw, but he answered by attacking back and taking Budde down to one life as well when the Rackling had done its job.

Things looked really bad for Pettifer though when Budde sent all his creatures in for one last attack. But he had drawn the one card he needed, a Disenchant that removed the Magistrate's Veto and made his creatures able to attack. So he just blocked the attackers and attacked one last time for the victory.

The final game started with only five minutes left to play. So both Kai and Phil played very, very fast. Budde dropped lands, a Rishadan Airship and a Chimeric Idol. Phil played lands, a Phyrexian Ghoul and a Rootwater Commando. Both players attacked. Budde cast a Flowstone Crusher. Pettifer had the Sever Soul and got ahead on life. Budde put out a Hired Giant, but Pettifer again drew the broken Troubled Healer, and with plenty of lands in play, he instantly got the upper hand.

A Rackling caused further trouble for the German, but a well-timed Rhystic Deluge made him able to get Pettifer down to three, not counting the lands. That was it. A Nightwind Glider and a Ballista Squad came into play on Pettifer's side of the table, and Kai was just unable to win as the Englishman at that time had nine lands in play - 18 extra life. So just into the extra turns, he died to the islandwalking Rootwater Commando and the Glider.