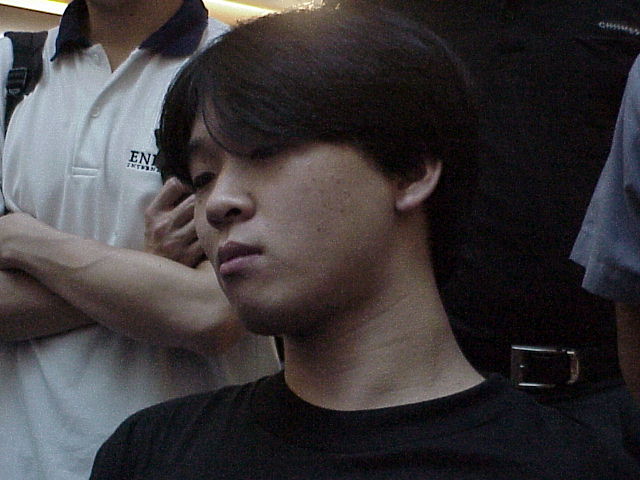 Settling in for Round 6, both Royce Chai and Komiya Tadayoshi looked good for Day 2. Chai is Singapore's highest rated player and he garnered a lot of attention from the bustling crowd while playing. Komiya Tadayoshi was incredibly cool coming into the round, using a lot of silent psychological tactics to intimidate Chai. From the loud clapping sound he made while shuffling to the forceful, slamming motions as he played his lands, Tadayoshi was solidly in control of the tempo. Royce, like many players, chose to play the popular Trix deck, using the Illusions of Grandeur/Donate combo to win, while Tadayoshi brought Counter-Oath, a less popular, but very strong strategy. He won the die roll and chose to play first.

Tadayoshi led off with a Treetop Village while Chai probed his hand with Duress. Royce showed a hand with an Annul, which was taken, and a Force of Will. With nothing to lose, he went into aggro mode with the Village, and smashed his face three times while Royce was setting up his Trix combo. Unfortunately for Tadayoshi, Chai was setting up the combo - and Tadayoshi was not drawing the counterspells to deal with it. Chai cast his Necropotence, which was backed up with a Pyroblast, when Komiya tried to Counterspell it. With Necro in play, it was just a matter of time before Chai had all the components of the combo and everything he needed to defend it. Komiya tried to race the cumulative upkeep, but he was not able to do enough damage before he ran out of mana. 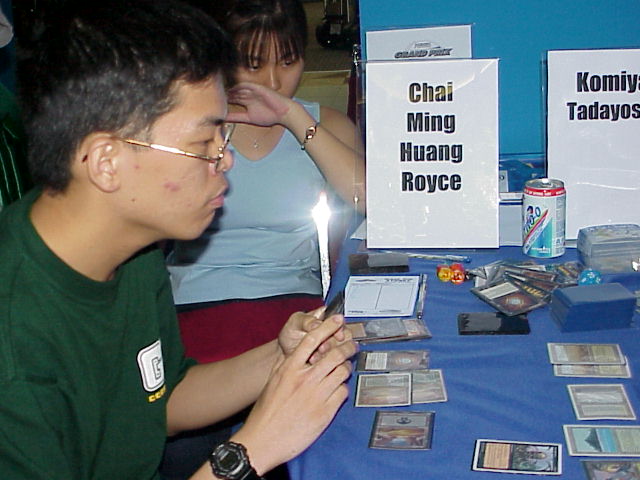 Tadayoshi was reeling from the almost perfect win by Royce, but he recovered in time to play first. Chai played a Duress, but Komiya used Brainstorm to hide his spells, revealing only sideboarded Victual Slivers (!) and land. He slammed down a turn two Sliver that smacked Chai twice before he played a Phyrexian Negator, having to cast it with a City of Traitors. Royce was pretty mana shy, so he couldn't afford to attack into the Sliver. Tadayoshi played a second Victual Sliver and sent the other one in for attack. Royce played a Swamp, losing the Traitors, to play a Masticore. He attacked into the two Slivers and, surprisingly, it was not double blocked (which would have caused Chai to sacrifice all of his permanents). Royce quickly lost all of his lands and struggled to stay in the game - but he quickly realized that no more land was coming and so he conceded. 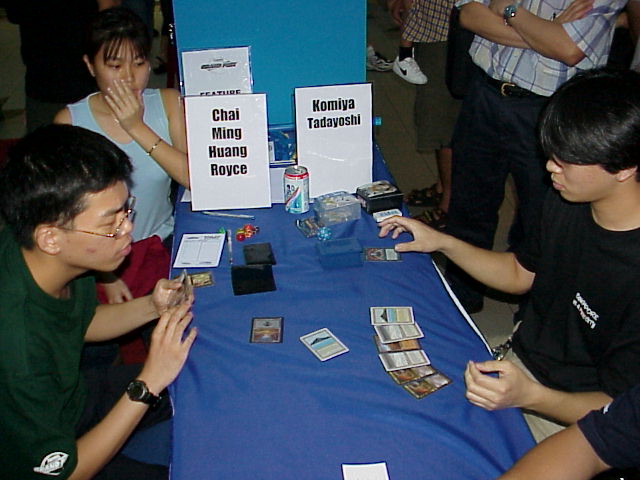 Rattled from his loss, Chai questioned some of his sideboarding decisions, but chose to leave the deck in its aggressive format, with Negators in. It was a good choice, because he'd have to pull the combo twice if Tadayoshi had a Victual Sliver. In game three, Komiya played very loudly, slamming his cards on the table. It contrasted with his silence strangely. The two players exchanged under ten words the entire match. Komiya again played a second turn Victual Sliver, while Chai went digging for a Necro with Consult. After losing twenty cards on the Consult, his Necro was Force of Willed. He then played a Negator, which was Mana Leaked. With a hand of three lands, it was looking grim - and the Victual Sliver was still hitting him. He played a Brainstorm, which was Pyroblasted, as Tadayoshi smelled blood in the water. He Wastelanded one of Royce's lands and attacked. Chai slowly drew and, looking at the freshly-drawn Negator, could only hope. He tapped 2B and Komiya tacitly assented. Komiya blocked it with the Sliver and gained four life - but it was not to be. The Negator came over five times, and Tadayoshi drew counters and Seals of Cleansing. With no other options available, he extended his hand.