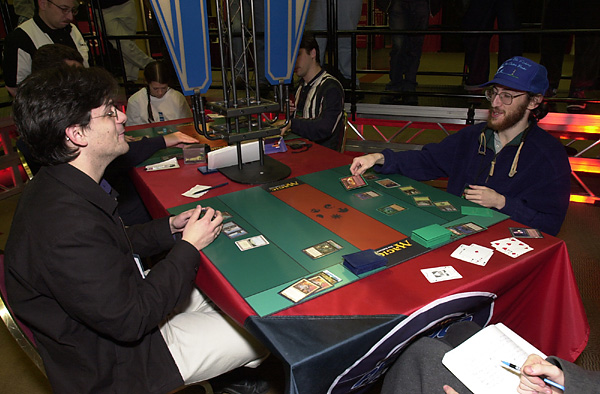 Seth Burn was not a model of confidence going into this round. The competitors knew each other's decks, and Burn was certain that Terry Borer's control deck had an overwhelming advantage. Borer was unconvinced. He had tested a great deal for this, his first Pro Tour after a two-year absence, and thought the matchup skewed in the other direction.

Burn won the coin flip and naturally chose to play. A series of land drops from both men culminated in Burn's turn-three Fires of Yavimaya, which went uncountered by Borer. He had a Power Sink ready for Burn's next play of Blastoderm, and so was unscathed going into his fourth turn. Here he missed a land drop, a fact made up for by his hand full of goodies.

Now, one might suppose that Pro Tour players are the top of the line in observation. That being the case, how would one explain the fact that neither player noticed when, on his next turn, Borer drew a card from his sideboard?

The reason is as follows: Wizards of the Coast designed a standard playmat for their ESPN coverage. These same playmats are being used for the feature matches, as a way of training the players in their use. They are very rigorously structured, with a particular place for the library, graveyard, non-land permanents, other permanents, as well as a special "Red Zone" for combat and the stack. This structure makes following the game on camera very easy. Unfortunately, because the camera faces the board from one side, both players' libraries must be on the same side of the mat. This means that one player will have his library on his right, and another will have his or hers on her left.

Terry Borer usually keeps his library at his left. Today, his library was on his right. Having no better place for his sideboard, he put it at his left side. It was so natural for him to draw from there that he didn't even notice until the middle of Burn's next turn. 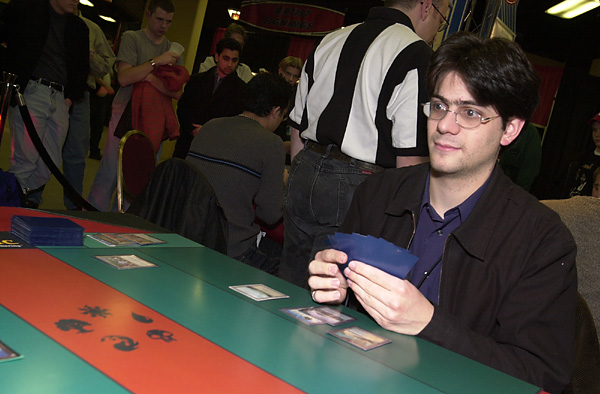 This is ordinarily a game-loss offense, but because of the unusual play conditions, the judge ruled it as a minor procedural error, backing up the play of the game to the point the mistake was made. The correction benefited Borer: he drew his fourth land.

The calamity undone, Burn drew and played Jade Leech. Borer used Dismantling Blow to remove the Fires, saving himself five damage. He untapped, drew and passed back to Burn, who brought out a Chimeric Idol. Borer had a second Blow, so Burn's Leech attacked alone.

Borer dropped Story Circle, naming green, and looking like he could finally stop Burn's offence. Burn was ready with a second Idol. Borer played Tsabo's Web, looking for answers and finding none, while Burn asked a great question in the form of an unexpected Two-Headed Dragon.

Borer pounded the top of his deck, and was rewarded with Wrath of God.

The Idol was still a threat, though, and Borer was getting low on life. Burn cast a Saproling Burst, which resolved. At the end of Borer's next turn, Burn made some tokens, preparing to attack. When he did so, Borer used his third Dismantling Blow to destroy the Burst, instead of shattering the Idol and using his Story Circle to prevent the token damage, but his reasoning was soon made clear. He untapped and used Recall to bring the Blow back. When he tapped out to destroy the Idol, however, Burn took the opportunity to cast Assault twice, killing him.

Between games, Mark Rosewater and Seth Burn treated onlookers to a spirited discussion of the eternal question "If Buffy was a Magic card, would she be green, or white?" The author wishes he could make this stuff up. A more normal discussion followed, bringing Borer up to speed on the debacle that was Tolarian Academy.

Burn mulliganed to start game two. Both men started out with mana sources, Burn's turn-three Fires got Disenchanted, and Borer again got stuck at three land. He joked that it followed from his "old-school" deckbuilding techniques, requiring decks to have a low land count. 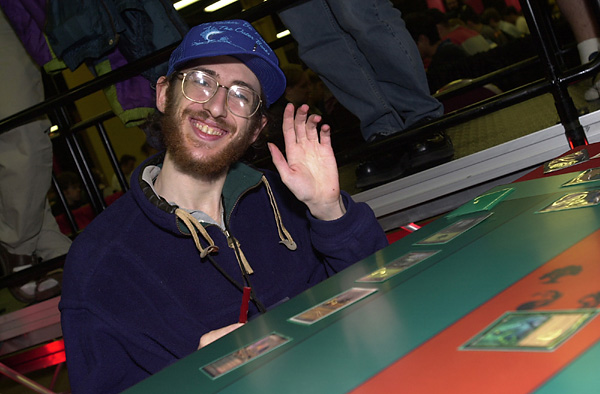 Burn made a Bird of Paradise, and then the uncounterable Kavu Chameleon. Borer found a fourth land, but had no Wrath. At the end of Burn's next turn, he cast Fact or Fiction. Burn split the cards into three land and a Tsabo's Web on one side, and Wrath of God on the other. Borer was quite pleased with his four-mana Impulse. He did not cast it the next turn, however, laughing as he proclaimed that good players always seek out card advantage.

But Burn had snuck out a Fires of Yavimaya, and on his next turn cast Blastoderm, which Borer Absorbed. The three life was taken with interest by the Chameleon, and Borer had to Wrath. Burn played another Chameleon, knocking Borer to seven. Borer was forced to tap low for Blinding Angel, hoping to strand Burn without an attack phase, but Burn's hand was solid gold, with another 'Derm waiting in the wings. Borer chumped with the Angel, drew, and conceded.