and Paul knew they would be playing each other this round since they're both 2-0 in their pod, which isn't surprising since they're both very good with likely the two best decks in the pod. It is a green-blue-red mirror in which Paul has a very solid deck with small guys and lots of card drawing, while Antonino has lots of mana acceleration and large men. After talking to both of them, each considered himself the favorite.

Antonino won the die roll, and chose to keep his opening hand, Paul kept as well. Antonino thought for a while on his first turn deciding what to do with his Utopia Sprawl, before playing it and naming Blue. The first creature on board was Antonino's turn-two Gristleback. He added an Ogre Gatecrasher, before Paul got on board with a Carven Caryatid. Antonino could do nothing but pass the turn back on turn four. It's a shame he didn't save the Gatecrasher. A Plaxcaster Frogling for Paul and the players settled into what looked it was going to be a long grind. 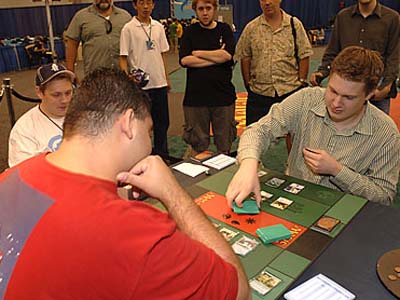 A mirror mage with Simic meant there would be some serious thinking involved.

Paul played a Selesnya Guildmage, but didn't have a fifth land with which to activate it (each player had a bounceland in play by this point). Interestingly, he didn't move a counter from his Frogling to the Guildmage to protect it from any potential removal from Antonino. Paul complained about Antonino's pace of play and brought up the topic of ice cream to distract Antonino further. Antonino ended up playing a Minister of Impediments and Farseek before passing the turn back to Paul, who Scattered the Seeds.

The Nodorog got quintuple blocked, and Paul took 7, going down to 11. Antonino followed up with a Helium Squirter adding to the pressure he just put on Paul. Rietzl went deep into the tank next turn, or perhaps he was just letting Antonino stew. He had an Orzhov Signet which gave him the white mana he was missing for his Guildmage, and the black mana he was missing for the Consult the Necrosages he cast on himself. He passed the turn without making another creature. Antonino attacked for three with Helium Squirter and cast a Verdant Eidolon, onto which he put a counter, giving him another flyer and putting Paul on a two-turn clock.

Paul played Ocular Halo on his Guildmage, which got tapped in response. He followed up with a Snapping Drake, and moved a counter onto it from Plaxcaster Frogling in the hopes of stopping Antonino's meager air force. On Ant's turn the Helium Squirter jumped the Verdant Eidolon, and Paul chose not to trade Snapping Drake for it.

Paul started his turn with a Train of Thought, replicated once, digging for one of his mountains for the Steamcore Weirds in his hand. He found it, destroying the Helium Squirter in the process. With his flyers gone Antonino went into the tank before playing attacking with his Ogre Gatecrasher and 3/3 Verdant Eidolon. Paul played a Plaxmanta and double-blocked the Ogre Gatecrasher, and put one of his tokens in front of the Verdant Eidolon. Antonino refused to let the judge replace the penny that represented the remaining token with his player card.

Each player played a Simic Guildmage giving all involved a headache. It really didn't matter though as Paul now had a dominating board position, and was finally getting around to the mundane task of actually dealing 20 damage to Antonino. De Rosa had one last chance when he drew Infiltrator's Magemark, but Paul knew that he could block with Carven Caryatid.

"I respect you for trying," said Rietzl.

Paul made sure I defined "letting them stew." It's his favourite play in all of Magic. It is basically stalling, you just sit there and think with nothing to think about it. Last week Paul even lost a game on Magic Online because he let someone stew a little too long and timed out before he could cast his turn-three Runeboggle.

Antonino started the second game with a Farseek, and Paul matched with an Orzhov Signet. Antonino's turn three consisted of a Silhana Starfletcher and Izzet Boilerworks, setting him up to cast a real monster on turn four. Paul had Utopia Sprawl, naming red, and Plaxcaster Frogling on his next turn giving him a 3/3 and access to all five colors.

Instead of a giant monster all Antonino had was a Simic Signet, it looked like his draw didn't really pan out. Paul played didn't play a land, and simply passed after attacking for three on turn four, clearly representing Scatter the Seeds. Antonino simply flipped the top card of his deck (a land) into play, and Remanded Paul's Scatter the Seeds when he tried to get the attacking Starfletcher. Antonino had Burning-Tree Bloodscale after combat, which I'm sure he was a bit disappointed by.

Paul attacked and played a Simic Guildmage after combat. Antonino had another land, and thought for a long while before doing anything. Paul tried to distract him by asking "why do you bite your thumbs so much?" to which Antonino responded "sometimes I get hungry...".

Paul simply passed the turn without making a creature, giving them approximately equal amounts of power and toughness on board, but Paul could move around the power and toughness as he chose because he had three counters on his creatures, and Antonino had two on his. Antonino had an Absolver Thrull for Paul's Utopia Sprawl, and then decided how Paul was going to block before sending in his Gristleback and Burning Tree Bloodscale. Paul had repeal for the Bloodscale, letting him block however he wanted. He blocked the Gristleback with his three Antoninos, all of which died. Paul again quickly sent his Frogling and Guildmage before playing Bioplasm.

At the end of his turn life totals were 16 for Paul and 7 for Antonino, with a 2/2 Frogling, 3/3 Guildmage and 4/4 Bioplasm for Paul against Absolver Thrull and Silhana Starfletcher for Ant. Ant had a good turn playing Vedalken Dismisser and a Burning Tree Bloodscale after combat. Paul sent his men in again, Antonino double-blocked the Guildmage, which ended up trading for the Bloodscale, and giving his counter back to the Frogling.

Bioplasm came down again after combat. Antonino had a Pollenbright Wings for his Vedalken Dismisser, and attacked with it before passing the turn. Paul untapped and replicated Train of Thought once, while both players lamented how poorly they were playing. The Bioplasm attacked, didn't get big and traded with Absolver Thrull and a saproling, before Paul revealed the extent of his manaflood and passed the turn without another play. Antonino just attacked with the Dismisser and passed back.

Paul ripped a Steamcore Weird which dealt with the Pollenbright Wings, and had an Ocular Halo for his Frogling which gave him an unstoppable card-drawing engine. Antonino attacked with the Ogre Gatecrasher he played on the previous turn and cast Transluminant before passing to Paul, who said "Draw a card" three times within five seconds. Antonino topdecked Tolsimir Wolfblood and sent in his team of three saprolings, a Gatecrasher, Starfletcher, and Transluminant. Paul made the best blocks he could with only two creatures, and then conceded, and asked himself if he could have won had he played differently. Antonino claimed he played poorly, but I was very impressed by how he played that game. 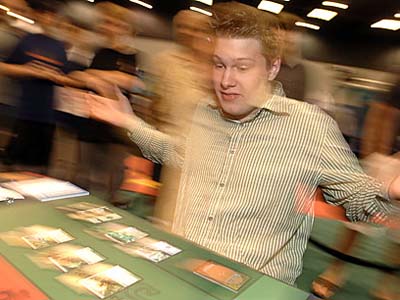 Rietzl was left without options in Game 2.

They got ready for Game 3 with 11 minutes on the clock. Both players kept their opening hands once again, and played very quickly for the first few turns wanting to avoid a draw. Paul had a quick draw with two Signets and a Carven Caryatid and Bioplasm in play while Antonino was missing green mana and discarded a Farseek to his turn-three bounceland. Paul's wall got gatecrashered, but he had a Selesnya Guildmage to follow up.

Antonino Infiltrator's Magemarked his Ogre Gatecrasher, and left it on D. Fortunately Paul's Bioplasm missed and Ant got to trade. Paul didn't even crack a smile, or let him stew when he Runeboggled Antonino's Tolsimir Wolfblood on turn six. Antonino had two Silhana Starfletchers for the next turn, but looked like he was going to have a lot of trouble beating Paul's Guildmage.

Paul sent his team of three saprolings and a 3/3 Plaxcaster Frogling into the Starfletchers, losing two tokens and putting Antonino to 8. He followed up with a Steamcore Weird to remove one of the Starfletchers and keep the pressure up. Antonino had a Minister of Impediments and Burning-Tree Bloodscale for his next turn. The Bloodscale got Weirded before Paul attacked, and the Minister traded with the Guildmage with some help from Silhana Starfletcher, as Antonino went down to two.

Paul made the same play as the last four turns, turning all his creatures sideways. Ant blocked two saprolings and chumped the Frogling, saccing his newly made Gristleback to go to 1. Antonino could do nothing to beat Paul's exceptional draw and extended the hand.