Round 6 Feature Match: A Slow Death

With five rounds of Standard play out of the way, Carrie Oliver of Britain and Ricky Sidher of the United States sat down with forty cards in their hands. The new format for the final three rounds of the day? Dark Ascension/Innistrad draft. Both were playing to keep hopes of Day Two strong, and shuffled quietly with little talk while waiting for the round to start. 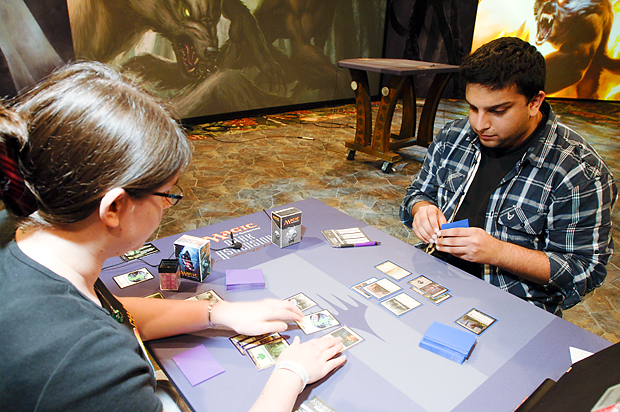 Despite losing the die roll and taking a mulligan to six, Sidher was still the first to the battlefield with a second-turn Unruly Mob. His opponent was close behind with Elder Cathar, but Sidher moved all-in on the Mob and pumped it with a Bonds of Faith. He seemed to be taking an early lead, but when he missed back-to-back land drops and his opponent cast a Midnight Haunting followed by Travel Preparations, which she flashed back to make her team even larger, the American seemed down and out.

The mana screw proved too much, however, as Oliver's team was too large for the under-resourced Sidher to contain and they moved to the second game with Britain in the lead. 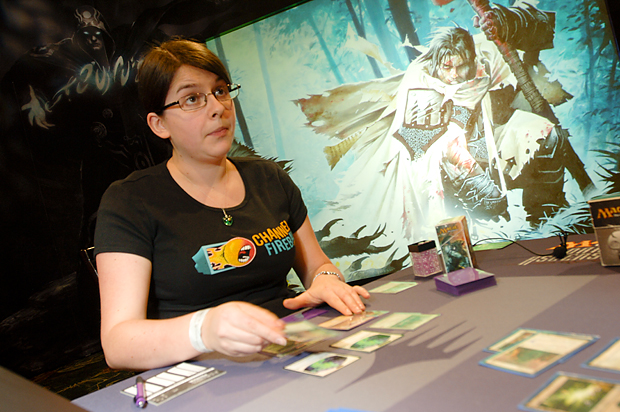 Carrie Oliver capitalizes on a mana-starved opponent for a fast first game victory.

Still quiet as they shuffled for the second game the two players offered up only the occasional polite necessity. "Good luck," said Sidher.

"You too," replied Oliver.

After watching her opponent mulligan in the first game, Oliver returned the favor opting to start on six cards while on the draw. Would Sidher capitalize on her stumble as she had his in the first game? He had a two-drop, but it was a Tracker's Instincts rather than a proper creature. The player who did have a creature for the second turn? Oliver, who cast Darkthicket Wolf followed by Young Wolf a turn later.

Chapel Geist and Elder Cathar hit the ground for Sidher, but when he blocked his opponent's Young Wolf it allowed her to cast a fully powered Festerhide Boar with morbid. The Chapel Geist worked the beatdown angle for the American in the sky and he cast Gavony Ironwright to help hold the ground. With the score at 14-11 in favor of Oliver the match stalled to a halt as Oliver cast her own Chapel Geist to block her opponent's and neither could push damage through.

Sidher managed to take out the opposing Chapel Geist to free his up to attack and began doing exactly that. In short order he had regained the life lead making it 11-6 in his favor. "It's going to be a slow death," Oliver remarked with a smile, a bit of gallows humor as her mana-flooded deck continued to give her no solutions to her opponent's 2/3 spirit.

Fiend Hunter off the top for the Brit changed the equation loudly and Sidher found the tables turned once again. Oliver used the 1/3 to take out the Gavony Ironwright with two +1/+1 counters that had been holding off her team and sent all of her creatures sideways. A Rebuke kept the American alive, barely, and his Chapel Geist became a 4/5 flier thanks to a boost from a chump-blocking Elder Cathar.

Prey Upon for Sidher allowed him to take out his opponent's Fiend Hunter, getting him back his Ironwright. It also left Oliver with no blockers, providing the perfect opportunity for her opponent to press for lethal. When he revealed the sorcery Oliver shrugged dejectedly and reached for her sideboard. 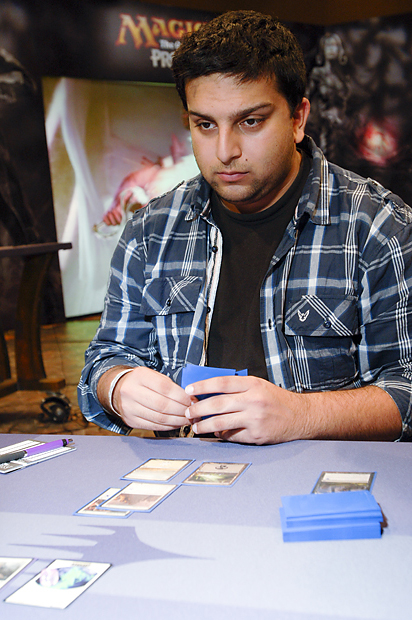 Multiple removal spells give Sidher the advantage he needs to break up a tough stalemate.

"Did you have the Prey Upon?" Oliver asked her opponent as they shuffled for the third game.

"Well, I wasn't playing around Rebuke and Prey Upon…" She sighed.

The match on the line, Oliver wasted no time coming out of the gates in the third. She opened on Young Wolf followed by Darkthicket Wolf, then pumped her 2/2 on the third turn to drop Sidher to 14. Sidher, meanwhile, made one land drop and then began discarding. He hit the second land a turn later and revealed why he had kept such a risky hand: Mayor of Avabruck.

"I knew it!" Oliver smiled. "I figured there was only one reason you would keep that one-land hand."

Burden of Guilt proved a temporary answer to the Mayor, which promptly transformed into Howlpack Alpha, but a Rebuke for Sidher took out the Darkthicket Wolf and gave him a moment to stabilize. His opponent had Bonds of Faith for the Howlpack and a Travel Preparations to flip it back, but then enabled him to begin attacking with it as Oliver found herself short the mana she needed to use her Burden of Guilt.

With Sidher having stabilized, Oliver found herself behind after what had seemed like a quite promising start to the game. She found a Grizzled Outcasts to provide some beatdown, but her opponent cast Lingering Souls and pushed ahead once more. Increasing Savagery made one of his 1/1 Spirits quite a challenge for Oliver, but she was pressuring Sidher with the Outcasts and the two found themselves stalled once again.

A turn later Sidher found the land he needed to flash back the Savagery and Oliver's sigh belied her frustration. "Yep, it's huge," she said taking a whack to the head that proved lethal.

Frustrated with the loss, Oliver still extended her hand and wished her opponent well.