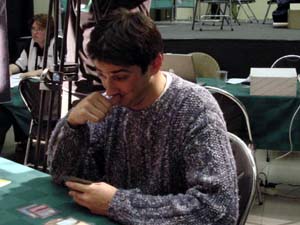 da Costa Cabral is currently Belgium's top player and came the closest to providing them a title when he made the final of GP Madrid at the start of the year. The host nation's finest on display warranted a visit from a roving TV camera. Unfortunately someone appeared to have fed him some defective information as he's bravely turned up with blue-white control today. His opponent, Stefan Fries of Germany, is running the dreaded Affinity deck and will provide a stern challenge.

Da Costa Cabral had to mulligan and after Fries started with a familiar artefact land Da Costa Cabral played an Island. Yes an island, you might remember them. They're like Seat of the Synod but they're not an artefact. Fries continued with the ever popular Arcbound Ravager while Da Costa slammed the brakes on with Damping Matrix. Unfortunately this doesn't stop creatures from attacking and Fries added a chunky Myr Enforcer to the assault.

Feeling the bite from the mulligan Da Costa Cabral missed his third land drop. He went in search with a Thirst for Knowledge and Fries took the opportunity to aim a Shrapnel Blast at his head.

The fourth land didn't appear and when Da Costa Cabral went to Echoing Truth the Enforcer Fries aimed Shrapnel Blasts two and three at Bernado's head to bring the game to a savage conclusion.

Bernardo was forced to mulligan again, and again, but came out much better with a well placed mana leak to prevent Fries from dropping a turn two Enforcer. This time the Belgian reached four mana and cleared out a Disciple and Frogmite. Fries had a second Disciple but had to be much more concerned about the face down morph da Costa Cabral followed the Wrath with.

He popped a Chromatic Sphere for red mana but failed to find a Pyrite Spellbomb to pick off the face down angel. Instead he made a substantial threat of his own as a Ravager appeared to go with the second Disciple.

Da Costa Cabral sent in the morph, still face down, to give Fries plenty to think about. Let it through or block with the Ravager and have bad things happen. He blocked with the Ravager and indeed bad things happened as Bernardo was happy to lose the Angel as he was holding a second Wrath. The Belgian netted a couple of Fries' lands with that trick, but took five to the head from a Shrapnel Blast in the process.

A couple of turns later Da Costa Cabral dropped the elbow as a March of the Machines left Fries permanentless. The Belgian followed up with Damping Matrix and a face up Exalted Angel to take the match to a decider.

This time Bernardo got to keep his seven cards. This game Fries found his Skullclamp though, a card blue-white does not want to see, at least not until they've found Damping Matrix or March of the Machines. Arcbound Ravager was followed by Frogmite and as he'd missed a land drop Fries was forced to pop the Ravager. That didn't help. Bernardo dug his third land out with an Eternal Dragon and proceeded to make life very awkward for the German with a Damping Matrix.

Bernardo hit four land and then had a think. What would it be, Wrath or Machines? Instead it was a face-down Angel. Fries wasted no time in Blasting that out of the way before hitting back for 4 with a Worker and 3/3 Frogmite.

There was a brief query over whether a Chromatic Sphere can be sacrificed for mana under the Matrix (it can as it's a mana ability). Fries aimed a second Blast at Bernardo's head to drop the Belgian to 7 life. His next attack was thwarted with a cycled Decree and Bernardo clawed back some life with a cycled Renewed Faith.

A second Matrix turned up just in case Fries felt like drawing a Shatter. He didn't and kept nibbling with his Frogmite and Worker. He added a second worker but then the game started to run away from the German as Bernardo dropped a March of Machines to both wipe out Da Costa Cabral's lands and turn the Matrices into credible blockers.

Fries wasn't done as he made another Frogmite and charged in. One Matrix traded and the second Frogmite jumped up to 3/3 from a dying Worker. Another Worker appeared. If the German could just force those last points of damage through. 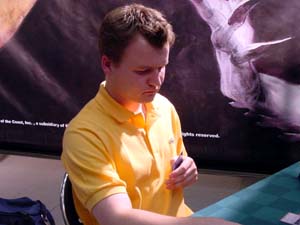 It was an uphill battle though and a hard cast Eternal Dragon didn't make things any easier. Fries couldn't find the steam he needed and the dragon brought his life total down to terminal with a couple of swift hits.

Maybe blue-white control is not quite as dead as people would have you believe.