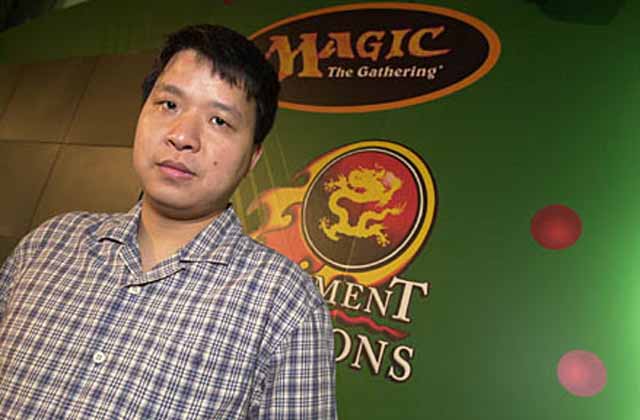 Teddy Ng made Top Eight at last years Asian-Pacific Championships. His opponent this round is Indonesia's Joey Siagian. A relative unknown, Joey is 5-0 with no byes. His deck is an absolute powerhouse.

After trading early plays, the board stabilized with Ng's Razorfoot Griffin holding off Siagian's Slingshot Goblin and Mire Kavu since he had no Swamps. Siagian Probed, finding one. He attacked with the Kavu. Ng removed it with Malice. Next turn he tapped out for Bog Down and Crimson Acolyte.

This gave Siagian a window to dispatch the Griffin with the downright ridiculous Flametongue Kavu. Ng's response was a disappointing main-phase Fact or Fiction that flopped four lands and a Glimmering Angel. He took the Angel. Without another play, he took a beating from Siagian's forces. Siagian kept the pressure up with Urborg Drake.

Ng played the Angel. It couldn't stop the Drake, nor the Hooded Kavu that followed. Ng decided that this race didn't favor him and cast March of Souls. Even after trading Spirits, he was still taking three in the air. He untapped and played Samite Archer. Siagian played Magma Burst with kicker, then untapped and played a second one, winning the game.

He cast Fact or Fiction. Phyrexian Shambler was one of the five cards. Things were looking up. He also had a Crimson Acolyte. The tables had turned. Surprisingly, Ng chose to trade the Acolyte for a Dream Thrush in an all out attack. This gave Siagian an opportunity to destroy his army with Magma Burst. Ng was ready with the unlikely answer of Ertai's Trickery.

Even if he hadn't quipped, "I'm so dead", Siagian's desperation was evident. After reducing himself to three land to buy a turn with Rushing River, he drew his next card and conceded.

Ng played a kicked Faerie Squadron. Siagian topdecked his fourth land to remove it with Flametongue Kavu. Ng left his his opponent empty-handed with a kicked Bog Down, catching two Magma Bursts. He played Galina's Knight to hold the ground.