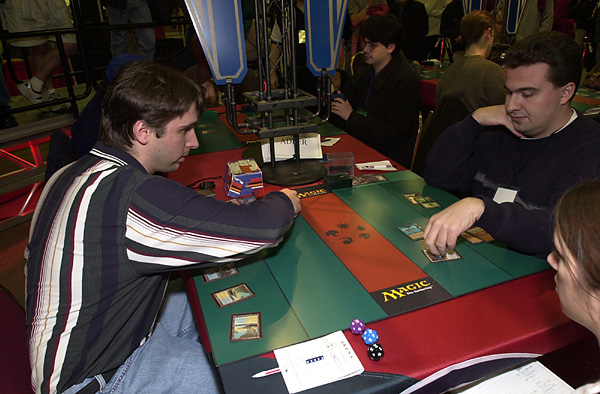 The round actually started with Tom Guevin playing Sigurd Eskeland. However, after a mix-up with the pairings, Frayman subbed in for a very frustrated Eskeland. Frayman brought along his Green/White deck with Blastoderm, Armageddon and Parallax Wave. Frayman is a Pro Tour regular and has a number of Top 16s under his belt. He wasn't too happy with his deck to start with and Guevin didn't help his confidence when he said, "I hope you're playing green because I eat Forests for lunch."

Famous "Tight Tommy" Guevin, 1996 PT LA second place finisher and internet personality, was ecstatic about the match. "I love this format and I love this deck!" shouted Guevin to his crowd of fans. Guevin was playing a Blue/White control deck with Blinding Angel for the kill.

After double mulliganing, Frayman had his two Noble Panthers first Counterspelled, and then Foiled. Guevin followed up with his first Blinding Angel. Frayman then cast Birds of Paradise and a Tangle Wire that got destroyed when Guevin cast Dismantling Blow with kicker.

Frayman dealt with the Blinding Angel by fading it out with the Parallax Wave he cast. But it didn't matter, because Guevin just cast another claiming, "Angel is exciting. That's a beat stick!"

The next play found all creatures, including the newly cast Jade Leech, faded out as Wrath of God was cast by Guevin. The next turn, Guevin was finally able to go "into the red zone for the first time," and he started attacking with the team of Angels.

The last attempt to stay in the game was made when Frayman Wax/Waned his Birds of Paradise and blocked one of the Angels, he then attempted to Wax/Waned it a second time. The second Wax/Wane was Absorbed by Guevin and that was game. 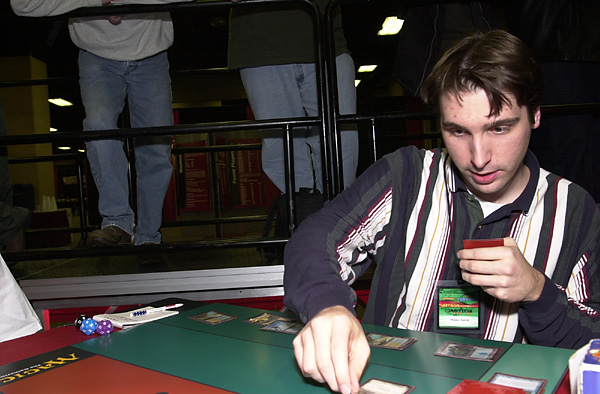 Birds of Paradise, Blastoderm, Llanowar Elves, and Sterling Grove were all in play when Guevin was knocked down to 14. The next turn Guevin Counterspelled Frayman's attempt to cast a Noble Panther. Frayman then attacked and Guevin let him know, "a touch down and a two pointer and you got this one."

Guevin then played Mageta the Lion. Frayman prevented Mageta from clearing the board by casting Armageddon and Tangle Wire. He continued attacking with his Llanowar Elves and had Guevin down to one when he cast Canopy Surge for the win. Frayman said, "I just wanted to see his reaction."

Guevin admitted, "That was a slap, that was a slap. I didn't think you had any direct damage." Canopy Surge definitely is tech in a Green White deck.

Guevin had the answer to Chimeric Idol and Tangle Wire with Disenchant and Dismantling Blow respectively at the beginning of game three. Frayman then cast a second Tangle Wire and failed to draw a forest, or a third land. He did manage to peel a forest off the top on turn seven and cast the Llanowar Elves. Mr. Guevin then told him, "You're so lucky."

An Armageddon was Foiled by Guevin and Frayman followed up with Birds of Paradise. Frayman cast a Kavu Chameleon and Noble Panther only to have the board cleared with Wrath of God. He then cast Saproling Burst and two River Boas to Guevin's team of two Blinding Angels. The Blinding Angels got in some damage but were unfortunately faded out of the game with counters from the Parallax Wave that Frayman cast. It was all rather inconsequential as the extra turns then ran out and the match ended in a draw.