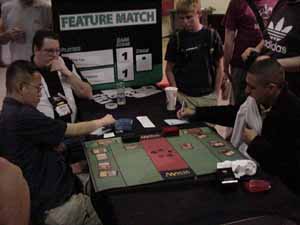 This round saw the ever-loving blue-eyed Gerard Fabiano facing down Tony “The Shark” Tsai. Both were in a chatty mood, probably a result of their 5-0 records. Tsai was with red-white “Slide”, though he’s only running two copies of the eponymous enchantment. Fabiano is with Goblins. To start the match up, Tournament Organizer Mike “The Big Gups” Guptil swung by and told the competitors that they would have to roar every time they sent a creature into the Red Zone. It was not greeted by great yelps of enthusiasm.

Fabiano’s first turn Goblin Sledder was Spark Sprayed, and he followed up with a second. He swung in.

“I love it! This is the best rule in Magic!” – Mike Guptil

“That was a pathetic roar.” – Tony Tsai

Gempalm Incinerator from Tsai kept it from dealing damage. Fabiano tried a Goblin Sharpshooter next, but it too fell to the Spray. Finally, his Warchief stuck, and he let out a triumphant roar. Tsai cycled a Steppe at the end of his turn, then played a land and passed it back. Fabiano busted out Goblin Sledder and Sharpshooter, but swung with just the Warchief.

Tsai played another land and held back. Fabiano swung in. Tsai tried a Starstorm for three. Then the two of them tried to use the stack, and all hell broke loose. Fabiano clearly wanted to rescue his Warchief, but neither player could figure out how many times he’d get to shoot with the Sharpshooter. Eventually it was agreed to be two. That was soon corrected to one when they realized that the Sharpshooter would have to be sacrificed before the Sledder.

“We are so bad, it’s embarrassing.” – Tony Tsai

With those shenanigans out of the way, it was back to business. Tsai made an Angel.

“I think I’m gonna show my hand to this guy, afterwards he can tell me if I made the right play.” – Gerard Fabiano 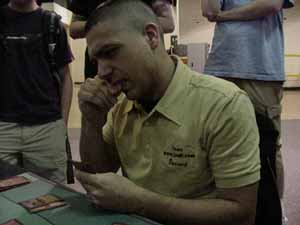 He summoned a Clickslither and bashed. Tsai blocked, and Fabiano was happy to eat the Warchief to kill the Angel. Unfortunately for him, Tsai had a second. Fabiano drew and showed him three Shocks. Tsai had still more gas, this time Eternal Dragon. That stopped Fabiano’s attack. They waited a turn. Fabiano found a Siege-Gang Commander and played it.

“Who doesn’t attack there?” – Tony Tsai

Tsai Vengeanced away the board.

“I should have attacked.” – Gerard Fabiano

Now Fabiano was out of cards. Tsai was free to have fun with Rift and a morphed Angel. He flipped it up and started swinging, and soon the game was his.

“Think hard. What is Gerard siding in? He’s gonna kill me in my sleep if I keep this up.” – Tony Tsai

Fabiano led with a Prospector that Tsai axed with Spark Spray. Both players played their second land.

“Who wants to hear a joke?” – Gerard Fabiano

Fabiano got in with Goblin Warchief, and then when Tsai had nothing to do, a Siege-Gang Commander. Tsai’s fourth land was Temple of the False God, not great. Fabiano made it mercifully quick with Clickslither.

Afterwards it was revealed that Tsai had forgotten to play a Lightning Rift.

“I was just slowplaying it. I figured if Osyp can win a PT with it, I could try it at a Grand Prix.” – Tony Tsai

Fabiano led with Skirk Prospector, but Tsai had a turn-two Rift, and so Fabiano waited on his Goblin Warchief. Sure enough, when he cast it next turn, Tsai was ready with a cycled Secluded Steppe. Next turn he tried Clicksliter, and Tsai cycled away Spark Spray in response to get rid of the Prospector. 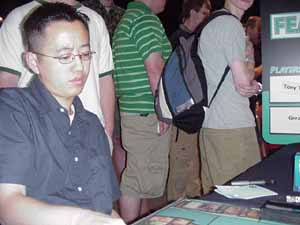 He agonized over his next play. Eventually, he chose to Vengeance away the board after swinging for two. Fabiano played a third Clickslither and dropped him to four. Tsai erased it with a Starstorm. Down came the Sulfuric Vortex. It dropped Tsai to two before he could Vengeance it away. Fabiano smiled and played a Siege-Gang Commander with two mana left over to take the game.

“I must have misplayed this. I don’t know how, but I must have. Look at this draw!” – Tony Tsai

“It just happens Tony. There was nothing you could do.” – Osyp Lebedowicz