These two giants of the Japanese Magic community are both looking to make a comeback this year. And, at 3-2, both are hoping for a win to put them in a favorable position for the draft and preserve their chances of making Top 8. With both playing Opposition decks, this match promised to tense. 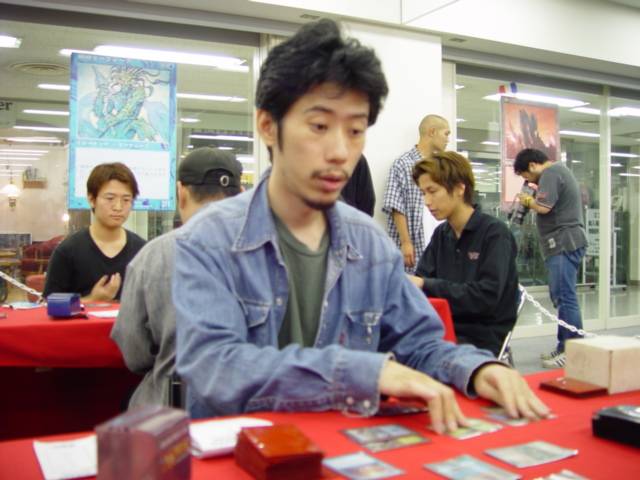 Masaya MoriMori's aggressive deck put early pressure on Tsukamoto with a second-turn Wild Mongrel, but Tsukamoto patiently played his deck at his own pace, putting the pieces of his combo together starting with a third turn Squirrel Nest, followed by a fourth turn Opposition. With Mori stalling at three lands, Tsukamoto cast a Wild Mongrel using it with a squirrel to begin tapping Mori's Bird of Paradise and lands, denying him access to blue mana. This pattern continued for several turns, with Mori eventually using a Fact or Fiction in his upkeep to garner some extra land and a Merfolk Looter. Producing an Arrogant Wurm via a discard to his Wild Mongrel at the end of that same turn, Tsukamoto began attacking with it, putting Mori on a 3-turn clock while continuing to use his Opposition to keep Mori from using any card with blue in its casting cost. Unable to draw any burn or stop the Wurm, Mori reached for his sideboard, giving the first game up to Tsukamoto. 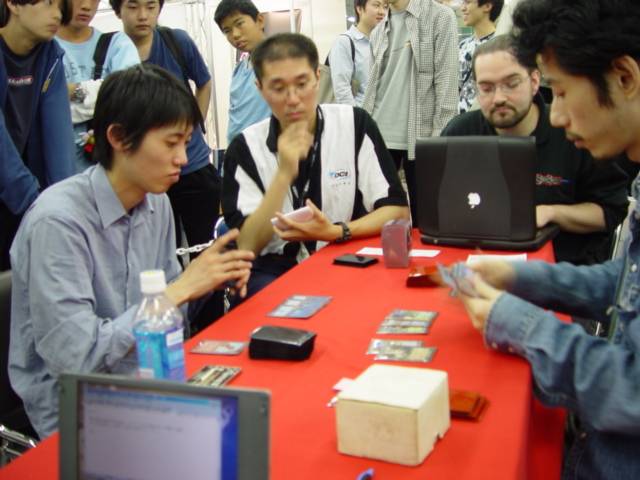 The second game began almost the opposite of the first, with Tsukamoto playing a second turn Wild Mongrel, only to have Mori play a third turn Opposition with the help of his Birds of Paradise. After Tsukamoto missed land drops two turns in a row, Mori started using the Birds to lock down Tsukamoto's only Forest, forcing Tsukamoto to play the game on his terms, while using a Merfolk Looter to gain card advantage. Missing the Squirrel Nest he needed to fully take control of the game, Mori began using Ice to tap Tsukamoto's lands and draw cards in addition to using the Looter. Although he wasn't able to find a Nest, he did come up with something equally as good--a Flametongue Kavu, which he used to remove a Bird of Paradise Tsukamoto had produced to attempt to get around the mana lock he was under. After an exchange of Circular Logics, Tsukamoto managed to play his own Opposition, but with only one creature, he was still under pressure from Mori's growing army of creatures. Mori finally managed to find a Squirrel Nest through a Fact or Fiction, which he played after sacrificing a Flametongue Kavu to draw a counterspell. Tsukamoto conceded after the Squirrel Nest hit the table. 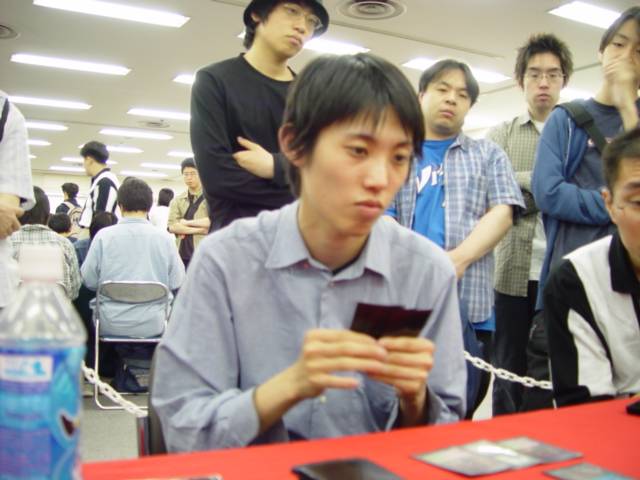 With 15 minutes left in the round, both players shuffled quickly and started the deciding game. Tsukamoto established tempo early, going for broke with a third turn Squirrel Nest, gambling that Mori didn't have a counter. Things didn't get any better for Mori when his missed his turn four land drop, and was forced to discard. Sitting on a handful of red and green cards with nothing but Islands out, Mori was forced to let Tsukamoto play Fact or Fiction, netting a Gainsay and Islands he needed to play Opposition. After Mori was forced to discard again, Tsukamoto went for the kill, playing Opposition with counter backup. Finally drawing into land, Mori tried to back a comeback, playing a Bird of Paradise and Merfolk Looter, but Tsukamoto didn't let up, playing a second Squirrel Nest. The game quickly became repetative, with Mori playing a Looter or Birds of Paradise, only to have them tapped by Tsukamoto's ever-increasing army of squirrels. With time running low, Tsukamoto made an Arrogant Wurm and began whittling away at Mori's life total. Unable to break the lock, Mori was soon finished off by the Wurm.