Round 6 Feature Match: Walking All Over

This match was all about the enchantments of the Czech team: Burning Earth in seat A, Curse of Death's Hold in seat B, and Spectral Flight in seat C. When respectively matched up against Sphinx's Revelation, Garruk, Caller of Beasts, and Liliana of the Veil from Team Singapore, the question was the following: would the enchantments prove strong enough, or would the planeswalkers take the win?

For the Czech team, the decision process on the Unified Standard configuration was led by Pro Tour Return to Ravnica champion Stanislav Cifka, the only player with Pro Tour experience on the team. The Czech team captain had been considering Blue-Black Control, featuring Nephalia Drownyard as its main win condition, for the Standard portion of the World Championship. Although he switched to another deck at the last minute, he felt his deck had a good matchup against Blue-White-Red Flash and didn't take away many cards from other decks. Given the team-wide restrictions of the Unified Standard format---you cannot play more than four copies of a single card between your team's three decks---this absence of overlap was very important. Notably, Blue-Black control has no use for Hallowed Fountain, which meant that the Czech team could fit in Bant Hexproof as well. They rounded out their choices with Gruul Aggro. Tada! No overlap at all!

Team Singapore, a team that featured a squad of veterans, took a similar, yet different approach for their Team Unified Standard deck selection process. The similarity was that they also chose a control deck with Nephalia Drownyard, which would provide a good matchup against the onslaught of Red-White-Blue Flash that everyone was rightfully expecting. The difference was that they added white for Restoration Angel and Sphinx's Revelation. In other words, an Esper deck. Now, Esper does need Hallowed Fountain to be able to consistently cast its multi-colored spells, which made it very difficult to run Bant Hexproof next to it. Instead, they went for Jund and Selesnya Ramp. Jund was chosen because it is a clear tier 1 deck, the Singaporean team told me afterwards. Selesnya Ramp was merely fitted in Jenga-style because most of its cards were not used in other decks. 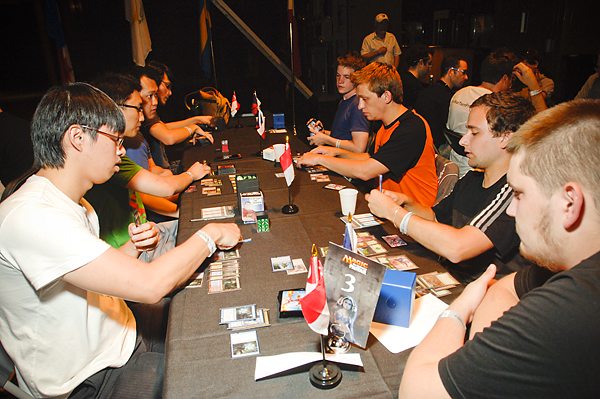 The sixth round featured two teams that tackled the Unified Standard deck building process in different ways than many. Which team's deck selection would reward them?

On to the games!

In Game 1, the players went toe-to-toe for a while, with Mendl trading off his green creatures against Chew's black removal. Eventually, Chew managed to stick Restoration Angel in play, which proved to be brutally effective at pecking off Mendl's Domri Rade. When the Angel died a few turns later to Mizzum Mortars, Chew started activating his Nephalia Drownyards, which dwindled down Mendl's deck in short order.

Game 2 showcased the power of Burning Earth. When it hit the battlefield, Mendl had three basic lands in play, whereas Chew only had non basics. This meant that Mendl could easily cast his creatures without taking too much damage, whereas Chew's life total fell every time he tapped his lands to cast his removal spells. Those removal spells certainly managed to clear the board, but Chew quickly fell to 3 life. Although he was holding a hand full of excellent cards such as Sphinx's Revelation, he was unable to cast them without dying. When Mendl drew another haste creature, it was over. 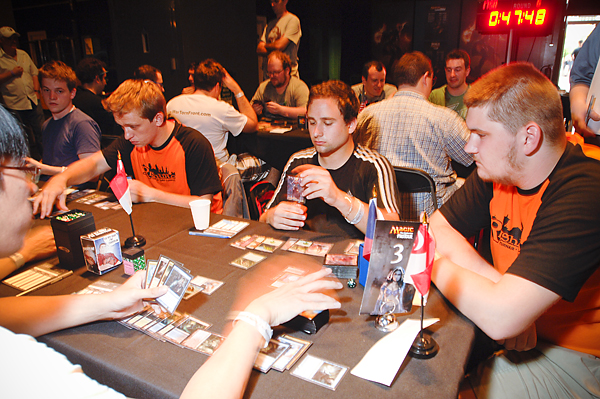 The Czech team decks take very little from each other in the Team Unified Standard format.

And before it could finish, the team match had concluded. Which team won though? The answer to that lies in the other matches and their results.

In Game 1, Cifka made the conscious decision to spend his mana on flashing back Think Twice rather than on removing Khoo's Arbor Elf and Elvish Mystic. It cost him. By allowing Khoo to keep his mana creatures in play, the Singaporean was able to cast a turn 4 Garruk, Caller of Beasts, and Cifka did not have countermagic to stop it. Nor did he have a good game plan against it, as his deck had a distinct lack of creatures that would allow him to attack the planeswalker. Cifka tried to claw back with Ratchet Bomb, Opportunity, and Curse of Death's Hold, but he was fighting an uphill battle against Garruk. Eventually, the planeswalker called in Craterhoof Behemoth, and Cifka picked up his cards. 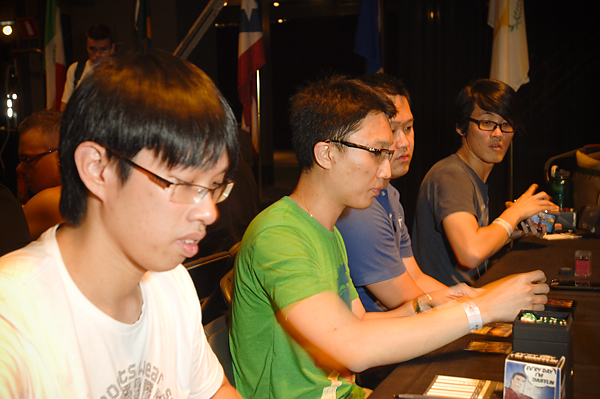 Singapore's deck selection proved to be invaluable in this event.

In Game 2, Cifka kept a hand with double Curse of Death's hold, but it turned out to be a turn too slow. Khoo had Elvish Archdruid to protect his mana elves and managed to keep a Wolfir Silverheart around. Let me tell you: two +4/+4 effects beat a global -1/-1 effect.

Game 1 was over incredibly fast: Janda enchanted Geist of Saint Traft with a ton of auras, and only needed a couple attacks to close out the game. Benedict's targeted removal spells were ineffectual against Geist of Saint Traft, leaving him defenseless.

In Game 2, Benedict revealed that his deck had some ways to deal with hexproof creatures after all: Liliana of the Veil forced Janda to sacrifice his Invisible Stalker, and Bonfire of the Damned took care of Sigarda, Host of Herons. Without creatures but with too many enchantments in hand, Janda was on the back foot. A few turns later, Olivia Voldaren flew in for the kill.

Game 3 was a somewhat anticlimactic end to an otherwise interesting match. Janda had to take a mulligan in search of a reasonable hand, and then had to go down to five. The five-carder he kept was mediocre, and the top of his deck did not reward him. Benedict, in the meantime, showed that efficient creatures such as Scavenging Ooze will duly punish any stumble.

"The matchups just fell correctly," all members of the Singaporean team agreed. Indeed. Although Burning Earth matched up well against Sphinx's Revelation, the other two matchups appeared favorable for Singaporea: Garruk, Caller of Beasts triumphed over Curse of Death's Hold, and Liliana of the Veil defeated Spectral Flight.