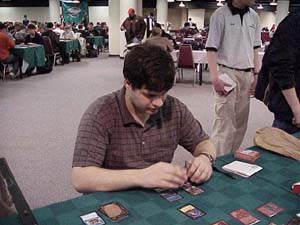 In this jovial and boisterous match, two players who should be quite familiar to Sideboard readers paired off. Zvi Mowshowitz has become one of the most prolific Magic writers as well as one of the games most successful players. He is coming off of a top eight in Pro Tour Chicago and even more impressive his win in the very recent Pro Tour Tokyo. Nathan Heiss is a member of the formidable Team CMU, and also a prolific writer. His best accomplishments include a top sixteen at Pro Tour Rome. He was one of the few players to successfully play a Survival of the Fittest based deck at that tournament; Mowshowitz was one of the many who were less successful with the deck. Heiss is "undefeated" versus the Tokyo champion, 1-0, but it is hard to imagine putting anyone as a favorite over Zvi with the streak he is on.

Zvi wins the roll and chooses to draw. Whether to play or draw in Invasion sealed deck has been much debated among pros this weekend. Many of the best decks can come out slow, and getting a fast aggressive start while playing first can leave your opponent dead with many spells in hand. On the other hand, almost all sealed decks in this block are at least three colors, and drawing first helps insure a smooth mana draw. Zvi explained that he feels his deck and play are so good that the only way he can lose is to mana screw or a "God deck," so he intends to play second all day long. The decision seemed to be a good one, as despite going second Zvi plays the first creature, a Tidal Visionary. Nate answers with an Andratite Leech. Zvi comes back with a Caldera Kavu, threatening a counterattack. Nate follows with a Shoreline Raider, a seemingly perfect answer. However, Zvi plays a Slingshot Goblin, causing a frown from Heiss. Further consternation follows from Nate, as he has still not drawn his third color of land and is forced to do nothing for several turns. He is holding a number of red cards including Magma Burst, and also has a Death Bomb and Agonizing Demise which he cannot play to good effect due to Zvi's early Tidal Visionary. Mowshowitz continues to build an army while Nate fails to draw Mountains, and the game is soon over. This game is a fitting testimonial to the importance of drawing first; a mountain for Heiss would result in a much more interesting game. 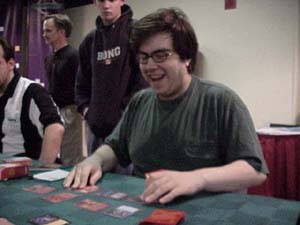 Nate plays again though, and this time he plays the first turn Visionary. Luckily he also goes straight to all 3 colors of mana, while Zvi has no Swamps. He does manage to Exclude Heiss' first real threat, and follow up with an Ancient Kavu. Nathan plays the Shoreline Raider once again, an excellent defense versus much of Mowshowitz's deck. Zvi's cry of "Swamp please!" is answered with a swamp off the top. He uses it to cast a Phyrexian Slayer, but Heiss is ready with a Burst with kicker. Zvi draws a Chromatic Sphere to play Duskwalker. Nate has an Exotic Curse but nothing to put pressure on Zvi. Zvi on the other hand keeps up the pressure nicely with Morgue Toad and Caldera Kavu. Heiss casts Probe with kicker to try to find some creatures, and evidently does as he discards a Morgue Toad and a Zap. Zvi is virtually unaffected, dropping Slingshot Goblin and Andradite Leech. Nate still has nothing and is forced to cast Allied Strategies. Heiss musters a Marsh Crocodile to hold off Zvi's team, and also force Zvi to discard Probe in order to keep Void (now we can see why Zvi was impressed with his deck). 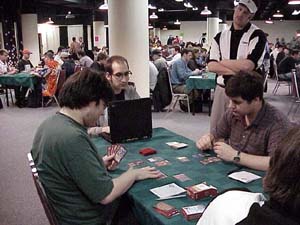 Heiss also uses Lightning Dart combined with the Visionary to kill Zvi's Slingshot Goblin saying "That thing is good against me!" Zvi finally has run out of creatures and says done. Shoreline Raider and Andradite Leech come out to defend for Heiss. The Leeches trade, and Mowshowitz casts a pivotal Plague Spores on the Shoreline Raider and Nathan's only Swamp. Nate has a Fact of Fiction though, which reveals 4 lands and a Kavu Recluse. Nate takes the four lands, including the precious Swamp, which lets him cast Urborg Drake. Nathan's card advantage has finally kicked in it seems, as he holds five cards to Zvi's three and has stopped the onslaught. Zvi has been holding that Void though. He casts it for four just to take out the Crocodile, but it also reveals two removal spells, Demise and Death Bomb! Nate laughs and shrugs as his hopes of a comeback slip away. Zvi then plays Trench Wurm and Smoldering Tar. Nate draws, shakes his head and reveals a hand of five lands.