penultimate round for Day One of Pro Tour-Charleston saw two teams facing elimination in the Feature Match area. Antarctica was one of the most dominant teams on the face of the planet when team play was introduced. When Jon Finkel was inducted into the Hall of Fame, he decided to get the gang together - a special perk of being in the Hall of Fame - and see if they could still hit the high notes. 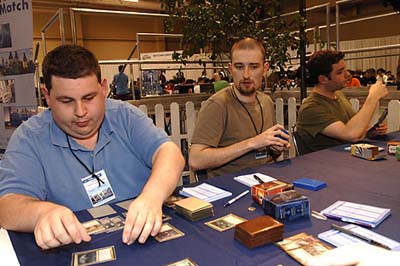 Steve OMS, Jon, and Dan OMS had battled back from an 0-3 start.

Things had not gone well to this point. The team started out 0-3 and was fighting to reach .500 and stave off elimination. The opponents standing in the way of Jon, Steve O'Mahoney-Schwartz, and Dan O'Mahoney-Schwartz were Jerret and Tana Sitting In A Tree. Jerret and Tina was made up of Pro Tour-Philadelphia Top 8 competitor and constructed deck specialist Jeff Novekoff, JSS Champion Jeff Rabovsky - playing in his first Pro Tour - and Michael Bernat, a regular contributor to the PTQ Top 8 decklist pages.

They qualified for the event on rating - just barely, though. "We had exactly 6000 rating points between us," laughed the JSS Champion as he shuffled up for his match against Steve OMS. Jon was playing Novekoff in the B seat and Dan was fighting with Bernat at the far end.

Both players mulliganed, and Jeff then went down to five. He took two to play a second-turn Selesnya Guildmage only to have it breathe its Last Gasp. Steve had no other action until a Blind Hunter and Ghost Council arrived on their appropriate turns (if you think that Ghost Council only costs four mana to play, you may also be wondering why your Ghost Council dies so often!)

Rabovsky's first play to stick around was Patagia Viper. Steve played Teysa before attacking. Rabovsky blocked the Blind Hunter with the Viper and chumped the Ghost Council with a token. Steve put damage on the stack and sacrificed his Blind Hunter to 'untap' his Ghost Council. He also haunted the token that was due to die. Rabovsky fell to four.

Rabovsky threatened to climb back into the game with a pair of Loxodon Hierarchs but Steve kept attacking with his Teysa token and Ghost Council. A turn later he cast Supply for four tokens but Steve had some tokens of his own - bat tokens.

Jeff was at six and when Steve attacked with everyone, he fussed with his blocks and tried to figure out the optimal way to not die.

"You are going to take five from the fliers and I am going to use Ghost Council," shrugged Steve, who was aware of the clock ticking. "I won't forget."

Both Jon and Dan had dropped a game and Game 2 was looking pretty grim for Dan as well. He had two of his double lands chaffing against their Dream Leashes. Two Angel of Despairs had swooped in and done their thing to another pair of lands. Staring down 10 points of flying and artificially mana-screwed, Dan lost and put Steve and Jon on a must-win mission.

Things were looking bad for Jon. His Crime//Punishment was Overruled and his opponent got out the mirror-breaking Muse Vessel. Jon attempted to Angel of Despair it but Novekoff seemed to have more than one answer to choose from.

"You are going to be impressed with how good I am at this game," Novekoff grinned as he showed a second Overrule. Jon did manage to resolve Debtors' Knell a turn later and things started to swing around.

Jeff Rabovsky came out fast with Selesnya Guildmage, Azorius Herald, and Hierarch. He was trying to figure out his next play but could not decide between two cards in his hand. He turned to Novekoff for some assistance but was shaken off. 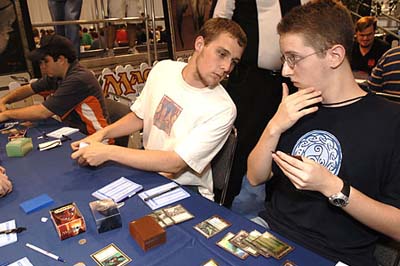 Jeffs Novekoff, left, and Rabovsky consult on the right play.

"Just play one. It doesn't matter which."

Rabovsky looked disturbed by the rebuff but Finkel explained why Jeff-B could not divide his attention, "If you win this game it is over. This is the important game right now."

What Novekoff was trying to focus on was exacting every last point of damage he could from each attack step with an army of Court Hussars. Jon had had an awkward time getting his board stabilized - what with the Muse Vessel and all - and could not keep Jeff's Angel in play long enough to reap a substantial life gain off of it and had to trade it with another angel. Demonfire for exactly enough - Jon counted the mana twice to be sure - was the finishing blow in Antarctica's comeback build.

What I found very interesting was that after losing, Jon did not wash his hands of the match. He did announce that Steve would ultimately concede his match - "but only if you play it out" - and he and Steve settled in to figure out how best to attack Rabovsky's daunting board. The younger player didn't seem to mind either. The JSS Champion was playing in his first Pro Tour, had just knocked out one of the most successful threesomes in the history of the game, and was now had a front-row seat to watch two of the game's greatest talk their way through the decisions in a tight game of Magic.

While the Antarctica members were disappointed with their finish, they were still very much in love with the game. Dan OMS was thinking about cashing in a ratings invite to Kobe, Steve was eyeing the schedule of PTQs for the weekend, and Jon was asking precisely which weekend Kobe was taking place come October.