Round 6: Gab Tsang vs. Sam Lau

Gab and Sam played on the same Canadian Nationals team three seasons ago. That team made it to the finals against a formidable American team. Sam lost to none other than Aaron Forsythe and Gab Tsang beat Frank Hernandez. Neither player devotes much time to the game anymore but they are both undefeated to this point and threatening to make another run. "Just prereleases and Nationals," explained Sam

Sam made the first play of Crypt Sliver—despite being on the draw. Gab's third turn yielded a Wirewood Elf but no land. Sam's third turn was similarly barren. "We are terrible!" exclaimed Gab when Sam missed his drop. When he found a land waiting for him on his next turn he amended the statement, "You are terrible!" Gab played his Swamp and made a Wirewood Savage. Barren Moor was Sam's next draw and when he complained it prompted a taunting outburst from Ruckish spectator Mark Zajdner, "Don't be greedy Sam!" Sam shrugged him off and played Lingering Death on the Savage. 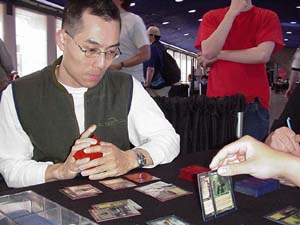 Elvish Riders joined Gab's team while a Bladewing's Thrall came down for Sam. The next turn for Gab saw Nefashu hit play. Once Gab saved the Nefashu in combat—using Wirewood Pride—and an 11/11 Ancient Ooze joined the team, Sam conceded.

Both players kept their openers and Sam kicked things off with a morph—Silent Specter, which was faced up on turn five. The game went pretty much like you would expect.

Gab kept a two-lander with all green cards and a pair of Swamps. Sam mulliganed his no land hand but kept the next six.

Gab drew his Forest to play a third turn Wirewood Savage. Sam came back with a morph. Gab played a Wirewood Channeler and passed back the turn. Sam's morph got into the red zone for some damage and was joined by anther facedown creature. Gab played a Wirewood Elf and a Needleshot Gourna on the next turn--drawing a card in the process. Sam had the Skinthinner ready and killed the Needleshot and got in for four more points.

Gab sent in all of his elves and played Nefashu. The game was slipping away from Sam and he played a Corpse Harvester but missed his sixth land drop. Gab sent everyone into the red zone to square off with Sam's incredible shrinking team and the best block he could find was Corpse Harvester on Wirewood Elf—he took 9 and went to 6. Gab played another Wirewood Savage.

Sam looked for an out. He looked so long that Head Judge Marc Hernandez had to ask him to do something. Ultimately he sent the turn back to Gab with no play.

Gab, on the other hand, cast an unamplified Canopy Crawler, which drew him TWO cards. Krosan Vorine drew him another two. Sam had not drafted an Infest—a Decree of Pain was counterdrafted in the last pack—and he scooped.