Round 6: Gary Talim vs. Ben Seck 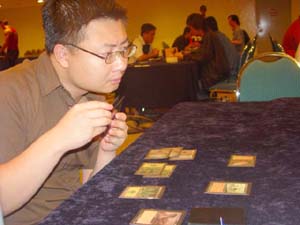 With both players having only 1 loss coming into this round, there was a Day 2 birth on the line here. On one side of the table stood Gary Talim, from Los Angeles who has come fresh from Pro Tour Venice with a solid 41st place. On the other side, was Ben Seck who is trying to become only the third player to win a 3rd individual Grand Prix title.

Talim won the toss and elected to play, cycling a mage's guile before the obligatory 3rd turn morphed creature, which Seck followed with one of his own. They happily traded these (Talim - Riptide Biologist, Seck – Trashing Mudspawn).

Talim then gave Seck some huge headaches with a Goblin Clearcutter with a Crown of Fury. Seck was able to chump block for 3 turns with a Symbiotic Elf, while returning for 4 a turn with a Branchsap Lorian on the transition, bringing Talim down to 8. Finally it ran into an unmorphing Skittish Valesk. Gary scored his first damage as the enchanted goblin eventually got through the defences as Seck was unwilling to lose his Soultiller as a chump.

Seck Stabilised with a Silklash Spider, but you can only block so many things at once as he faced a Macetail Hystradon as well as the other Onslaught of fatties. With he scores equalized at 8 it turned into "Who Dares Wins" scenario, Talim getting the nod with a Choking Tethers that Seck could do nothing about. His only real worry was Vitality Charm – which was not forthcoming.

With a third colour added, Seck stood ready to attempt to equalize he match. This was not helped by the fact his first creature drop was the 5th turn Soultiller. This gave Talim not only the advantage of the extra card with drawing but the tempo as he pushed early with a Keeneye Aven. 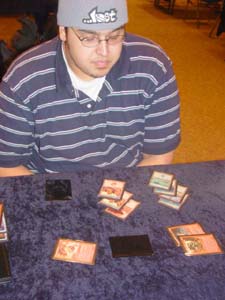 Talim dropped a Crested Craghorn but failed to attack, arming it up a Crown of Fury, and taking out Seck's incidental army of random morphs. The 'tiller had been the star for Seck, (due largely to the fact that a Callous Oppressor had locked his entire hand) and had pushed for 10 damage before being doubled blocked by the Aven and a morph. Seck cycled a Primal Boost only to have the morph roll over as an Echo Tracer. Kicking himself for not stacking damage, he further berated himself for using 2 of his three forests to cycle the boost. Unable to replay the tiller and with no other elves in his hand Seck was dead in the water. Another morph and the Aven dragged Seck down to 12 with card quality being fixed with a Sage Aven. The Craghorn was taken out with a Pinpoint Avalanche, revealing why so much red was left untapped. Another turn with the fliers attacking and a Warped Researcher on Talim's side if the board gave Seck little solace as there was still nothing he could play but the tiller without it being stolen. The next attack brought him down to just 1 and Talim cycled a Solar Blast if his own for the win.