Round 6: Itaru Ishida vs. Jarron Puszet

In the 5-0 bracket we see Itaru Ishida of Japan, take on Jarron Puszet of Australia. Puszet won the roll and elected to draw first.

Ishida opens with a Silver Myr on the second turn, with Puszet following with an Iron Myr of his own. Ishida made the most of going first with the extended manabase by swinging for 2 on the third turn with a Vulshok Berserker. It came in for another 2 with Puszet needing to hold to defend his Wizard Replica. 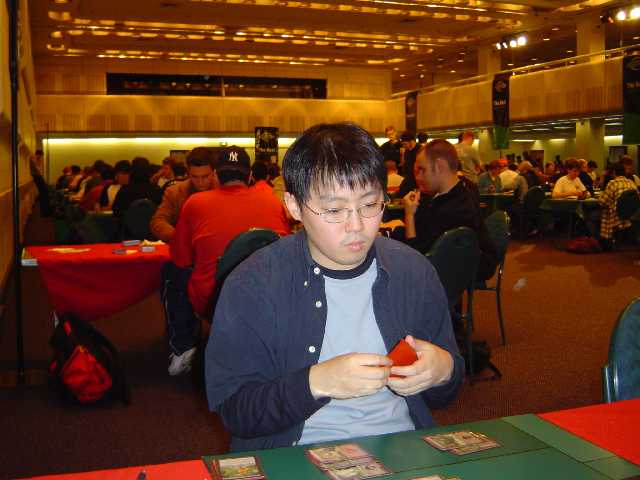 No drops on the 5th turn from either player, but they were more than willing to exchange attacks as the flier of Puszet and the Goblin Replica of Ishida sneak in. Ishida was being spell shy due to the replica, but Puszet was allowing Ishida to attack into a Needlebug (taking out the Myr).

Ishida managed to summon a Bottle Gnomes through the Wizard, but. Still not willing to give up his Wizard, Puszet let Terror resolve against the Somber Hoverguard and was content to trade the Needlebug with the berserker (double blocked with the wizard).

A second Somber Hoverguard saw play as Ishida continued an unlikely attack with an equipped Bottle Gnomes (Bonesplitter), Puszet followed with a Hematite Golem, which was double blocked by the equipped Gnomes and a Disciple of the Vault. This put Jarron to only 4, a large price to pay for board control.

Ishida made the most of having no creatures in play with a Barter in Blood limiting Puszet to a Somber Hoverguard.

The game was brought closer as Puszet pushed forward with the Hoverguard , playing fodder for the blockers in the form of 2 more Iron Myr. The problem however was that the Vorrac trampled through putting him to 1 life.

1 was enough however, as the Yotian didn't trample, and after one last draw Ishsida scooped and headed to the sideboard.

Ishida elects to play and both players are happy with their opening hands. Again both players again have a second turn Myr for their mana acceleration, Except with Ishida is able to attack with his, dropping a Goblin Replica. On the 4th turn Jarron summoned a Somber Hovergurad, before Shattering Ishida's Pewter Golem. 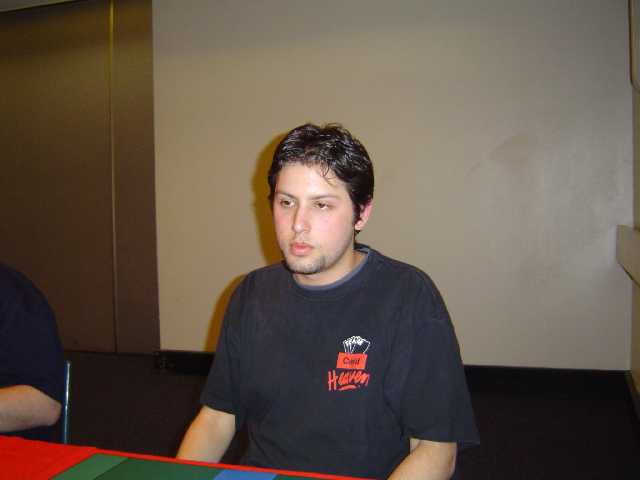 With a Wanderguard Sentry, Puszet is again able to see what's coming in Ishida's hand (Clockwork Vorrac & Bonded in Blood), but realizes he is in trouble when this is followed with a freshly drawn Soul Foundry (Set to Vorrac.) Ishida took 8 from the attack that followed (Vulshok Gauntlets on the Yotian) leaving himself at 11, realising that the longer the game went, the more likely it was to go in his favour.

With the prospect of a wave a clockwork tokens, Puszet proceeded to drop his hand summoning a Krark-Clan Grunt and a Goblin War Wagon. This was followed with a Lightning Greaves enabling him to attack with the grunt. Ishida blocked with his replica, which picked off the gauntlets after damage was stacked leaving the grunt carrying lethal damage.

Needing an answer, and a very quick one Jarron cast thirst for knowledge discarding a Mountain and an Ogre Leadfoot to find the second Shatter that he needed for the Soul Foundry.

With 2 Vorrac tokens in play (4/4 & 5/5) the game was far from over. Ishida swung, squaring the life totals to 11 each. The greaves proved their worth as it enabled a Cobalt Golem to fly over on it's first turn, bringing Ishida down to a meager 9.

Puszet then took a Vorrac fron Ishida (5) with Ishida holding 1 back to block. Puszet sealed the game and the match with a Looming Hoverguard off the top to dispel the lone blocker remaining - not even a Shatter (War Wagon) and a Terror (Hoverguard)

With only 4 counters on a very tired Vorrac (Puszet), even with a hoversail, wasn't enough to get Ishida home as he scooped, and extended his hand to Puszet.