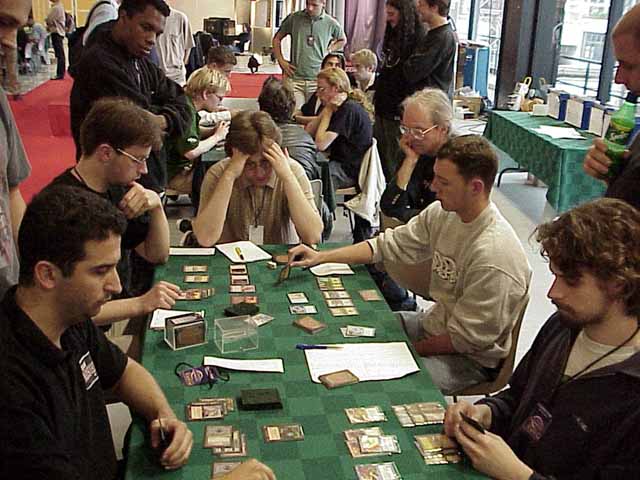 Each of these two players has a strong case for a title of the best player from his country. D'Hondt and Snepvangers are both firmly on the "Gravy Train" (automatically qualified for upcoming Pro Tours based on PT points). Seeing them face off in the 5-0 bracket surprises no one.

Snepvangers' White-Red deck is solid but not particularly impressive. Then again he managed a 2-0 record with it, following a 3-0 finish with a weaker deck. D'Hondt's deck on the other hand is quite strong. It is green-blue, but seems a bit creature light, especially for those colors.

Jean-Louis kept a creatureless hand in the first game. He drew a pair of Seals of Removal and a Withdraw, and was able to hold off Bram's early creatures easily enough. However, he did not see his first creature until turn 6. Luckily for D'Hondt, the first creature he did see was an Aerial Caravan.

Seal of Removal prevented Bram from being able to remove the monster. Eventually Bram was forced to trade his Arrest for a Seal of Removal, but D'Hondt only recast a second Seal, following the Caravan.

Throughout the game D'Hondt was holding a pair of Invigorates. At one point he was able to kill Bram by double Invigorating his Caravan, but chose not to do so. Although that may seem like a mistake, it was actually a well thought-out decision. D'Hondt felt that his board position was very strong and he would be able to win the game over the course of the next two turns. He chose not to reveal his Invigorates to Bram.

D'Hondt did use one Invigorate on his Thresher Beast to finish Bram off, but he was able to keep the second one hidden.

In the second game D'Hondt played a turn 4 Saprazzan Outrigger. Snepvangers' plan was to attack with his Laccolith Warrior, use it to shoot the Outrigger for 3 and finish it off with a Seal of Fire, while D'Hondt was tapped out. It seems like hiding the fact that he had multiple Invigorates paid off for D'Hondt, as Snepvangers took a chance on making that play. Surely enough, D'Hondt cast one of his Invigorates to save the Outrigger and kill Laccolith Warrior.

Things went downhill for Snepvangers from that point on. He drew a lot of lands while he needed creature and got beat down by Blastoderm and Silt Crawler. Snepvangers tried to clear the board with a Warmonger, only to run head first into another Invigorate. D'Hondt used an Ensnare to help deliver the killing blow.