Round 6: Jeroen Remie vs. Ben Ronaldson 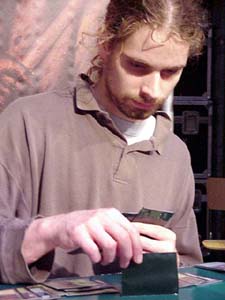 In the sixth round of the 2002 European Championship, Jeroen Remie from the Netherlands faced Ben Ronaldson from England. Both players had 4-1 records, looking for yet another victory to get an even better position before the second day of play.

Ronaldson got to choose whether to play or draw, and he chose to play. The Englishman kept his hand, and Remie did as well. The game started pretty uneventful, though. Both players played lands, then during his third turn, Ronaldson attempted to cast an Anurid Swarmsnapper. Remie didn't like it much, though, and the Swarmsnapper was Syncopated. Then, during his own turn, Remie got out a Cephalid Looter.

Ronaldson wanted creatures on the table, and during his fourth turn, he played Acorn Harvest, putting two 1/1 squirrels into play. The squirrels attacked as soon as they could, and Remie chose to block with his Looter—a good sign that he had some tricks up his sleeve. He did indeed have a trick. Before damage, he activated the Looter, then he discarded Glory and activated it to save the creature.

During his following turn, Ronaldson flashbacked the Harvest and got two more squirrels into play. Remie attempted to cast an Aven Fisher, but Ronaldson had a Grip of Amnesia, and the Fisher was countered. The Englishman really liked that Grip of Amnesia. After attacking with his squirrel Army, he tapped five mana and played Scrivener, returning the counter to his hand. "God," Jeroen sighed.

Looting away during Ronaldson's end of turn steps, Remie got out a Cabal Torturer. Ronaldson thought for a while during his own turn. "Three mana to activate Glory, right?" he asked, as Remie had only two mana untapped. Then he proceeded to play an Ironshell Beetle to put a counter on his Scrivener, before attacking for six, bringing Remie down to ten life.

Knowing Ronaldson had a Grip of Amnesia in his hand, Remie attempted to play Battle Screech. The Englishman chose to use his counter to prevent it from resolving. Wanting more cards, Ronaldson played a Deep Analysis before attacking. The Dutchman sighed, activated his Looter, and then he tried to Toxic Strength the Scrivener. But Ronaldson had yet another trick, and an Æther Burst sent the Scrivener back to his hand. Nonetheless, Remie found himself at six life only.

Finally, the Dutchman got out a creature with power more than one—a Phantom Nomad. Ronaldson was looking for something, though, and he flashbacked his Deep Analysis. Then he re-played the Scrivener, getting the Grip of Amnesia back once again. His Beetle didn't survive the turn, though, thanks to Remie's Torturer.

Ronaldson wanted to get through for those last few damage. He played two Shieldmage Advocates, then an Aquamoeba. Remie killed the Scrivener, and played a Benevolent Bodyguard. Ronaldson was still looking for something, and cast Obsessive Search, then Breakthrough for six. He didn't find it. A Hydromorph Guardian was promptly killed by Remie's Torturer. However, a Spurmage Advocate survived, and with five creatures in play to Remie's four, Ronaldson decided that it was time for an attack. He sent all his five critters into the red zone. The Dutchman thought for a while. Then he decided to block four of the creatures. Ronaldson played Keep Watch, drawing five cards, leaving only four cards in his library. Remie then activated Glory twice, naming white and green, and when Ronaldson activated the Aquamoeba to switch its power and toughness, Remie used the Torturer's ability to make it smaller. A Muscle Burst saved the Aquamoeba, but unfortunately, the reduced power and toughness made it unable to finish Remie off.

Instead, the two players started a race—the Englishman needed to get enough creatures in play to deal the last points of damage before running out of cards. Ronaldson played a Rabid Elephant. He played a Phantom Tiger. Then he played yet another Rabid Elephant, and while Remie was able to kill the Tiger, the Englishman still had one more attacker than Remie had blockers. "I attack," he said—but Remie stopped him and showed him a Lead Astray. "It is a very bad card," Ronaldson said and scooped, finding that the card he had waited for the entire game, a Windfang Drake, was the last card in his library. 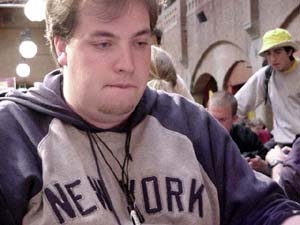 Ronaldson chose to play first in the second game as well. He kept his hand, and started out freshly by playing a turn one Obsessive Search and then a turn three Hydromorph Giant. Remie, on the other hand, played a turn two Rotting Giant. While the Giant couldn't stop Ronaldson's first attack, Remie then Syncopated a Phantom Tiger, and from then on, the Giant just stood there, effectively preventing Ronaldson from attacking.

Ronaldson played an Ironshell Beetle to put a counter on his Guardian. Then he played a Rabid Elephant. However, Remie's deck was very efficient. The Elephant was stopped by a Kirtar's Desire, and a Morbid Hunger forced Ronaldson to sacrifice his Guardian, leaving the Englishman with a measly Shieldmage Advocate and the Ironshell Beetle in play. Then, the Advocate was taken care of by a Coral Net.

At this point, Remie needed attackers, and he found them. As an answer to Ronaldson's Anurid Swarmsnapper, he played a Balshan Collaborator. Ronaldson drew four cards with a Deep Analysis that he played and flashbacked. Then he took two from the Collaborator. But Remie had more up his sleeve, and played Aven Windreader. "So you did have blue cards," Ronaldson remarked, looking quite dissatisfied.

To make a long story short, the last part of this game was all about Ronaldson drawing a lot of cards to find answers to the flyers, unfortunately ending up drawing land after land after land. Remie, who was at 21 life after flashbacking his Morbid Hunger, eventually finished him off with a Deep Analysis with flashback. And so the Dutchman won the game, the match and the three points. The End.